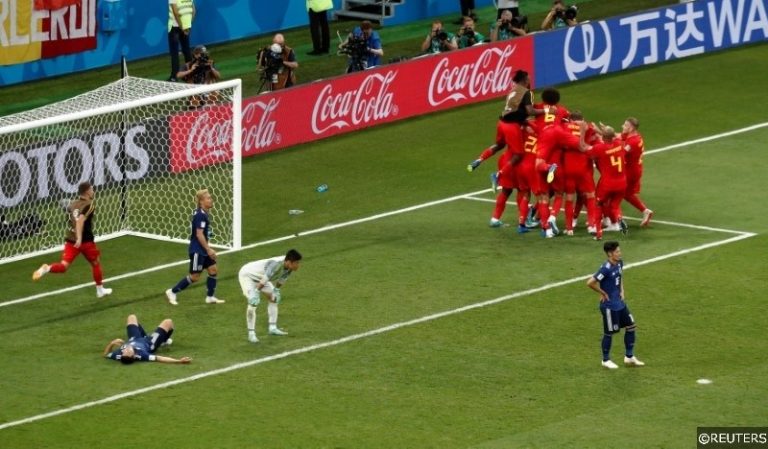 Glorious defeat can often hand football teams a redemptive salve of sorts, where failure can be masked and even smudged out by gallantry and valour. Even if a team’s efforts are ultimately futile, heroism can still thrive inside the tragedy of the story.

Against Belgium in the Last 16 of the 2018 World Cup, Japan etched out their own tale of glorious failure in front of a captivated crowd at the Rostov Arena. This was the very definition of a team going down swinging and when Japan threw their last ounce of energy into one final haymaker, they were caught with a devastating counter punch that left them seeing stars.

Read More: Where do Portugal go After World Cup Exit?

After a first forty-five that failed to set pulses racing, Japan started the second period with renewed vigour. Their pressing became more intense and more intelligent, forcing Belgium into panicky passes and errant touches. In possession, Japan were slick and dynamic with the excellent Shinji Kagawa conducting play from the crannies he found between the Belgian lines.

When Genki Haraguchi latched onto another sumptuous Kagawa through ball to angle his shot past Thibaut Courtois, the moment was as unexpected as it was spectacular. When Takashi Inui smashed a second in from distance just 240 seconds later in the 52nd minute, we entered the surreal.

Belgium were shaken into action, and their search for goals was helped by Japan’s incessant search for a match-killing 3rd, a hunt that opened up unnecessarily large gaps at the other end. When Jan Vertonghen’s header somehow arced over Eiji Kawashima and under the crossbar, it felt like an order was being restored. When substitute Marouane Fellaini nodded home the equalizer five minutes later, it reeked of inevitability.

Nevertheless, Japan didn’t allow themselves to be consumed by disappointment and they steeled themselves for one last charge at the Belgian goal. Deep into stoppage time, the Asians forced a corner. Japan loaded the box, but Keisuke Honda’s looping centre proved meat and drink for Courtois.

Almost instantly, the Belgian number one bowled the ball out to Kevin De Bruyne who galloped forward through acres of unguarded grass. With the Japanese defence panic stricken and caught in his jet stream, De Bruyne used the space created by Romelu Lukaku’s distracting cross-field run to slip a delicious through ball to the advancing Thomas Meunier on the right.

Meunier squared first time to the now centrally positioned Lukaku who cleverly skipped over the delivery, which in turn allowed Nacer Chadli to arrive unmarked behind him to finish the flowing move off in style with virtually the last kick of the game. It was a picture-book counter attack and a thing of footballing beauty.

Read More: Brazil Winning Matches if not Friends in Russia

After the game, Japan were criticised for their nativity, with observers castigating Keisuke Honda’s decision to look for a winner from Japan’s corner instead of keeping possession and bringing the game into extra time.

In hindsight it’s easy to apportion blame, though in the same situation, what team wouldn’t have tried to score a winner from a last-gasp corner? With their players running out of steam, defeat in extra time against the relentless Belgian’s would have been almost certain anyway. Honda’s corner at the death might have been Japan’s last opportunity to snatch the unlikeliest of victories. They took the chance and even though it backfired in spectacular fashion, they were right to roll the dice. 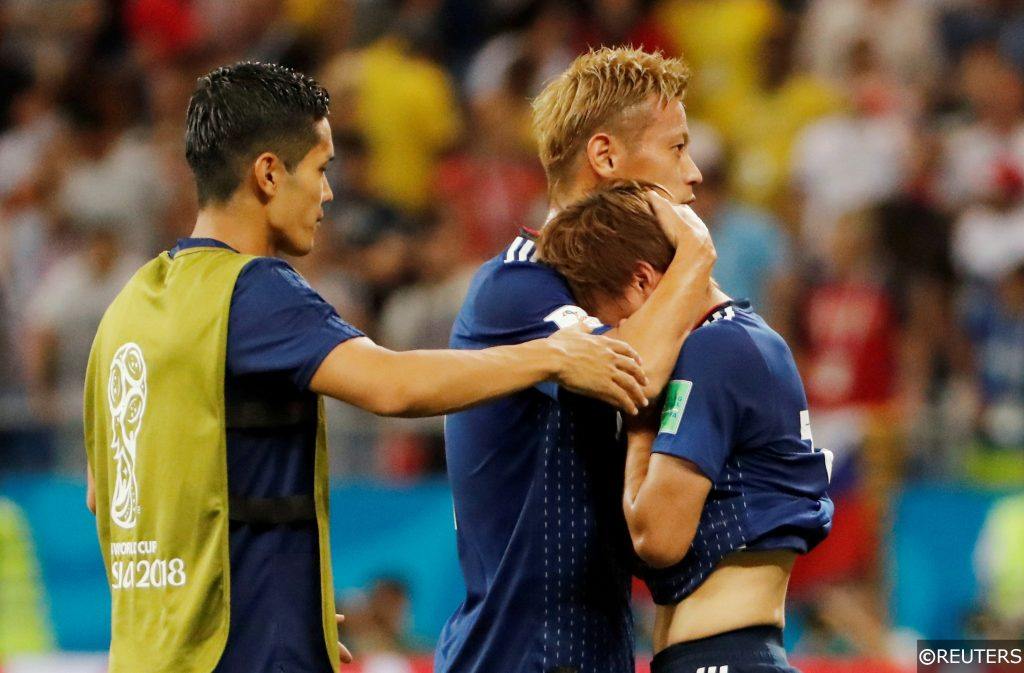 The 2014 World Cup in Brazil had been a chastening experience for Japan, after the Samurai Blue took just one point and scored just one goal in their three group matches against the Ivory Coast, Greece and Colombia. The crux of the squad taken to South America that year by their former coach Alberto Zaccheroni provided the foundations for this year’s selection.

In their homeland, the 23-man squad settled upon by Manager Akira Nishino had been dubbed “Old Man Japan” with many supporters fearing that the lack of regeneration within the Japanese ranks would hinder the team’s chances. Really, Nishino could be forgiven for filling his squad with safer options, especially when you consider he had only been in charge since April.

Nishino put his faith in experience ahead of the 2018 World Cup and just 7 of the other 31 competing nations in Russia had squads with a higher average age than Japan’s (28.6).  With the dust still settling on Japan’s campaign and dramatic World Cup exit, it’s unclear whether Nishino’s decision to favour old heads over youthful exuberance really paid off.

Read More: How Croatia Showed Another Side to Their Character Against Denmark 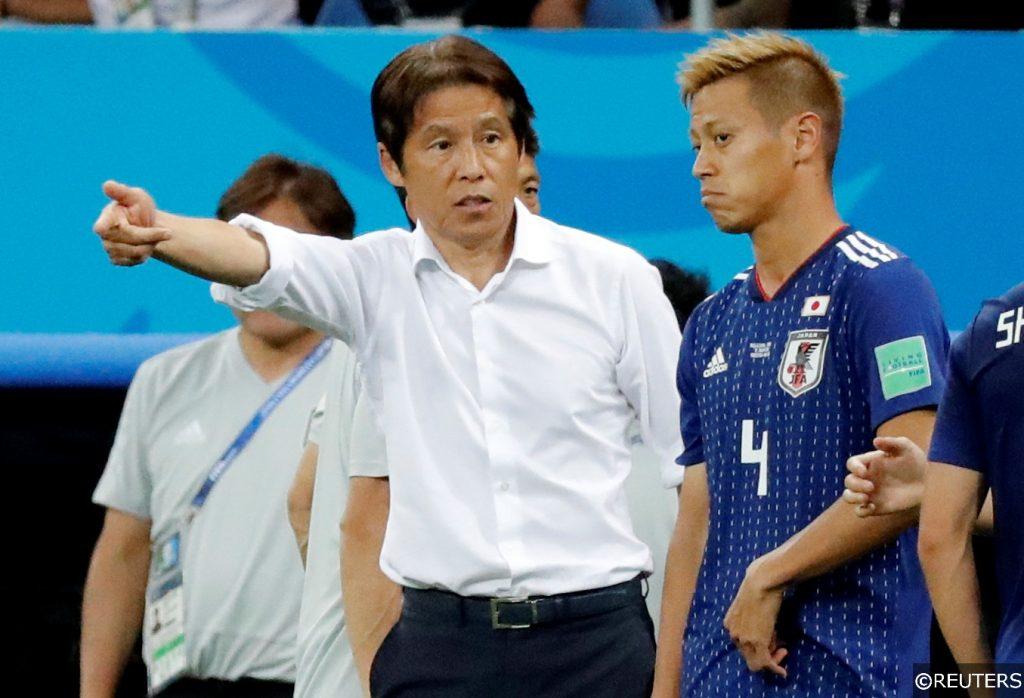 Japan’s performance and eventual exit at the hands of Belgium was memorable for the courage and fearlessness they showed in the face of overwhelming odds. However, commiserative kudos won’t offer much consolation to many of the players involved.

The 2018 tournament in Russia will likely be the last World Cup for a number of the members of Japan’s squad. Goalkeeper Eiji Kawashima is 35, left back Yuto Nagatomo turns 32 in September, forward Shinji Okazaki is 32, as is midfielder Keisuke Honda. Takashi Inui, who enhanced his reputation considerably after his performance against Belgium turned 30 on the eve of the clash, while their legendary skipper Makoto Hasebe is now 34. Main creator Shinji Kagawa will be 33 by the time Qatar 2022 rolls around.

What that all means is that Japan will have to usher in a new era sooner rather than later. The gradual changing of the guard that they had been delaying until now will have to become a much more accelerated process. Major upheaval can lead to uncertainty and inconsistency, meaning Japan could be in for a bumpy ride, at least in the short term.

It’s not all doom and gloom however – there are young, talented footballers ready and waiting to be introduced into the Japanese senior squad. 22 year-old Midfielder Masaya Okugawa and 23-year old striker Takumi Minamino are making waves with Red Bull Salzburg in Austria. 20-year old attacking midfielder Ritsu Doan is impressing with Groningen in the Eredivisie, while 22-year old striker Yuma Suzuki is winning plenty of admirers for his displays for Kashima Antlers.

There are doubts about whether Akira Nishino has the necessary motivation to oversee the overhaul, though maybe the courage he witnessed from the sidelines against Belgium will help to galvanise his own for what lies ahead.