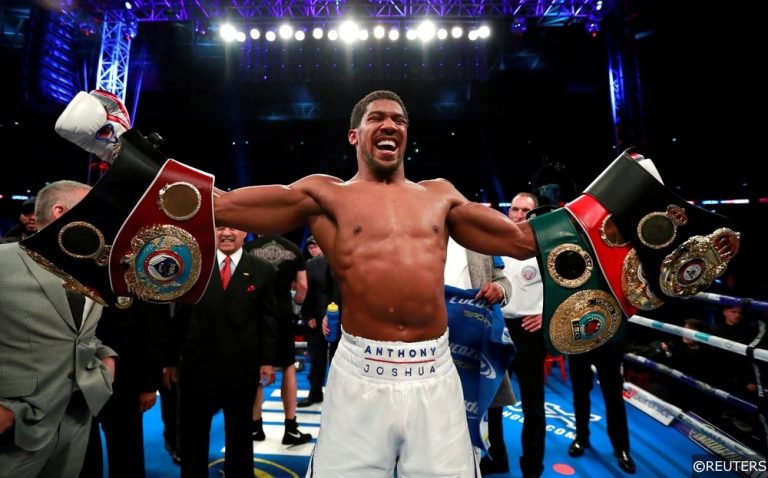 Anthony Joshua returns to the ring on Saturday night as he puts his WBA, WBO, IBF and IBO heavyweight titles on the line against former unified cruiserweight world champion Oleksandr Usyk.

This may not be the fight we wanted for Joshua as a showdown with British rival and WBC king Tyson Fury fell through. That surely will be resurrected in the not too distant future, but first Joshua must take on mandatory WBO challenger Usyk after an arbitration hearing ruled Fury has to face Deontay Wilder for a third time, with their trilogy fight due to take place in Las Vegas next month.

Anthony Joshua vs Oleksandr Usyk – Where to watch

The ring walks are due to begin at 10pm and the fight itself is likely to start at around 10.40pm on Saturday, although those times are subject to change depending on how long the undercard bouts last.

This is a fascinating match-up that may ultimately be a lot closer than the betting odds suggest. Joshua goes into the bout at 4/11, with Usyk on offer at 9/4.

As a natural heavyweight, Joshua has a clear size and power advantage and that will be a big factor. The defending champion will need to make the most of those advantages in order to take control of the contest in the earlier rounds. Usyk came through heavyweight contests with Chazz Witherspoon and Dereck Chisora prior to this fight, but Joshua is a big step up and there is a chance his power could simply be too much for the challenger to cope with.

However, Uysk is comfortably the most technically gifted fighter AJ will have faced in his career, including Wladimir Klitschko. The Ukrainian southpaw has phenomenal footwork and is a superb counterpuncher with a natural ability to set traps, he has also never really been in trouble in an 18-fight professional career, with the possible exception of his win over Mairis Briedis in his 14th fight.

There is a chance Joshua could simply blow Usyk away by landing a shot the former cruiserweight has never experienced before, but the same can be said of almost any heavyweight contest and at a big price I feel the unbeaten Usyk has a real chance here. He has come up against incredibly powerful opponents in the past – Murat Gassiev and Michael Hunter for example – and come through comfortably in the end. It is a huge ask, but if the elusive Usyk can avoid taking too many big shots he has the quality to win this battle – and with his underdog status and big price a wager on the challenger looks worth the risk.

Who’s on the undercard?

There are some excellent fighters on the Joshua vs Usyk undercard and I’ve put together a four-fold accumulator, including my selection for the heavyweight headliner too.

Callum Smith starts his road to redemption against Lenin Castillo after losing his super-middleweight world titles and unbeaten record to Saul ‘Canelo’ Alvarez. The Liverpudlian was simply outclassed by Canelo in 2019 but there is no disgrace in losing to a fighter widely regarded as the pound-for-pound king.

Smith is the heavy favourite as he steps up to light heavyweight against Lenin Castillo and I expect him to come away with the win but he may need the judges. I’m backing this fight to go the distance as neither fighter has ever been stopped.

Londoner Lawrence Okolie is also on the bill as he defends his WBO cruiserweight title against mandatory challenger Dilan Prasovic. Okolie is unbeaten after 16 professional fights and the 28-year-old boasts incredible power, having stopped 13 of his opponents and none of his last six fights have lasted longer than seven rounds. As such, my tip for this one is an Okolie win by KO, TKO or DQ.

Maxim Prodan defends his IBF International title against Florian Marku in what could be a cracking welterweight clash. Both fighters are unbeaten going into this match-up, although both have had one draw each in the past, and both have exceptional knockout records. Marku has six stoppages in his eight fights, while 15 of Prodan’s 19 wins have been inside the distance. However, as neither fighter has ever been stopped I feel there is a good chance this match-up goes the full distance, with 10 rounds scheduled on Saturday.

Finally, a win for Usyk completes the accumulator.

In The Mixer: Experts pick their Carabao Cup winners