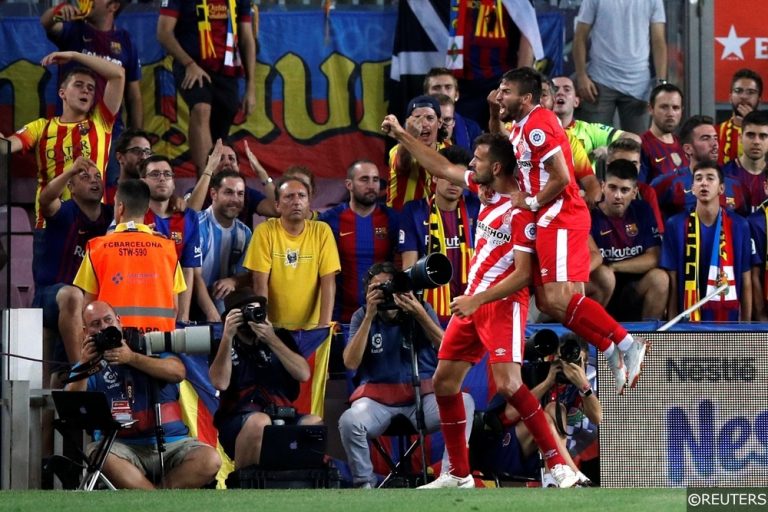 It has been a relatively quiet January so far for the clubs at the top end of La Liga. Barcelona have signed Jeison Murillo as a stopgap central defender while Real Madrid have snapped up Brahim Diaz from Manchester City. In truth neither deal is likely to have a big impact on the battle for honours this season.

There could be some more significant activity to come though and several of La Liga’s biggest clubs are believed to be in the market for a new number 9. Big mid-season deals are pretty rare and we are unlikely to see any crazy fees paid this month unlike this time last year when Barcelona spent big on Philippe Coutinho, who is struggling to get into the team twelve months on. However squad depth is key in the busy second half of the season and we will almost certainly see some significant activity involving strikers before the month is out.

One side that will almost certainly invest in a striker is Barcelona. A recurring theme in recent years has been their inability to keep fringe players happy with a forward-line that is virtually impossible to break into. Paco Alcacer left in the summer and has gone on to score for fun for Borussia Dortmund in Germany. Munir took on the role of playing second fiddle to Luis Suarez this season but he too has already grown frustrated with a lack of opportunities and departed for another loan, this time with Sevilla, only last week.

That leaves Barcelona with only one natural number nine. They experimented with Ousmane Dembele in the position in last week’s Copa del Rey game. He could get another run-out through the middle in the 2nd Leg against Levante this week, but in truth he is far more effective out wide. The Frenchman in any case is currently a first choice starter on the left flank so any injury to Luis Suarez in the latter part of the season could prove a decisive blow to their Champions League hopes.

While ideally they would like to find a long-term successor to Suarez, who turns 32 this month, a short-term option is more likely this month. Olivier Giroud has emerged as one surprise candidate. Meanwhile closer to home, a move for Girona’s Cristhian Stuani, the highest scoring non-Barcelona player in La Liga this term, seems more plausible. The former Middlesbrough man would almost certainly be happy to make the move, even in a back-up capacity with an opportunity to play for such a huge club unlikely to come around again given he is even older than his compatriot.

The battle for Maxi Gomez

There is also a third Uruguayan flying high in La Liga’s scoring charts. That is Celta Vigo’s Maxi Gomez. He is another to have been linked with Barcelona but he appears a more natural fit for Atletico Madrid, who haven’t really had an effective number nine for a number of years now. Diego Costa has suddenly started to look like a player past his peak while Nikola Kalinić has failed to prove an effective deputy with the former Chelsea man currently injured. Both players have recently turned 30 and at 22, Maxi Gomez is already perfectly suited to Atleti’s style and has netted an impressive 26 goals from 50 starts since making his La Liga debut in August 2017.

With Celta currently hovering just above the drop-zone, it’s hard to see Gomez remaining in Galicia for much longer. The battle for his signature could be fierce given the lack of young strikers who can match those kind of figures in any of Europe’s big leagues. Premier League interest is also likely with West Ham rumoured to be lining him up as a replacement for Marko Arnautović, who is one of a number of players who could be on the move this January transfer window.

Gomez would be a terrific signing for the Hammers but they will have to play it carefully as any bid could force the likes of Atleti or Barcelona into action. Both clubs would most likely rather wait until the summer rather than get into a January bidding war with a Premier League club. The ball may though ultimately lie in the hands of the player, who with his stock continuing to rise, has plenty of time to weigh up his options before making a big money move.

A relative dearth of Spanish striking talent is clear right now and is perhaps best summed up by the presence of more Uruguayans than Spaniards in the current top eight of La Liga’s striking charts.

Perhaps the most high profile Spanish striker is Alvaro Morata. Widespread reports in Spain suggest he has been offered to all of La Liga’s top four this month with Chelsea seemingly desperate to offload the 26 year old. So far at least, no side has taken them up on their offer and it’s curious how the career of one of the country’s biggest young talents is yet to really take off as many might have expected.

There is a case to be made for why Morata would add something to any of La Liga’s top four. He’d certainly be a useful player for Barcelona to have as a back-up to Suarez and his game big stage experience would make him an upgrade on recent fringe players, who would perhaps not have been trusted with leading the line in a big Champions League game for example. Diego Simeone is known to be a long-time admirer of Morata but having unsuccessfully replaced Diego Costa at Stamford Bridge, a subsequent move to join Costa at Atleti would be a curious one.

Atleti are the team that have been most strongly linked with a bid but ironically the team that perhaps needs him most is Real Madrid. Their highest scorer in La Liga this season is Raul De Tomas, a striker on loan at Rayo Vallecano who they can’t recall this month. The only league title Los Blancos have won in the last six seasons probably wouldn’t have been clinched were it not for the 15 goals scored by Alvaro Morata in 2016/17. Frustrated at still being treated as a fringe player, he left the club that summer and while starting opportunities would be much more forthcoming now, there’s a feeling that too many bridges have been burned for Morata ever to go back to the Bernabeu.