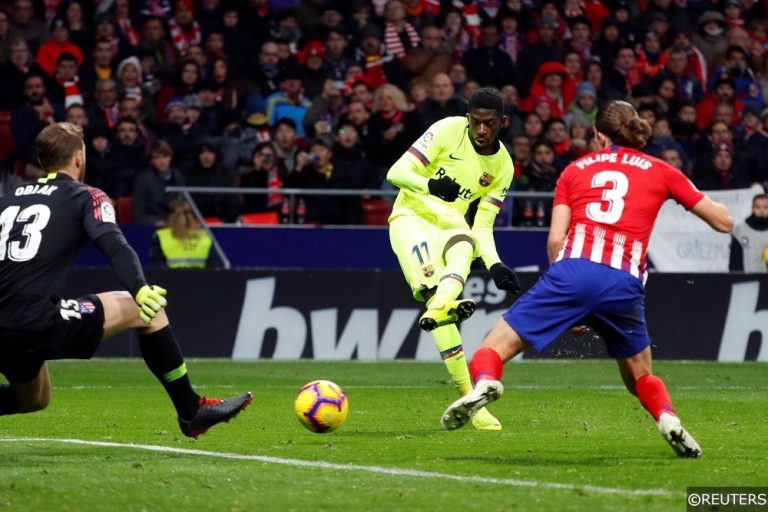 Another significant weekend in La Liga started with anticipation at the prospect of a top of the table clash between Atletico Madrid and Barcelona. If any weekend was going to see Real Madrid finally out of the headlines it was surely this one but once again their latest moment of crisis ended up overshadowing what was for 75 minutes at least an utterly uneventful game at the Wanda Metropolitano.

Real’s capitulation away to Basque minnows Eibar throws fresh doubt on their hopes of landing any silverware this season and for the first time they are now 3rd favourites to win La Liga behind their two great rivals. However it was none of the so-called ‘big three’ who ended the weekend in top spot and even surprise package Alaves spurned their chance to go 1st on Friday night with defeat at Leganes. Instead Sevilla lead the pack again after an unconvincing 1-0 win over Real Valladolid in which keeper Tomas Vaclík produced some fine saves to deny the newly promoted side.

Eibar’s tale is an extraordinary one. With a population of just 27,000 people, you could put everyone from Eibar in the Bernabeu and it would only be a third full. However they are now almost part of the furniture in La Liga and have improved on their previous finishing position in each of their four top flight seasons since making their debut in the Primera Division in 2014. Despite continuing to punch way above their weight, the one thing they hadn’t done since joining the top flight was beat one of the ‘big three’ clubs but on Saturday they finally had a victory to savour in their 26th outing against either Barcelona or the Madrid giants.

A masterclass from José Luis Mendilibar saw his side boss proceedings throughout against the European champions in their first game with Santi Solari as permanent boss. In a season of lows, it was Real Madrid’s worst performance and worse result. Fans of Los Blancos would have been forgiven for thinking that it would be impossible to sink lower than the dark final weeks under Julen Lopetegui but somehow they managed it at Ipurua. Besides the absence of Casemiro, this was a Real Madrid with all of their regulars to choose from but the result will leave Solari with some serious thinking to do ahead of this Tuesday’s Champions League trip to Roma.

In truth, 3-0 almost flattered Real Madrid by the end. Early Second Half strikes from Sergi Enrich and Kike effectively killed off the game and Los Blancos needed Thibaut Courtois to prevent the Basque minnows making it four or five. On this evidence Real Madrid will do well to make the top four, never mind win the title.

The Atletico boss could be without the Spanish striker for the Champions League game at home to Monaco Diego Costa suffered a foot injury after scoring his first La Liga goal of the season against Barcelona, says Diego Simeone.
Costa pic.twitter.com/HE99mX50XQ

The early result from Ipurua would have been a huge boost to both Atletico Madrid and Barcelona heading into their big showdown at the Wanda Metropolitano. The result meant the winners of the evening game would seize the advantage in the title race but to say the game failed to live up to the pre-game hype and atmosphere would be more than an understatement.

For 76 minutes almost nothing happened. There were no goals and not even a shot on target in the cagiest of football matches. You’ve almost come to expect caution from Atletico Madrid but despite having never beaten Barcelona in La Liga, Diego Simeone resisted the urge to divert from the usual playbook, despite now possessing a side that is operating on a far more level playing field to the Catalan giants in terms of finances and quality. Ernesto Valverde was no more adventurous as Barcelona switched back to a 4-4-2 following a 4-3 defeat to Betis, matching Atleti man for man with stalemate the result.

Never had a game looked more certain to finish 0-0 but then out of nothing Atleti made their breakthrough, scoring with what was the match’s first attempt on target. The scorer was none other than Diego Costa, heading home at the far post from close-range to score his first league goal in nine months and first ever against Barcelona. Marc-André ter Stegen may feel he could have kept it out, a fortnight on from a howler against Betis and it left Atletico Madrid with 13 minutes to see out against a Barcelona side who had scarcely threatened until that point.

7 – No other player has won more points with his goals than Ousmane Dembélé in La Liga this season (seven points with five goals). Rescuer. pic.twitter.com/36QgTjg6IF

Heading into the game, the two players who were arguably under the most pressure were Diego Costa, due to his long goal drought and Ousmane Dembele, subject of plenty of criticism in recent weeks. Much of that has surrounded his off-field activities and a perceived lack of professionalism but his lack of an impact on the pitch has also been highlighted.

Dembele was left out altogether against Betis following another missed training session but returned to the bench here. Costa’s strike left Valverde little option but to throw caution to the wind and he responded by throwing on both Dembele and Malcom for a late onslaught on the Atleti goal. With four up top, Barcelona suddenly were causing problems and on the stroke of 90 minutes, Messi found Dembele in space and the Frenchman had the chance to rescue a point for his side. Twelve months ago he might have snatched at the chance but Dembele showed the coolness and composure to take a touch before firing past Jan Oblak to level the scores and ensure the match would end in the draw it always seemed destined to be.

For all the criticism, Dembele is now developing a real knack for making key contributions and despite limited starting opportunities, arguably only Leo Messi has produced more game-changing moments for Barca this term. The Frenchman has scored 7 goals in all competitions now this season and 5 of them have been vital ones. The best of the bunch was his spectacular winner in the Spanish Super Cup but he has since popped up to score four key 2nd Half goals on the road in La Liga. Dembele netted the winner in narrow wins at Valladolid and Sociedad earlier in the campaign and has helped his side snatch 4 points from losing situations in recent weeks. His 87th minute leveller at Rayo was another cool finish and proved the platform for a dramatic late comeback win and his goal at the Wanda on Saturday was the most important yet against what is now arguably Barca’s most likely title rival.