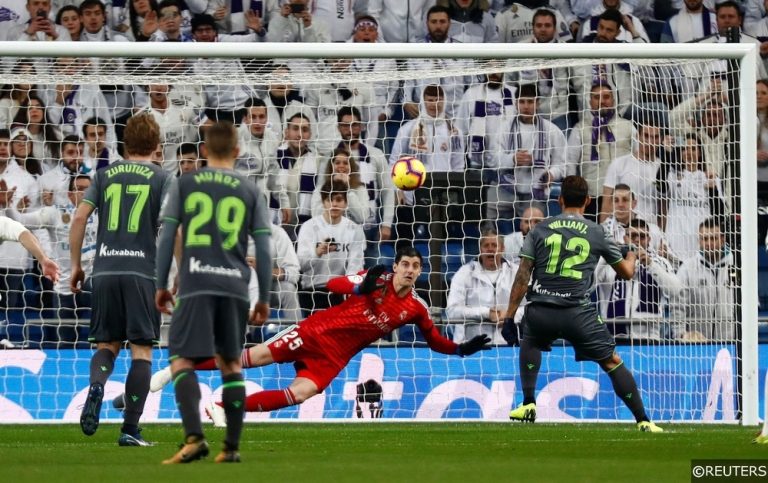 We may be less than a week into 2019 but Sunday felt like a very significant day in the race for the title in La Liga. In the weeks leading up to the break, Barcelona found an extra gear and put in some displays that none of the other potential title contenders were able to match. However with the Madrid clubs finding a way to win without playing well, the Catalans failed to truly open up a clear advantage at the top of the Spanish Primera Division.

However the first Sunday of 2019, with all the top four in action, couldn’t have gone any better for Ernesto Valverde’s Barcelona who now have a 5 point lead at the top of La Liga, the largest it has been all season. Significantly they are 10 points clear of Real Madrid on equal games played following a dreadful start to the new year for Los Blancos.

Here were the main stories at the top of La Liga this weekend:

No Isco, No Goals & No Points for Real

Real defeated at home and could find themselves 10 points off top spot later today. pic.twitter.com/7s31Gf1Xbm

Real Madrid headed into 2019 with a real chance to close the gap to Barcelona. A trip to struggling Villarreal was their game in hand on Thursday followed by a home game against a badly out of form Real Sociedad. Santi Solari would have envisaged ending the weekend at the very least back to 5 points behind Barca but instead his side are a distant 10 points off the pace and Solari has plenty of questions to answer with the pressure growing on a man who was only appointed on a permanent basis in November.

While results have been reasonable until this past week, a fallout with Isco has dominated media talk in Spain. The extent of the breakdown of their relationship was highlighted this Sunday. With Real Madrid missing both Gareth Bale and Marco Asensio to injury, Solari still left Isco on the bench with Lucas Vazquez and Vinícius Júnior preferred in the wide roles either side of a misfiring Karim Benzema. While he was introduced after the break, his exclusion will certainly have come to the attention of several European giants who have been linked with a move for the talented Spaniard this month. However in truth the result may only serve to tempt Isco to bide his time and wait for another managerial change at the Bernabeu.

Sociedad were ahead after just 3 minutes with Willian Jose converting from the penalty spot. The Basques, in their first game back under the stewardship of Imanol Alguacil, sat deep for much of the game but remained a threat on the break, spurning chances to extend their advantage. However when Lucas Vazquez saw red for a second bookable offence on the hour mark, they sensed a famous win was within their grasp and a four game losing streak in La Liga was ended when Ruben Pardo headed in with just 7 minutes to play.

Real Madrid had their chances, even with 10 men, but were wasteful in front of goal and with their next two games against top six sides in the form of Betis and Sevilla, they risk disappearing from this title race before it has even truly begun. Even their usual resurgence when the Champions League swings back into gear seems unlikely this year and the coming weeks are likely to be dominated by talk of what the future holds for Solari, Isco and perhaps even the now available Jose Mourinho, who has long been linked with a return to the Spanish capital.

Spoils Shared between Sevilla and Atleti

Barcelona’s weekend had already got off to a good start even before Real Madrid suffered their 6th league defeat of the campaign. Sevilla and Atletico Madrid went into their meeting at the Ramon Sanchez Pizjuan as the two sides directly below Barca at the top of La Liga but neither could strike a significant blow as the points were shared in the Andalusian capital.

Sevilla struck first with Wissam Ben Yedder converting from close range to the delight of a passionate home crowd. Gunning for an 11th straight home win in all competitions, Sevilla had a real platform to go on and complete a home league double over the Madrid clubs but Antoine Griezmann had other ideas. The Frenchman scored brilliantly from a free-kick on the stroke of Half-Time but missed an excellent chance to seal a significant win in the 2nd Half with the impressive Tomas Vaclik again performing well in goal for Sevilla.

It was a point that suited Barcelona more than either of these sides. Sevilla missed a chance to make a real statement of intent and look perhaps a shade short still of being genuine title-challenging material. For Atletico Madrid meanwhile, it was a 6th away league draw of the season. There have been more damaging ones than this one and they remain in 2nd place only 5 points off Valverde’s side but Barcelona have taken 8 more points than Atleti away from home this term. Unless Diego Simeone can quickly find a winning formula on the road, their best shot at a title since they won La Liga in 2014 could slip away from them.

Barcelona made their rivals pay for their earlier slip-ups by emerging from a tricky game at Getafe with all the points. Despite having an early goal ruled out, Getafe were in danger of being blown away in the first period as Barcelona put in another assured display on the road. Leo Messi took just 20 minutes to open his goalscoring tally for the new year but his strike was bettered by a thunderous drive from Luis Suarez on 39 minutes as the Catalans took a firm grip on the game.

However Getafe to their credit fought back well. Jaime Mata halved the deficit just four minutes later and they competed admirably after the break, at times threatening to level the game. The Second Half typified the Barcelona of last season, not playing brilliantly but still finding a way to get the job done. It’s a trait that none of their rivals have managed to emulate away from home and while there is plenty of football still to be played, it’s looking increasingly hard to see how anyone is going to stop Barcelona this season in La Liga.