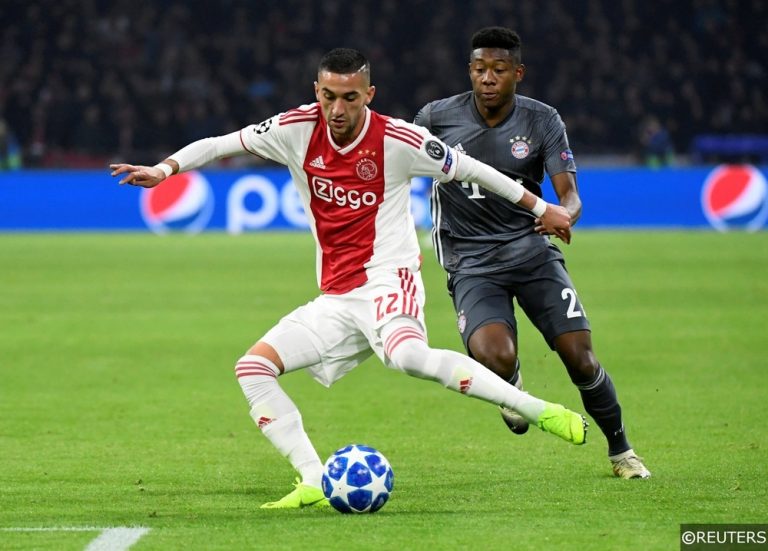 In February this year, just weeks after the winter transfer window closed, Chelsea formally announced that they had reached an agreement with Ajax for their Moroccan star Hakim Ziyech.

The 27-year-old, who will officially join the Blues on July 1st, will cost the Premier League side upwards of €40m depending on the success he enjoys at Stamford Bridge, though Ziyech’s record suggests all of the deal’s performance related clauses and payments will be triggered.

With the club’s transfer ban scuppering market moves in the summer, Ziyech became the first signing of the Frank Lampard era at Chelsea, a full seven months after the former Blues midfielder took the reins.

Ziyech then, will become a significant member of Lampard’s squad in more ways than one in July, and the wide attacker revealed the major part his new manager played in persuading him to move to West London.

Speaking to Voetbal International, Ziyech said: ” Chelsea is a very big and nice club. They have a coach who loves attacking and attractive football in Frank Lampard.

“I feel the same way. We had some good talks. Lampard is really calm and presented himself well. We immediately felt a connection, which also convinced me to make this decision.”

After he crossed the Eredivisie to join Ajax from Heerenveen in 2016 for approximately €11m, Ziyech became one of the figureheads of a young, exciting de Godenzonen side.

The Moroccan international quickly became a firm favourite in Amsterdam, though the star shone particularly brightly during the club’s hugely successful 2018/19 campaign.

Ajax completed a domestic Eredivisie and KNVB Beker double and were seconds away from reaching the Champions League final before they were cruelly denied, losing on away goals to Tottenham.

Ziyech was a key performer during Ajax’s sparkling season, delivering 21 goals and 16 assists from the right-flank for the Dutch giants, while drawing praise for his performances on the biggest stage against Real Madrid and Juventus in the latter stages of Europe’s elite club competition.

The wideman only registered six times for Ajax in the Eredivisie this season before the division’s postponement and eventual cancellation, however, his powers of creation remained just as potent.

Ziyech added 12 assists to his league tally for Ajax, which was second only behind teammate Dusan Tadic’s 14 this term in Dutch football.

What can Ziyech bring to Chelsea?

With out of contract duo Pedro and Williams looking certain to leave Chelsea this summer, Ziyech’s arrival should help to fill the experience void in the Blues’ attacking midfield armoury alongside the youthful Mason Mount, Callum Hudson-Odoi and Christian Pulisic.

While that aforementioned triple act of developing schemers have potential to burn, they are best deployed in central areas and from the left, leaving ample room for Ziyech to claim his favoured right-sided berth.

In fact, a glance at some of Chelsea’s attacking statistics from the 2019/20 Premier League season show that there is a creativity gap that needs filling down that side of the pitch.

Remarkably, just 35% of the Blues’ attacking moves came down their right flank during the 29 Premier League fixtures they contested until March this year- a figure that places them behind 13 of the division’s other clubs in terms of threat from that side.

Similarly, Chelsea’s attempts output from the area of the pitch Ziyech will occupy, was considerably lower than other areas of the pitch between August and March in the Premier League.

63% of the Blues’ shots on goal came from central areas during that period, while 22% of their attempts were struck from the left. Just 15% of their Premier League shots were produced from that increasingly toothless looking zone on the right.

When you consider that the consistently creative Ziyech ranks top of the pile for average shots (4.2) and key passes played per game (3.7) in the Eredivisie term, it’s easy to see why Chelsea and Lampard were so desperate to land their man.

Premier League update: What is “Project Restart?”
10 youth prospects ready for Premier League action
How much will Manchester City miss David Silva?
Aubameyang’s Emirates exit edges closer – but where will the Gabon striker end up?