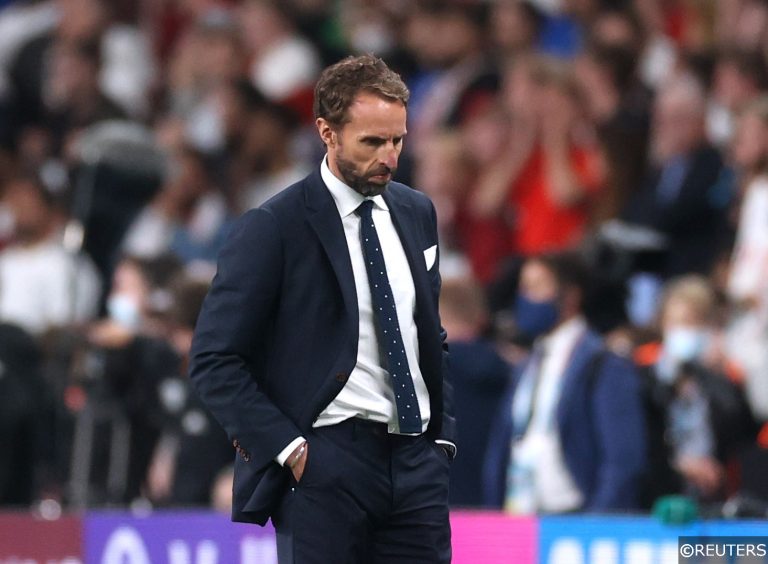 A year ago Gareth Southgate was cruising as England boss, having guided the Three Lions to the final of Euro 2020. Less than two months from their first game in Qatar, his future is up for debate.

There’s nothing to suggest that Southgate won’t be in charge for that game. However, the man himself has admitted that his future is on the line this winter.

There’s little doubt that England are having a terrible 2022, but if they were to replace Southgate are their viable alternatives to take over?

*Odds correct as of 12pm & sourced via SkyBet

The two favourites for the job are obvious, with Graham Potter and Eddie Howe the highest-rated English bosses in the Premier League. However, would they be willing to depart their jobs for England?

Graham Potter has had one game in charge of Chelsea, while Howe is at the start of a long-term project designed to get Newcastle into the Champions League. While both would likely want to take charge of their national side during their careers, they’re unlikely to get another club opportunity like the one they’re in now. Given that, it’s hard to see them as real candidates.

I’m strongly against the idea of drafting in a foreign manager in international football – certainly not by England. With billions being invested in the English game, the deepest professional pyramid in world football should be able to produce a homegrown manager. Smaller nations with fewer resources may sometimes require a foreign boss, but it would be an embarrassment for the FA to go down that route again.

They may make an exception for a UK coach who is part of the English system, like 6/1 Cooper or 16/1 option Brendan Rodgers. However, the pair are currently in charge of the Premier League’s bottom two. They’d need to pick up by November to be considered contenders.

Of the two, Cooper looks most likely given his successful stint as boss of England’s under-17s. He won the World Cup with that side, which featured Jadon Sancho, Phil Foden, Marc Guehi and Emile Smith-Rowe.

However, our Premier League sack race article points towards issues for Cooper in the near future which could rule him out too.

Who are the other contenders?

With the top six contenders ruled out, we’re starting to move down the list trying to find another option. There are six English managers priced at 25/1 or shorter; Lee Carsley, Steven Gerrard, Frank Lampard, Wayne Rooney, Scott Parker and Sean Dyche.

Carsley would be a reboot from the FA, turning to the under-21s coach just as they did with Southgate was their only candidate in 2016. Parker and Dyche have been sacked by relegation-threatened sides this year, leaving three members of the golden generation.

Gerrard and Lampard found success with Rangers and Chelsea respectively, but they’re struggling with midtable Premier League sides. Both would likely see this move as too soon in their career, as they’re fighting to establish themselves in their current jobs.

Wayne Rooney would have been shorter than 20/1 if he hadn’t recently moved to MLS. He impressed at Derby and the FA showed they don’t require much experience when they appointed Southgate. While he has moved to the US to build his career, I would be surprised to see his odds tumble if Southgate went. He’s probably the best value of anyone in the market.

Is there an upgrade on Southgate?

Southgate’s CV boasts a World Cup semi-final, a Euros final and a Nations League semi-final. He is getting heat for struggling in a bizarre international calendar against three good to excellent sides. Given that he took charge off the back of Euro 2016 humiliation and pint-of-wine-gate, I’d say he’s doing quite well.

If there was another boss out there with Southgate’s record, fans would be clamouring to get him in. While the football his side are playing isn’t great, it’s hard to change that in limited international training camps. Of the available English options, none are associated with any real flair.

If the FA wanted more tactical nous and a different style of play then arguably the best English option is Chris Wilder. He’s a 33/1 shot and it won’t happen for a variety of reasons – including the fact that appointing a Championship boss as England manager is too Mike Bassett-like.

However, Wilder has managed almost 1000 games, graduating through the EFL and into the Premier League. He and assistant coach Alan Knill played a forward-thinking 3-5-2 at Sheffield United and even his slow start at Middlesbrough this term hasn’t prevented interest from Premier League Bournemouth.

However, when the best possible replacement boss is currently 22nd in the second-tier, all signs point towards keeping Southgate.