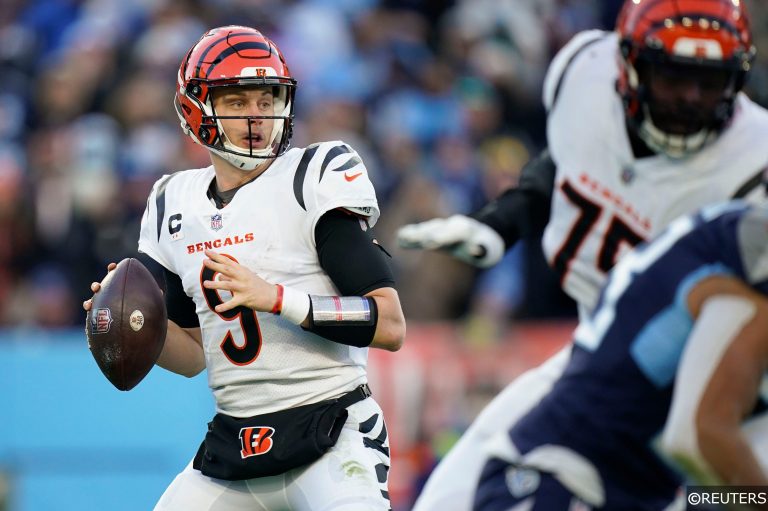 Being an NFL fan in the UK takes dedication. It involves a lot of late Sunday nights, meaning the working week often gets off to a rough start. Throw kids into the mix and it can be a recipe for disaster.

Going to bed early is not an option for the die-hards, but it is for the casual fan who wants to enjoy the pomp and pageantry of the Super Bowl without the consequences. They don’t even need to stay up until the small hours to see any of their bets cash if they play it smart.

For those of you who just can’t resist the lure of bed but want to have a flutter on Sunday’s Super Bowl between the Cincinnati Bengals and Los Angeles Rams, here are a few options.

Guyton to make the most of Super Bowl spotlight

You can bet on just about anything to do with the Super Bowl, from the result of the coin toss to the colour of the energy drink the winning coach is showered with at the end of the game. One of the more popular novelty bets is how long the national anthem lasts before kick-off.

This year, country music artist Mickey Guyton will perform ‘The Star-Spangled Banner’ and is priced up as if she’s going to buck the trend of long renditions which has seen seven of the last nine national anthems lasting longer than two minutes. There is footage of Guyton taking 85 seconds to perform the anthem at an event last year but renditions can be a little longer when on the Super Bowl stage. Jazmine Sullivan and Eric Church took 137 seconds to sing the anthem last year, despite having performed it significantly quicker in the past.

Kickers can’t put the boot in

Opening kick off not to be a touchback – 4/5

To the action itself and the outcome of the opening kick off (yes you can bet on that too). The team starting the game will often try to kick the ball out of the back of the endzone, known as a touchback, to deny their opponents the chance to run it out. The Bengals and Rams have two strong kickers, regularly clearing the end of the field and ranking 9th and 13th in kickoff touchback percentage.

However, unlike a regular season game where kickers get to break the ball in ahead of the match, the NFL insists no one touches the ball used for kick off. Former NFL kicker turned media personality Pat McAfee says the ball used for a Super Bowl kick off, as a consequence of it not being broken in, is one of the worst a kicker can encounter and the results speak for themselves. Seven of the last eight Super Bowls have started with a kick off return and that’s a trend that is tough to ignore.

Steer away from early TDs

A field goal to be the first scoring play – 6/4

Touchdowns are what keep you awake on those long Sunday nights but you often need to be patient as the teams get a read on one another. That trend continues at the Super Bowl, resulting in the opening scoring play of the last four title deciders being a field goal.

A field goal has also put the first points on the board in six of the last nine Super Bowls too and looks a strong choice again given the teams on show. The Bengals have an excellent kicker on their roster in Evan McPhearson and the rookie is yet to miss in the playoffs. He’s kicked the opening points in two of the Bengals’ last three games, while Rams kicker Matt Gay has broken the deadlock in two of their previous four outings.

Beckham can spice up Super Bowl

Odell Beckham Jr is one of the NFL’s more colourful characters, known for his outrageous hairstyles as much as his spectacular catches. Opinion on had swung towards him being more a show pony than top class wide receiver in recent years but since leaving the Cleveland Browns mid-season, Beckham Jr has slowly rebuilt his reputation with the Rams.

He heads into the Super Bowl off the back of his best showing as a Ram, catching nine passes for over 100 yards in the NFC Championship win over the San Francisco 49ers. He’s established himself as a vital part of the Rams offence, catching six touchdown passes in his 10 outings for Los Angeles and is a big price to grab the game’s first TD. The Bengals are slow starters so don’t appeal, while the Rams’ top receiver Cooper Kupp is likely to receive a lot of attention from the Cincinnati defence, leaving Beckham Jr with room to work.