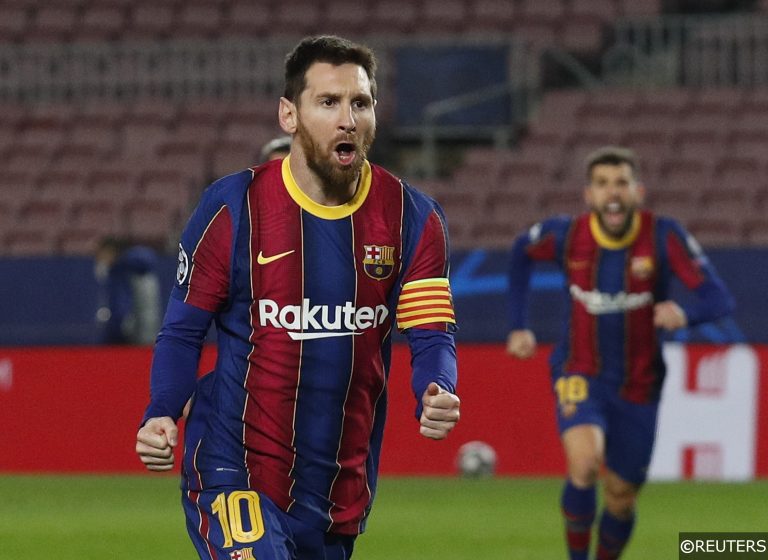 On Wednesday, four of European football’s biggest names will meet to contest the crucial second legs of their Champions League Last 16 ties, and below, we’ve got huge 33/1 and 20/1 #OddsOnThat selections built around each exciting tussle.

In Budapest, Jurgen Klopp leads Liverpool into battle against an opponent from his homeland, RB Leipzig, where the Reds hold what looks a comfortable two-goal advantage.

A little further west in France, PSG take a 4-1 first-leg lead into their rematch with a Barcelona team that will to conjure a sporting miracle to overturn the deficit in Paris.

Check out our #OOT selections for each of Wednesday’s mammoth knockout contests below and remember – we’ll be covering all of the games in detail on our Champions League predictions page.

RB Leipzig will have to go for the jugular from the first whistle if they are to claw back the two-goal difference between the teams, and that should in turn open up numerous spaces for Liverpool to counter-attack in to. Die Roten Bullen’s Champions League matches are averaging 3.57 goals per 90 minutes this season, and we see Wednesday’s clash following that pattern.

RB Leipzig have kept just one clean sheet in seven Champions League assignments this season, while Liverpool have shut-out their opponents just twice in their last 12 fixtures in all competitions. Both teams are much better going forward than they are in defensive areas, so expect goals to be plundered at either end in Budapest.

RB Leipzig have collected more cards than any other remaining side in the Champions League, while the aggressive German outfit also top the pile for most fouls conceded per game in the tournament. The first-leg between Die Roten Bullen and Liverpool produced a bone-crunching seven yellow cards, and the return fixture promises to be just as combative.

One of Liverpool’s goal-scoring heroes from the first-leg, Mohamed Salah, has been averaging 2.9 attempts on goal in his combined Premier and Champions League appearances for Liverpool this term, and the Egyptian has been hitting the target with almost half of his efforts. Expect the winger to be central to the Reds’ forward play again this week.

Versatile RB Leipzig defender Nodi Mukiele didn’t have the best of evenings in the first leg against Liverpool, when the French youngster was booked and made a mistake leading one of the Reds’ goals. The 23-year-old has been cautioned six times in total this season, and having struggled against Liverpool’s pace up top last month, Mukiele looks a prime candidate to tackle his way into trouble again on Wednesday.

PSG tore Barcelona to shreds in a dominant first-leg showing in Catalonia last month, and that same devastating counter-attacking ability they displayed at Camp Nou could allow them to pick Barca off again in France.

French sensation Kylian Mbappe rifled home a superb hattrick at Camp Nou in PSG’s 4-1 first-leg triumph, and the starlet’s combination of skill, speed and technique should prove tough for the same defence to combat in the return fixture.

Barcelona stalwart Sergio Busquets has already been cautioned seven times this season, and Barca will need their anchorman to wield his full mastery of the dark arts to fend of PSG’s counter-punching frontline. Busquets will have a lot of play to break up in Paris on Wednesday, and he could draw attention from the officials as a result.

Kylian Mbappe and Lionel Messi 2+ shots on target each

Kylian Mbappe mustered four shots on target at the Camp Nou last month, and with open grass to exploit against a Barca team pushing for parity, he can match his output in the second-leg. Lionel Messi meanwhile, is averaging more attempts on target (3.4) per game than any player left in this season’s Champions League. Barcelona will be looking to their talisman for inspiration in Paris, so expect the Argentinean to let fly at every opportunity.

You can combine both of our Champions League #OOT selections into one massive 714/1 double using the banner below.