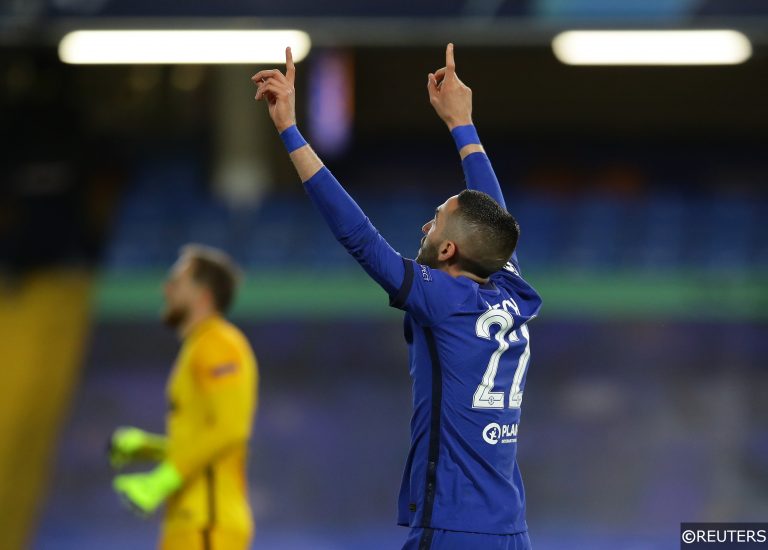 The Premier League heads down to the final day, with the Champions League and Europa League spots still to be decided. However, there’s usually plenty of interest across the league, as players and managers say their goodbyes.

On top of that, there’s the return of fans to stadiums to enjoy and we’re hoping to get another final day thriller between two sides who are on the beach.

Ahead of the big finale, we’ve taken a look at the key statistics from the 2020/21 campaign and we’ve looked back at the final round of previous seasons to see what we can expect.

Plus, if you like statistics we have covered plenty in our 26/1 stat attack accumulator.

Race for fourth (and third?)

The big interest on Sunday is the battle between Chelsea, Liverpool and Leicester. Those three fight for the two remaining Champions League spots, with a win for the Blues and Reds taking them into Europe’s top competition, leaving the Foxes out in the cold again.

Leicester have suffered final day heartbreak as recently as last season, but how do the trio perform in the final fixture? Unfortunately, only two current Premier League sides have a worse record than Leicester in the closing clash.

Not only are the trio fighting for the Champions League, there’s an interesting quirk which makes a third-place finish desirable. Both Chelsea and Liverpool will expect to be contenders to Man City’s throne in 2021/22, but top-flight clubs rarely win the title without pushing close in the previous season.

As you can see in the graphic below, Premier League title winners nearly always finish in the top three in the prior campaign. Two teams – Leicester and Chelsea – managed it having finished lower. However, they had the benefit of not playing European football and focused solely on surprise title triumphs. Sunday could give us a glimpse at who City’s most likely challengers are next season. 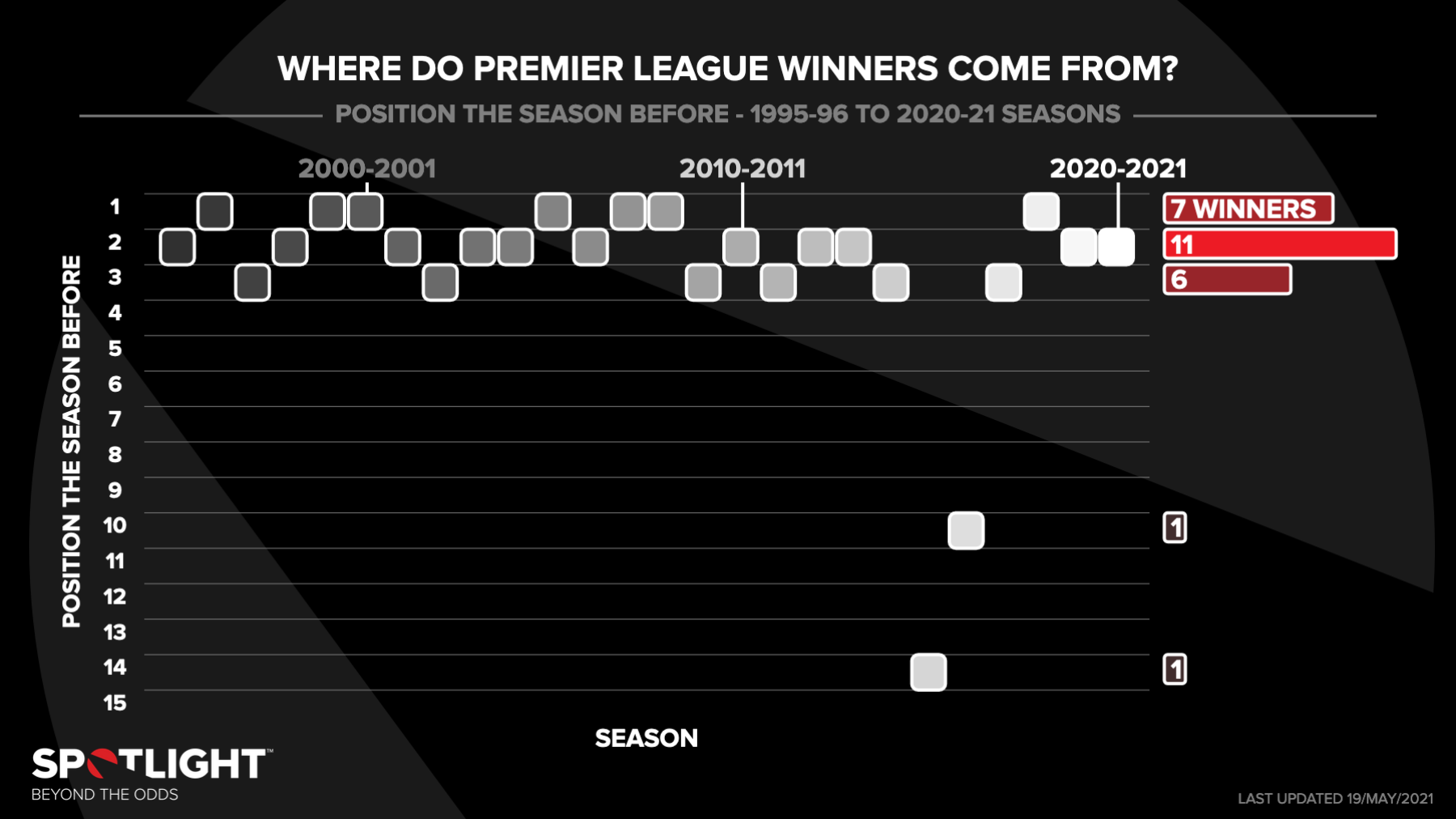 Leicester are one of the sides who have historically struggled on the final day, while their top four rivals have strong records. Chelsea and Liverpool have averaged 2 and 1.9 points per final day game respectively. Only Arsenal and Man United (2.3 points per game) boast a better return.

The Gunners’ European hopes look good if they can maintain that record, but they’re up against a West Ham side who have a surprisingly good record in their final match of the campaign. Below you can see the final day record for every current top-flight side, which points to a disappointing finish for Sheffield United and West Brom. 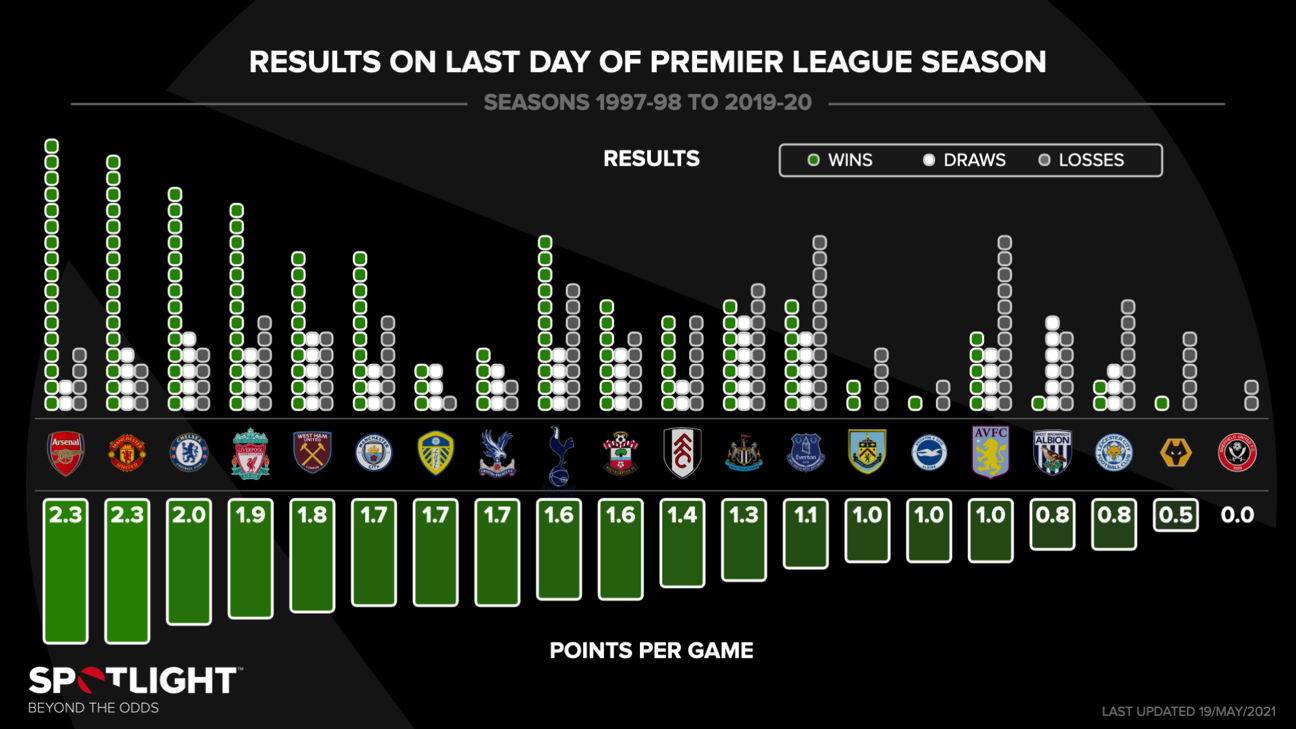 Searching for a final day thriller

Nine of the last 10 final rounds of the Premier League have had a game with five or more goals. Teams who have nothing to play for and players who are already dreaming of their summer break can lead to some thrillers.

Meanwhile, five of the last eight seasons have finished with a game which has seen at least seven goals scored. With only the European spots up for grabs this term, we could get another final day thriller.

However, it’s not only one wide open game to look forward to on the final day. Since 1998 57% of final day games have seen over 2.5 goals, compared to 50% of the opening 37. Last season, seven of the 10 games featured at least three goals. While there isn’t a huge amount on the line, Sunday should prove to be a good day for both teams to score bettors.

50/1 Acca among five winners on Friday