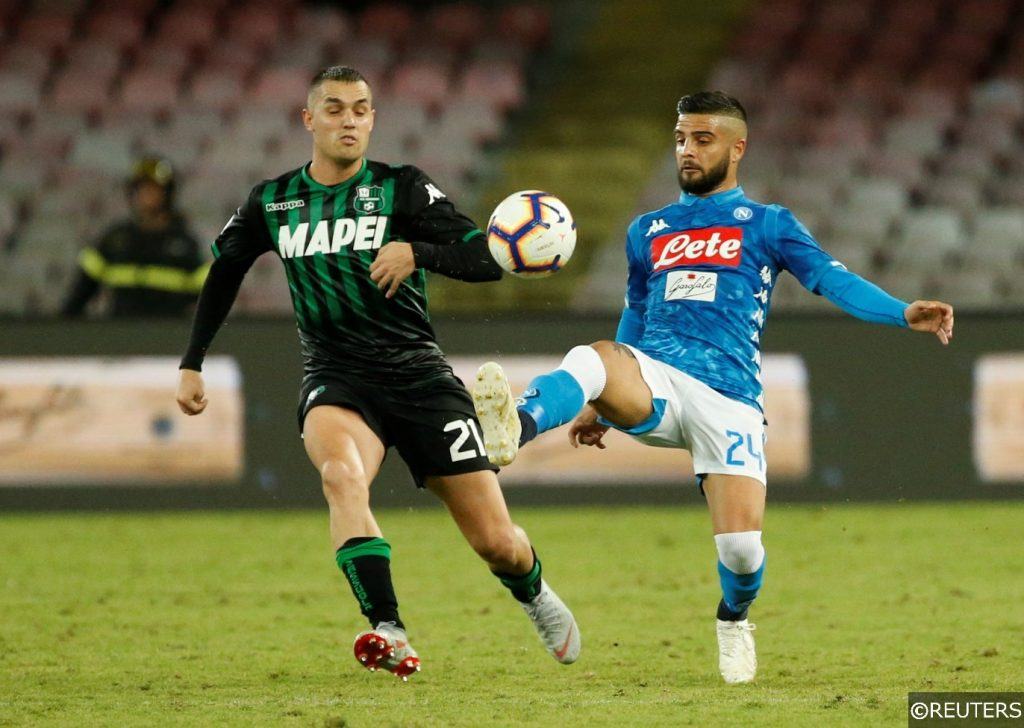 It’s been a busy week in Italy with a bonus midweek round of Serie A action. That’s led to a condensed weekend on the eve of more Champions League clashes next week. The fixtures are coming thick and fast for top clubs, which means more games for us to enjoy.

This weekend brings five live matches from Serie A on Sunday alone. There’s a 10-hour block of Italian action to round off the weekend, with some of the giants of the game in action. Ahead of those games, we’re analysing the biggest talking point from each encounter. We’re also supplying a prediction for each live Serie A game on Sunday.

Our football on TV guide has the lowdown on all the latest live games.

Sunday’s action kicks off in Naples, with Napoli under pressure to return to form. Their midweek 1-0 loss at home to Cagliari was a setback in their Scudetto bid, but we are backing them to return to form in our Napoli vs Brescia predictions. However, the hosts do have to be wary about the visitors’ scoring form, especially with the return of Mario Balotelli.

The former Man City striker has returned to Serie A, and to his hometown club. A suspension left him waiting to make his debut, but he was a man on a mission in his first start against Juventus in midweek. We expect him to take a similar approach when it comes to this clash, so he could well land his first Brescia goal on Sunday. The visitors have been creating plenty of chances this season, so we’re backing Balotelli to get among the goals. You can back him to score anytime at 10/3 with BetVictor by clicking below.

Inzaghi on the Way Out?

Lazio are going through their worst start to a season under Simone Inzaghi. The Coppa Italia-winning boss is having a tough time taking Lazio into the top four, while three defeats in four games has the rumour mill in full swing. A poor result against Genoa could spell the end, despite his contract renewal back in June. The bad news for Inzaghi is that Genoa travel here with a strong record of scoring at the top sides, which we’ve backed to continue in our Lazio vs Genoa predictions.

Genoa have scored twice in five of their six meetings with Lazio, which has helped them win two of the last three meetings. They’ll be aiming to pull off a result in this clash, having already secured a 3-3 draw at this ground against Roma earlier this season. With Lazio failing to win four of their last five, we are backing Genoa on the Double Chance market at 9/5 with BetVictor.

Could Dzeko Return to Form?

Roma suffered a setback in midweek, as they were beaten 2-0 at home by Champions League rivals Atalanta. The Giallorossi need a speedy return to form, while they should see off Lecce this weekend. We’ve backed the visitors to edge a high-scoring encounter in our Lecce vs Roma predictions. However, will Edin Dzeko be among the goals?

This season has been great for Dzeko so far, with the forward following up three preseason goals with a strong start. He has found the net in eight of their last 10 games in all competitions. While Roma drew a blank in midweek, the forward hit a crucial winner at Bologna in their last trip. In the last three seasons, Dzeko has scored at least four goals against the teams who would go on to be relegated. We see him adding to that against a Lecce side who are weak defensively.

See all of our Serie A tips and match previews in our dedicated Italian football homepage.

Are Cagliari the Real Deal?

The penultimate game of the day comes from Sardinia, as Cagliari aim to keep their winning run intact. The hosts came into this season with a flurry of excitement around them. Cagliari’s summer signings made them outside contenders for European football, while they have been showing that of late. They may have started with back to back defeats, but their winning run has guided them back up the table.

Cagliari are aiming to extend their three-game winning run in this meeting with Verona. The visitors were among our picks for the drop this term, while we’ve seen little from them to doubt that. Verona have historically been poor on the road in Serie A, losing nine of their last 10 top-flight trips. With Cagliari in fine form ahead of Sunday’s meeting we are going with a home victory in our Cagliari vs Verona predictions.

For the rest of our 2019/20 predictions check out our Serie A outright predictions.

It’s been a dismal month for Milan, who don’t even have the Europa League excuse for their poor start. The Rossoneri are aiming to bounce back from three defeats in their opening five games, but this weekend’s clash could be tricky. Fiorentina went on a poor run since their 1-0 victory at Milan last term, but la Viola have steadied the ship enough that we’re backing them to repeat that scoreline in our AC Milan vs Fiorentina predictions.

AC Milan have struggled to impress all season, with just three goals to their name after five matches. Manager Marco Giampaolo is crowbarring in some of Milan’s best players into positions in his system that they don’t suit. His approach appears to be at odds with the squad, while neither seems capable of change. That’s not a good sign ahead of this meeting with a hungry Fiorentina side who have Franck Ribery back in full flow. The visitors are unbeaten in three, we expect them to make it four.