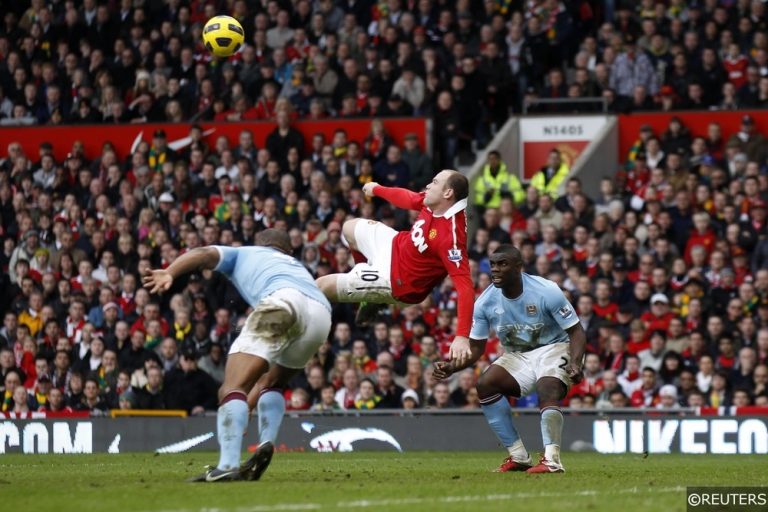 The Etihad Stadium is gearing up to host the 178th Manchester Derby on Sunday in what promises to be the latest in a series of bone-crunching altercations between fierce local rivals, City and United.

The Citizens come into Sunday’s fixtures hoping to tighten their hold on top spot in the Premier League, while United make the 5-mile trip east across Manchester, eager to show that the gap between the teams isn’t as huge as it appears.

The Manchester Derby has produced some of the most enthralling matches and stunning moments in the history of the Premier League – it’s a fixture that rarely fails to live up to its sensational pre-match billing.

Ahead of its latest instalment, we thought we’d have a Manchester Derby retrospection of sorts to whet your appetite before Sunday’s clash. Below we list what we think are the 5 best Manchester Derby goals scored in the Premier League era. Enjoy.

Read More: 5 Key Battles Which Could Decide The Manchester Derby

United played City under the floodlights at Old Trafford in early November 1994 during a season where they would eventually go on to relinquish their Premier League and FA Cup titles to Blackburn Rovers and Everton respectively.

With the scores locked at 0-0, flying winger Andrei Kanchelskis pinged a pass from just about the half way line, that dipped wickedly over City’s panicked defenders and in the direction of a certain French number 7.

The ball landed ever so slightly behind Eric Cantona, who cushioned the delivery into his path with his right foot, before slamming the ball past Simon Tracey with his left.  It was the first of 5 goals for United, who steamrolled over a massively inferior City outfit.

City and United’s meeting late in the 1995/96 meeting was a bitterly contested end-to-ender. United had taken an early lead when Eric Cantona converted from the spot after just 4 minutes. Georgian striker Mikheil Kavelashvili levelled it up on his debut for City on 40 minutes, before Andy Cole restored the visitors lead just a minute later.

City cranked up the pressure in the second half and restored parity through German attacker Uwe Rosler with a little over 15 minutes left on the clock. Just 180 second later, with United showing signs of capitulation, Eric Cantona fed a clever pass down the left for Ryan Giggs.

The Welshman struck a blistering first time shot from an unfavourable angle right into the top corner to silence Maine Road and United held on to win 3-2. The result helped to galvanise United on their way to winning the Premier League and FA Cup double for the second time in three years.

In one of the most unexpected derby batterings of the modern era, City trounced United 4-1 at the City of Manchester Stadium 3 days before St. Patrick’s day in 2004.

It was a day when everything that could go wrong went wrong for United. Former Liverpool star Robbie Fowler fired City into the lead after just 3 minutes, before former United youth team prospect Jon Macken, who traded red for blue, doubled the home side’s lead just after the half hour mark.

Paul Scholes halved the deficit on 35 minutes, but despite sustained pressure from United in the second period, City broke to restore their 2-goal buffer through Trevor Sinclair. With the game petering out, Shaun Wright-Phillips carried a non-threatening pass down the City right and cut in lazily towards the corner of the United area.

With nothing else on, Wright-Phillips unleashed a ferocious shot that cannoned off the underside of the crossbar and in past a shell-shocked Tim Howard. Wright-Phillips celebrated by doing the robot, but it was United defenders that were left short circuited.

Manchester United’s edge of the seat 4-3 victory over City at Old Trafford in September 2009 will always be remembered as one of the most thrilling matches ever played in the Premier League. The game’s iconic moment arrived 6 minutes into injury time when Michael Own poked home a winner that lifted the roof off the Theatre of Dreams.

However, the best goal of the pulsating contest was scored by Manchester City’s Craig Bellamy. United were leading 2-1 early in the second half when Carlos Tevez eased a simple pass out to Bellamy who had taken up a position close to the left wing.

Ignoring calls from his teammates for a layoff, Bellamy drove at John O’Shea, cut inside and let rip with a howitzer that flew past the ailing dive of Ben Foster and into the far top corner.

With both Manchester clubs in contention for a title tilt, United’s meeting with City in February 2011 felt like the most important derby years.

Nani’s first half strike for United was cancelled out by David Silva for City on 65 minutes and with the game firmly in the balance and time ticking by, Wayne Rooney produced one of the most seminal Manchester United Premier League moments.

A deflected Nani cross from the right arced in Rooney’s general direction inside the City penalty area. In a seamless union of air and player, Rooney sprung vertically into an explosive contortion and hung as if suspended for a split second. At the crest of Old Tafford’s collective sharp intake of breath, Rooney cracked the ball into the top corner of Joe Hart’s goal.

The bicycle kick was engineered by Rooney and executed with the aid of a shinbone, but it was still a breathtaking moment.

Betfair have an extremely lucrative offer for new customers for the eagerly anticipated Manchester Derby on Sunday. They are boosting odds on Man Utd winning to an eye-watering 150/1. Max Stake is £1 and the winnings are paid in free bets. (T&Cs apply)

888sport also have a tailored Manchester Derby offer for new customers this weekend. You can get enhanced odds of 5/1 for Man City to win and odds of 50/1 for United to come out on top. A  £10 minimum deposit before you qualify (T&Cs apply)

Mansion Bet are in on the action too. The have a terrific offer for new customers that gives new sign ups enhances odds of 20/1 for Man City to win on Sunday, or a huge 125/1 for United to triumph. A  £10 minimum deposit is required before you qualify. Max Stake £1. (T&Cs apply)

Remember, you can find all our Premier League match previews here: