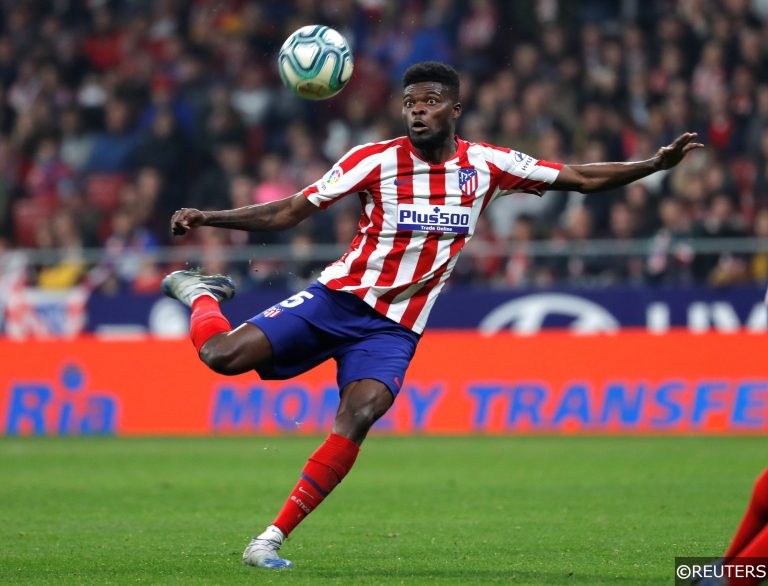 Arsenal are just “one step away” from finalising a deal to sign highly-rated Atletico Madrid midfielder Thomas Partey, according to reports surfacing on the continent.

The combative 26-year-old, who has been with Los Colchoneros since 2011, has forged a reputation as one of the most effective players in Europe in his position under demanding coach Diego Simeone, and now rumours are rife linking Partey with a summer switch to North London.

Having seen Partey establish himself as a force in La Liga and the Champions League, Arsenal boss Mikel Arteta believes that the Ghanaian’s skill-set could make him equally effective in the Premier League, and the £43.5m release clause in Partey’s contract certainly wouldn’t break the bank.

With the club languishing in 9th spot in the Premier League, Gunners’ supporters will be desperate to see the club engage in an aggressive recruitment drive this summer, and Partey ticks all the right boxes in terms of the type of player they would like to see arrive at the Emirates.

But what exactly would the anchorman bring to the table? How does Partey compare to Arsenal’s current set of holding midfielders? Let’s take a look.

While the fact that Partey’s Atletico Madrid are an infinitely more robust outfit than the notoriously soft-centred Arsenal side is a factor, it’s still evident that the Ghanaian defensive midfielder has been outperforming his Gunners’ counterparts this season.

Partey has made more tackles and more interceptions per La Liga game on average than Arsenal trio Granit Xhaka, Matteo Guendouzi and Lucas Torreira have in the Premier League this term, and while the Atletico star falls a little short of Xhaka in the fouling stakes, his figures are strong enough to suggest that he isn’t afraid to do the dirty work when required.

Interestingly, Partey’s pass completion percentage for the campaign is significantly lower than his prospective new team-mates at Arsenal, though that could well be down to the defensive, direct tactical mix favoured by his current coach in Spain, Diego Simeone.

Where would Partey slot in?

Since his arrival as Unai Emery’s replacement in December, Arsenal manager Mikel Arteta has generally preferred to field his Gunners team in a 4-2-3-1 formation, placing two screening midfielders in front of the four-man defence, to provide a solid platform for a free-wheeling final third quartet to spring forward off.

With his expertise firmly rooted in possession disruption over distribution, Partey would almost certainly thrive as one of the holding midfielders in Arteta’s set-up, and the Ghanaian’s ability to break up play and nullify counter-attacks would make him a vital protective force behind the marauding Aubameyang, Ozil, Pepe and Lacazette.

While rumours of an imminent switch to Arsenal are starting to intensify, there have been counter reports suggesting that Partey’s representatives have been drumming up interest in their client to force Atletico into overdue contract negotiations.

Having lived and played football in Madrid for the best part of a decade, Partey could prove difficult to dislodge from the Spanish capital, though the lure of a new challenge and a Premier League sized pay-bump would help to smooth the transition.

If Partey does indeed decide to call time on his spell with Atletico, Arsenal will likely have a list of big-name competitors for his signature. Already, Bayern Munich, Juventus, PSG, Man Utd and Man City have all been credited with an interest in the Ghanaian, and if Partey comes on the market this summer, the battle to snatch him away from the Wanda Metropolitano could be intense.