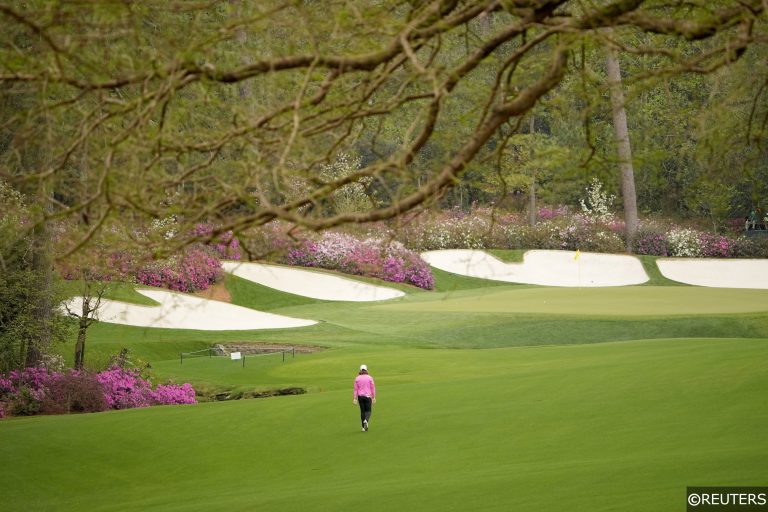 The first major of the year is almost upon us as golf’s biggest stars gear up for The Masters at Augusta.

We’ve called on Racing Post golf expert Steve Palmer for his best bets ahead of the showpiece event and he’s obliged with a 110/1 outsider tip, which he recommends backing as an each-way bet, and a 13/2 threeball treble for the first round.

Steve has already picked out Jon Rahm as a potential winner in our huge 58,994/1 acca covering all four majors. You can read that by clicking the link at the bottom of this page, but first read on to find out who he is backing as his best bet, each-way outsider tip and to see his threeball treble.

Jon Rahm has served his Augusta apprenticeship, with Masters form figures of 27-4-9-7-5, and last year his preparations were badly hampered by becoming a father just before the event. This time, having taken a long time off at the end of last year, the Spaniard should come out all guns blazing in 2022 and be in peak condition for the Masters.

The pick of the Masters outsiders is arguably the 110/1 about Thomas Pieters, who won the Abu Dhabi Championship in fine style at the end of January and may be ready to challenge for a first Major title at the age of 30. That Abu Dhabi success was a Rolex Series event with a strong field, played on a tricky course in tough conditions, and Pieters produced a mature final-round performance to get the job done. He was fourth on his Masters debut in 2017 and the former Ryder Cup star has shown he can flourish in elite company. The Belgian bomber is a dangerman.

Padraig Harrington can boss his early first-round threeball at Augusta (1.11pm UK and Ireland time), seeing off the powder-puff Mike Weir and amateur newcomer Austin Greaser. Overnight storms seem set to make the course play soft and long for the morning wave, but Harrington can still give his ball a healthy ride and has impressed this year.

Harrington can start the ball rolling in a 13/2 threeball treble with Justin Thomas (3.45pm) and Christiaan Bezuidenhout (4.40pm). Thomas is up against Hideki Matsuyama and amateur youngster James Piot. Matsuyama has been struggling with back and neck injuries in recent weeks, withdrawing after just 27 holes of the Texas Open last Friday, and the defending champion seems set to struggle.

Bezuidenhout can defeat Bernhard Langer and Cameron Davis. Langer has defied his age at Augusta over the last decade, but the German is 64 as he goes to post again, so surely Old Father Time will hinder his hopes of making the cut in future. At the other end of the scale, Davis is making his course debut. Bezuidenhout, an accurate and tidy operator on his third Masters start, seems by far the most likely of the trio to card a good score.

Back our 1517/1 Spring Treble covering three sports in April