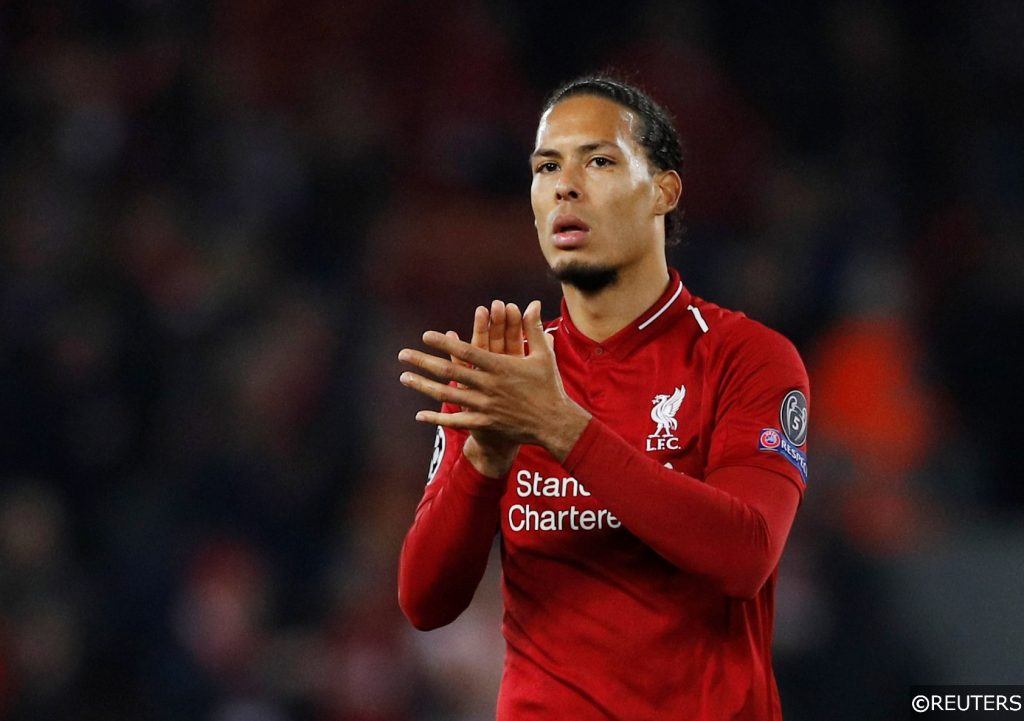 The build up to Saturday’s Merseyside Derby was steeped in intrigue as the unbeaten Toffees searched for their first derby win in ten years against a Liverpool side reeling from one of the most shocking defeats in recent memory.

The occasion certainly didn’t disappoint as Everton twice came from behind against their arch rivals before seeing Liverpool’s late goal ruled out for offside and Richarlison dismissed for a wild lunge on Thiago. A 2-2 draw was the result, but the fallout from that game could be much bigger than expected for Jurgen Klopp’s men.

Virgil van Dijk, Liverpool’s talismanic and towering presence in the centre of defence, was forced off after being recklessly clattered by Jordan Pickford. The Everton stopper somehow escape retribution, and it has been revealed that the previously ever-present Dutch centre back could now miss the vast majority of this season.

Many thought Liverpool had paid over the odds in January 2018 when they shelled out a whopping £75m for Southampton’s Virgil van Dijk. It was a world record fee for a defender, but he’s turned out to be well worth the cash.

Liverpool have accumulated 196 points in the two seasons with van Dijk at the back and have had the best defensive record in the league in both campaigns. You only need a glance at the stats to see how influential the big Dutchman has been.

Only Aymeric Laporte and Kyle Walker have better minutes per goal conceded records since van Dijk’s arrival at Anfield, and we saw exactly how much Manchester City missed Laporte last season when he was injured.

It’s not just defensively where he’ll be missed, either. Patrick van Aanholt (11) is the only defender to have scored more goals than van Dijk (10) since he signed for Liverpool, and just to hammer home how table-turning this injury could be Liverpool’s win percentage with van Dijk is 70%, whereas without him it drops to 46%.

Obviously Liverpool’s season is far from over, but with so many wild results the loss of van Dijk does blow the Premier League title race wide open and a number of teams will feel they can step up and take advantage of the Reds newfound defensive uncertainty.

Let’s have a look at the frontrunners:

Unsurprisingly, Manchester City have shortened to below evens despite their own rather shaky start to the season, while Liverpool are still second favourites ahead of Spurs. Fourth favourite, ahead of three of the traditional top six, are the unbeaten Everton, while a Villa side with a perfect record have shortened to 66/1.

Clear favourites to reclaim the Premier League trophy, Manchester City don’t look to offer much value with unappealing odds of 10/11.

Pep Guardiola almost undoubtedly has the best squad at his disposal, but even they haven’t been immune to what has been a quite incredible Premier League season so far. They were thrashed 5-2 at home to Leicester and followed that up with a sub-par 1-1 draw at Leeds.

A narrow victory over Arsenal at the weekend may have returned them to winning ways, but with just one league clean sheet so far and with injury problems up front they aren’t quite as dominant as they once were. That’s not even mentioning how much emphasis will be on that elusive Champions League crown this term.

Justified favourites they may be, but 10/11 seems mightily short for such an unpredictable season.

Jose Mourinho’s Tottenham side may have seemed a shoe-in to upset the pecking order at half-time on Sunday as they led West Ham 3-0, but their complete and utter capitulation late in the second half showed just how big a job Mourinho has on his hands.

They have one of the Premier League’s most feared attacks with Harry Kane, Heung-min Son and Gareth Bale, but the squad as a whole just seems to be lacking that winning spirit.

If we learned anything from Amazon Prime’s All or Nothing series, nice guys don’t win anything.

Now here’s one to think about. Could Everton, who haven’t won a trophy since 1995 and haven’t won the league since 1987, actually be in with a shout this year?

They have won four of their opening five Premier League games and have looked emphatic doing so. Dominic Calvert-Lewin and James Rodriguez have combined to devastating effect so far and the man at the helm – Carlo Ancelotti – has a list of honours as long as your arm.

That being said, Everton’s squad as a whole certainly doesn’t look strong enough to mount a sustained title challenge and it would take an effort akin to that of Leicester’s to pull it off.

Although, with Pickford’s disgraceful challenge leading to the table-turning van Dijk injury, it would certainly make for an interesting story.

Timo Werner got off the mark in the Premier League at the weekend and when you look at Chelsea’s attack, with Christian Pulisic, Mason Mount, Tammy Abraham and Hakim Ziyech all supporting the German goal-getter, it’s easy to see them as title contenders.

However, their capitulation against Southampton and the three goals conceded at West Brom earlier in the season speak of major problems at the other end.

The Red Devils may have required three late goals to take the full contingent of points from Newcastle on Saturday, but their dominance deserved a matching result and they will be hoping to push on from here.

That humiliating defeat at home to Spurs is still fresh in their minds though, and their earlier loss against Crystal Palace speaks of major problems at the back that the summer transfer window failed to address.

A look at the stats suggest it’s by no means out of the question, though. Only Liverpool and Manchester City have picked up more Premier League points in 2020 than Ole Gunnar Solskjaer’s men. 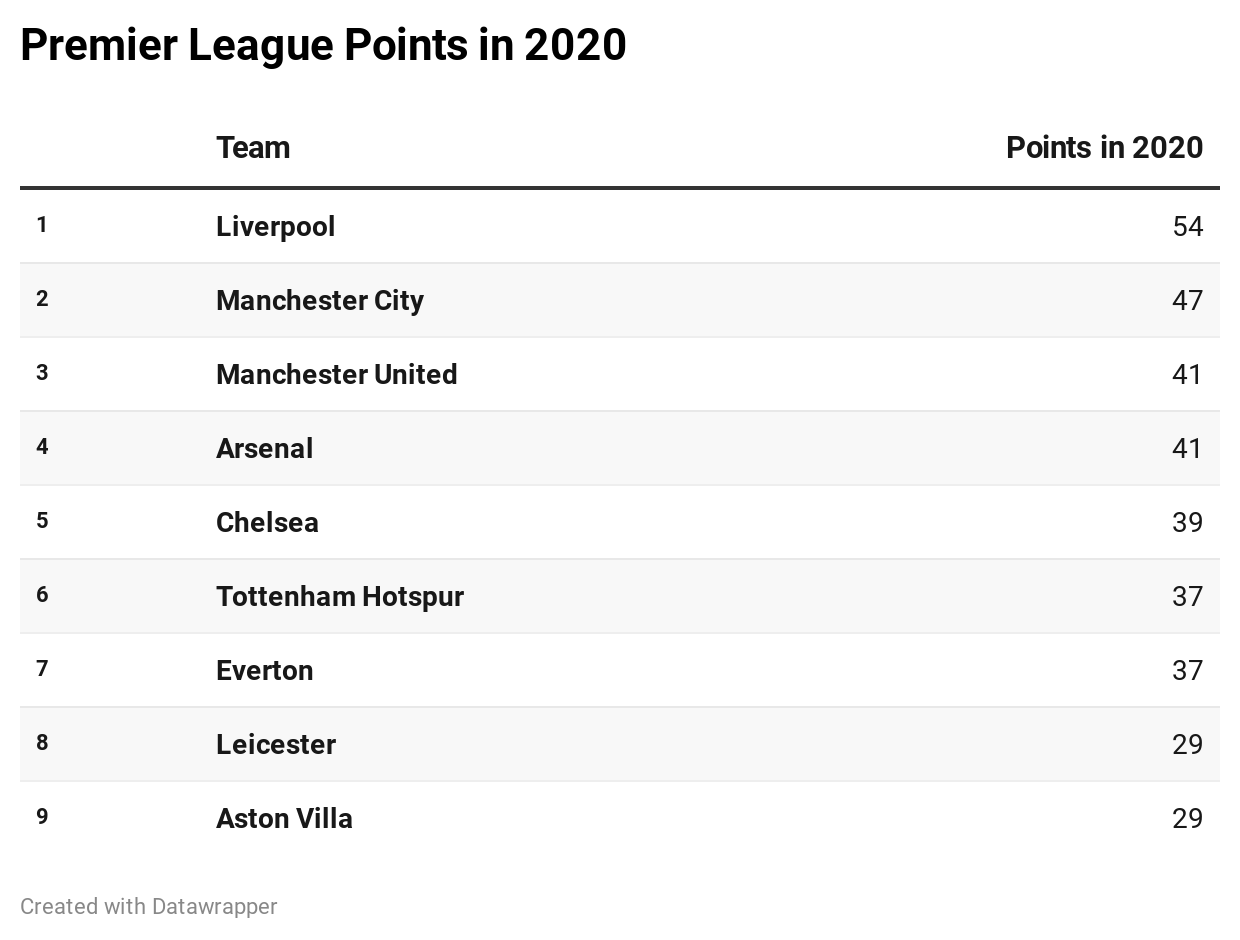 The above table also makes a very solid case for backing Arsenal to lift the Premier League trophy for the first time in over 15 years.

Mikel Arteta has transformed the beleaguered Gunners into a side that can match the best of them. They may have faltered at the Etihad on Saturday, but victories over Liverpool, Wolve, Everton and Manchester United since Arteta’s appointment illustrates the ongoing regeneration at the Emirates.

Their odds are significantly longer than any other member of the traditional top six, but we think they actually have a higher chance than most and they could be a good value pick, especially with no Champions League football to preoccupy them.

Narrowly avoids relegation one year before going on to lift the Premier League trophy against all the odds… where have you heard that story before?

Aston Villa, who last won the league title in 1981, avoided the drop by just a single point last season but four games into the new campaign and they are yet to drop a point. They sit 2nd with a game in hand over leaders Everton after their 1-0 victory at the King Power Stadium last night, and the confidence from their 7-2 demolition of Liverpool will surely keep morale high in camp for a long time to come.

Could they be the ones to repeat the success of 2015/16? The Foxes have certainly come a long way since then and their 5th place finish last season was their highest since that glorious campaign under Ranieri.

However, two straight defeats and a continued over-reliance on the ageing Jamie Vardy put them firmly in the category of outsiders. With so many other great teams, it would be a real shock to see Brendan Rodgers lead them to glory.