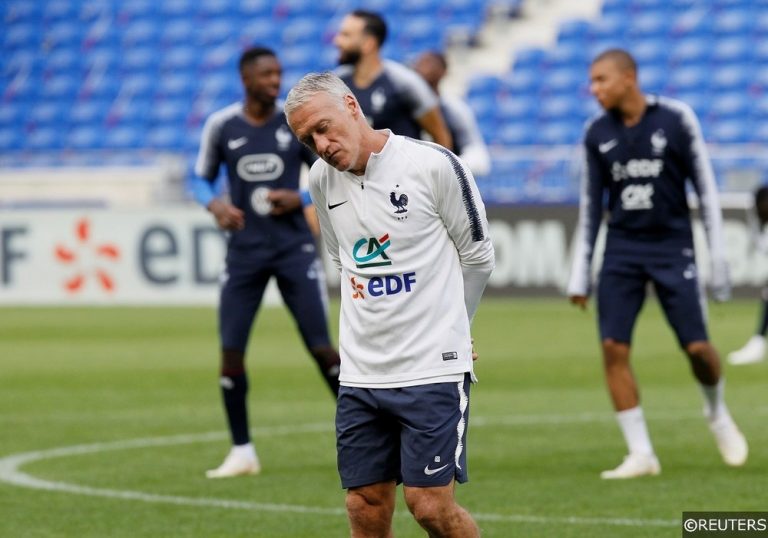 Every manager wants a strong squad at his disposal, a squad full of different options and a squad that has depth. On paper, France boss Didier Deschamps has assembled a collection of players who’re capable of going all the way in Russia. With physical presence, pace, power, creativity and end-product in abundance, the current Les Bleus squad is undeniably one of the strongest heading east for the World Cup, though having such quality only solves part of the puzzle.

Having a strong squad can often cause issues for a manager. Of course, no manager wants a squad devoid of quality all round, but Deschamps has so many options that finding his best XI could prove to be tricky.

If we go through France’s squad, it’s probably fair to say that there’s at least two viable options in every position. In terms of cover, this will please the boss, but in terms of selecting the correct starting XI, it does indeed create a problem. Some would call it a nice problem, though it is problem all the same.

As is the case with most teams, there are several players who’re going to start; players who, to all intents and purposes, pick themselves. In France’s case, the likes of captain and goalkeeper Hugo Lloris, centre-back Samuel Umtiti, midfielder Paul Pogba and the talismanic Antoine Griezmann are all shoo-ins for a place in the starting XI when France take to the pitch in Kazan on June 16th. Keeping this in mind, there are several players playing for five or six places in the line-up. 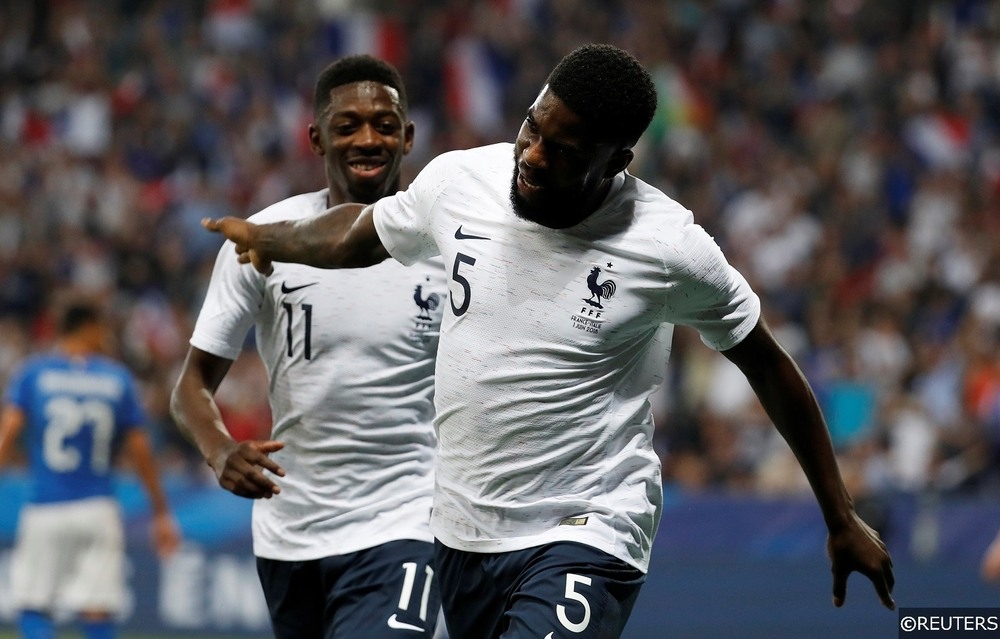 Of those who’re in the defensive section of the squad, Samuel Umtiti is probably the only guaranteed starter. After Lloris, the Barcelona centre-back, who was an integral part of the Catalonia club’s recent La Liga success, and who also started all three of Les Bleus’ warm-up fixtures, will surely be the first name on the team-sheet.

If the three recent friendlies are to be used as a guide, Umtiti’s partner in the heart of defence is likely to be either Raphael Varane, Adil Rami or Benjamin Pavard. In truth, as good as Pavard was for Stuttgart last season and as promising a player as he is, the youngster is probably behind the other two in the pecking order. Adil Rami offers plenty of experience, though he lacks the athleticism and pace of Real Madrid man Varane, who is very much the frontrunner to line-up next to Umtiti in Kazan next Saturday.

The full-back positions are tougher to predict. Having started two of the three warm-up fixtures, Djibril Sidibé is the most likely starter on the right. Both pace and the ability to consistently get forward into crossing positions make the Monaco player hard to overlook. However, the aforementioned Pavard, who is unlikely to start at his preferred position of centre-back, is another possibility at right-back. More calculated in his play, Pavard offers a measured approach as opposed to the fast and explosive style of Sidibé.

Left-back is the defensive position that is likely to cause Deschamps the biggest headache. Does the gaffer go with Man City’s Benjamin Mendy, who, like Sidibé on the opposite side, is a quick, attack-minded full-back? Or will it be Atletico’s Lucas Hernández who gets the nod against Australia. Selecting Mendy would be in-keeping with Deschamps’ focus on pace, power and explosive forward play, though if the focus is on defensive ability, the hard-tackling Atletico full-back is hard to ignore.

Defence is not the only area where there are some tough decisions to be made. What the recent friendlies have told us is that France will almost definitely start with a 4-3-3 system, so Deschamps must whittle it down to three midfielders. As is the case with Umtiti at centre-back, the mercurial Paul Pogba is nailed on to feature in the midfield three next Saturday, while the industrious and defence-minded N’Golo Kante is likely to feature alongside the Manchester United player.

If we assume that Pogba and Kante are in, this leaves Blaise Matuidi, Corentin Tolisso and Steven Nzonzi all battling for a single position. The latter of the three, who has won just four caps for Les Bleus, is the least inexperienced at international level and is the one who is expected to feature primarily as back-up.

This leaves Deschamps with a choice out of Juventus’ Matuidi and Bayern’s Tolisso. In terms of what they offer, Matuidi is more of an all-action box-to-box midfielder, while Tolisso is a more cultured passer with an eye for goal, so it really does depend on what Deschamps feels is more needed from a third midfield player. From an overall quality point of view, there’s little between the two, which means that the manager faces another tough choice. 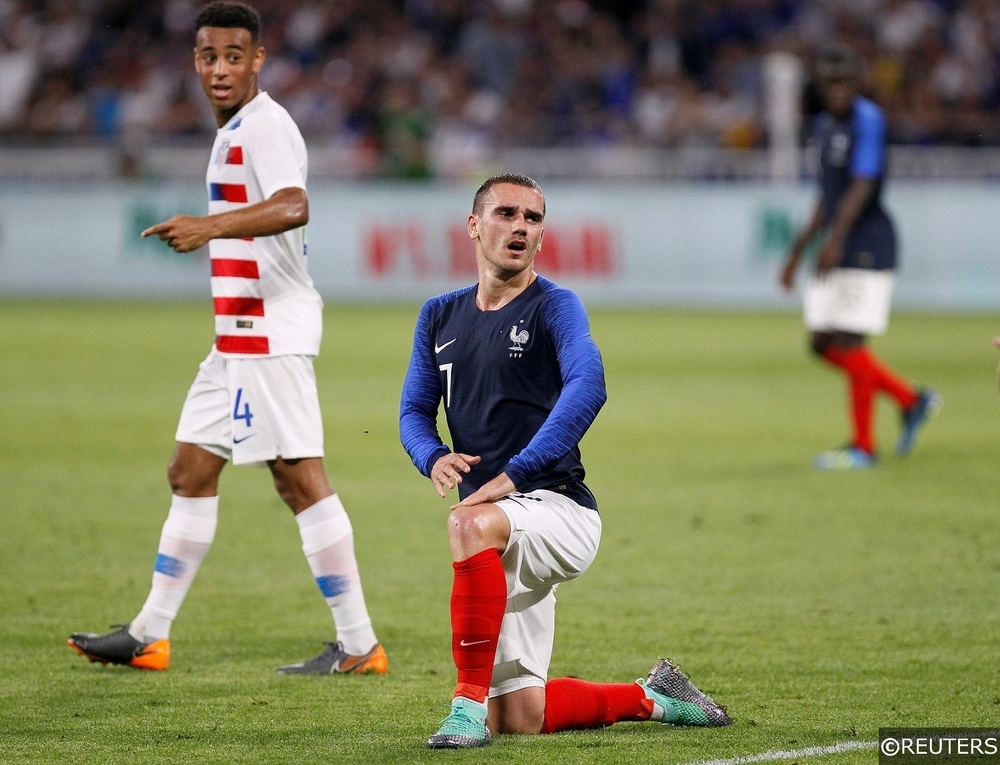 Since coming into the France set up back in 2014, Antoine Griezmann has been a talismanic figure for Les Bleus and that isn’t going to change now. The Atletico Madrid forward will go to Russia as Didier Deschamps’ main forward, and is not just a shoo-in to start against Australia but is pretty much guaranteed a place in the line-up throughout.

Depending on what shape Deschamps opts for at the top of the team, Griezmann could either play as a lone striker with two wide-forwards operating on the wings or he may even be deployed as a number ten behind two centre-forwards, as was the case against USA when France were last in action.

Having started all three of the warm-up matches, teenage sensation Kylian Mbappé is clearly at the forefront of Deschamps’ thinking, though the fact that the PSG forward is likely to feature prominently doesn’t solve the puzzle. Mbappé can play through the middle as he did against USA or as a wide forward as he did against both Ireland and Italy.

If we say that both Griezmann and Mbappé will fill two of the forward roles, which is nothing short of very likely, Deschamps must choose between several players who can fill the third position. Olivier Giroud will surely feature at some point, though his inclusion alongside both Griezmann and Mbappé coincided with France’s worst result in preparing for the World Cup. If a quicker, more agile forward, someone who’s adept at picking the ball up and running at the opposing full-back, is desired, then Deschamps has a choice between Ousmane Dembélé, Thomas Lemar and Nabil Fekir.

Dembele and Fekir both started one warm-up match each, so there’s probably not too much between the pair, though Lemar was confined to just two appearances off the bench. What happened in those three friendlies is hardly the be all and end all, though if we are to use those matches to ascertain the pecking order, it’s probably fair to say that Lemar is less likely to feature from the start against Australia than either Dembele or Fekir.

Based their recent style of play, coupled with what happened in the three warm-up fixtures below is how we predict Les Bleus will line-up when they take to the field in Kazan on June 16th.