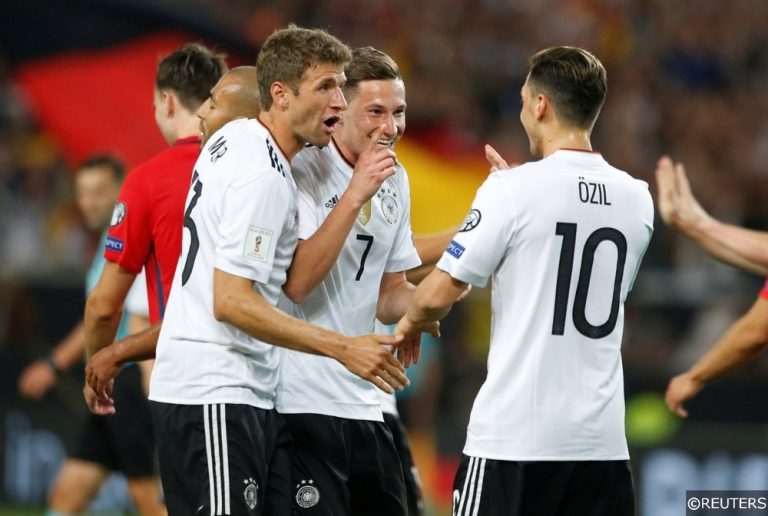 Just the Bundesliga play-offs and DFB Pokal final are still to play in Germany, so with the 2017/18 season almost at a close, most are counting down the days to the 2018 World Cup.

As reigning champions, many will be keeping a close eye on the Germans, and in particular whether the up and coming young guns like Joshua Kimmich and Leon Goretzka are worthy successors to the now-retired veterans like Philipp Lahm and Bastian Schweinsteiger.

Germany’s hunt to defend their FIFA World Cup starts in the groups stages, alongside Mexico, South Korea and Sweden. Group F is by no means the softest group in the tournament, but a top-seeded team like Germany should be able to come out ahead and go much further.

Read our article on Joachim Löw’s Germany squad for our thoughts on how the Germans could line up this summer.

Germany head to Austria for the first of two scheduled pre-tournament friendlies. Austria are one of many sides not travelling to Russia after failing to advance from UEFA World Cup qualification Group D. In fact, this will be their first meeting with the Germans since failing to qualify for the 2014 World Cup too. Austria have nothing much to play for and with defeats in 10 of their prior 11 meetings against them (D1 L10), this looks a decent opportunity for Joachim Löw to get a feel for his 2018 squad.

Germany then travel the short distance home to take on Group A underdogs Saudi Arabia in a second friendly at the BayArena in Leverkusen. As with any friendly, plenty of squad rotation is to be expected, but this one in particular may be used to give the younger talent some game time. Germany last met Saudi Arabia in the group stage of the 2002 World Cup, where Miroslav Klose bagged a hat-trick in a massive 8-0 win. Whether the Germans will push for a similar scoreline in a non-competitive setting is yet to be seen, but this should be one final confidence booster before setting off for Russia.

Germany will find themselves in Russia not long after, facing Mexico in the Russian capital for the opening game of Group F. Die Mannschaft last met Mexico in a 4-1 win in the semi-finals of the 2017 Confederations Cup, with both Werner (single) and Goretzka (brace) getting themselves on the score-sheet. Germany have never lost to Mexico (W3 D2) either, so Joachim Löw should like his odds of getting three points straight off the bat.

Mexico will be no pushovers though. Knocked out by the Netherlands in the Round of 16 in the last World Cup in controversial fashion (yes – that injury time Arjen Robben dive…), they’ll no doubt be hoping to get out of the groups too. What is particularly dangerous is that Mexico have plenty of top talents who also have experience in the Bundesliga. Eintracht Frankfurt’s Marco Fabian, who scored a long-range stunner in that Confederation Cup clash, and Carlos Salcedo are two such names. Not forgetting ex-Bayer Leverkusen striker Javier ‘Chicharito’ Hernandez.

Mexico are on paper arguably Germany’s toughest opponent of the group phase. However, Joachim Löw will know not to take their second game against Sweden lightly. Currently ranked 18th in the official FIFA rankings, the Scandinavians no longer count on talisman Zlatan Ibrahimovic. Four-time champions Italy, who will not be present at the 2018 World Cup, are an example of what can happen when the Swedes are underestimated.

Again, this should be a match the Germans fancy themselves in, but Sweden also have a few key players that have some experience of German football. Midfielder Emil Forsberg, who plays for RB Leipzig, will be Sweden’s chief hope of unlocking that tight Germany defense, while Hamburg’s Albin Ekdal and Werder Bremen’s Ludwig Augustinsson will seek to keep out Timo Werner at the other end.

Germany travel to Kazan for their third and final Group F match against South Korea. By this point, Germany may already have guaranteed their progression through to the knockout stage of the tournament, but don’t expect Joachim Löw to put on the brakes. Germany are renowned for their efficiency and hard work on the pitch, so the Koreans won’t be having it easy as their last opponents of the groups.

For Bundesliga followers, South Korea is once again an opportunity to spot a few names. Augsburg duo Ja-Cheol Koo and Dong Won Ji are likely to be involved alongside Borussia Dortmund’s Joo-ho Park. Former Leverkusen and Hamburg forward Heung-Min Son will of course also be the star player on the back of most Korean fan shirts. At 59th in the latest FIFA ranking, South Korea remain, however, the weakest side in the group and shouldn’t be too much trouble for the reigning champions.

Read our World Cup Fact File for more interesting trends to take note of this summer.

3rd July – Germany vs Switzerland (Round of 16)

Should Group F favourites Germany progress to the knockout stages, they’ll be looking at facing either the winners or runners up of Group E, which includes Brazil, Switzerland, Serbia and Costa Rica. On paper, anything other than Germany to win their group would be a surprise. With Brazil likely to win theirs too, we could easily see something like Germany vs Switzerland in the Round of 16.

Germany have not played against the Swiss competitively since 1938, and their most recent friendly in 2012 saw them defeated 5-3. Such a fixture still shouldn’t worry them too much, though. This would be far from the toughest draw Joachim Löw’s men are likely to get, and the fact that Germany haven’t failed to make the quarter finals since 1978 says a lot about them.

Here’s where things start getting really theoretical. Should the rest of the tournament play out as expected, Germany will be looking at either Poland or England for their quarter final clash on July 7th. We’re going to go out on a limb here and saying that England manage to make it through to this point (ambitious we know…).

Germany are just three matches away from claiming a 2nd consecutive World Cup title and face an England team that haven’t made it past the quarter finals of a major tournament since Euro 1996. Germany may have won just one of their last three friendly matches against Gareth Southgate’s men (W1 D1 L1), but with the Three Lions never quite living up to expectation, the story should end for them here more often than not.

Still with us? Well, if Spain manage to top Group B ahead of Portugal and then beat likely opponents Russia and Croatia in the knockout stages, Germany would have their toughest challenge yet. Spain are one of the competition favourites and kept the joint tightest defense in European World Cup qualifying with just three goals conceded. Add that to their lethal offense, and Julen Lopetegui’s Spain look as dangerous as ever.

Spain last faced Germany competitively in the 2010 World Cup semi finals, which the Spaniards went on to win. Bringing together two of the strongest European sides in another monumental semi is about as predictable as a coin toss. On the off chance that Germany win the flip though…

Joachim Löw will be aiming for a repeat of the last meeting between them. Brazil are also among the favourites to lift the World Cup and would love to get a chance at revenge for the humiliation of *that* 7-1 defeat to the Germans four years back. Germany, meanwhile, would face Brazil in Moscow looking to equal the Brazilians’s record as five time World Cup winners.

Germany would have a hill to climb, with Brazil having won five of their seven World Cup finals, but could take solace in that European World Cups tend to favour European winners. It wouldn’t be too far-fetched to see Germany come this far, but the knockout stages can be perilous. Whether or not Germany’s young talents can help replicate the form of their 2014 World Cup winning squad and ultimately win the tournament again is up for debate though!