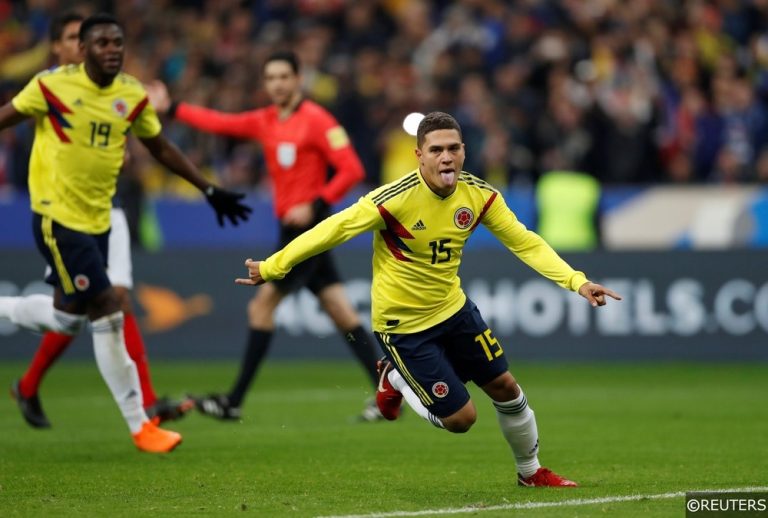 Once dubbed the Colombian Messi, Juan Fernando Quintero is one of a select group of players at the 2018 World Cup looking to avoid being swept under the dreaded “could have been” footballing carpet.

Football, like most sports, is awash with athletes who have shown early promise and were tipped for greatness; only to drift away into the depths of obscurity. Quintero’s story itself has yet to reach its conclusion and he will be desperate to finally announce himself on the world stage over the next month.

Quintero features as the player to watch in our breakdown of the Colombian side at the 2018 World Cup.

Born in Medellin and having came through the famous Envigado ranks, that have also bore fruit to the likes of Fredy Guarin and James Rodriguez, Quintero looked destined for greatness from an early age and was dubbed the future of Colombian football and one of the planet’s biggest talents.

After showing his promise in brief spells at Envigado and giants Atletico Nacional, Quintero, like most young players was immediately transferred to European football; so how was it that as recent as last year he found himself back in the domestic game with Independiente Medellin, playing in stadiums he had long since left behind him?

Quintero is no stranger to the world stage; indeed most of the worldwide hype surrounding him at one time stemmed from the 2013 Under 20 World Cup, where he dazzled in an otherwise uninspiring side; in addition to winning the South American championships at the same age group that year.

A move to Porto followed, after a year-long stop off at Italians Pescara, as well as a call up for the 2014 World Cup; Quintero’s trajectory looked to be heading in only one direction, and that was up. On the 19th of June 2014 the pint sized play maker hit the highest point of his career to date, coming of the bench to notch the winner in Colombia’s 2-1 win over the Ivory Coast in the group stage, helping to send the nation on the way to their most successful ever World Cup run.

It looked for all the world that Quintero would go on to be one of the world’s greats, but it just hasn’t happened for him since. Fame and fortune got inside the prodigy’s head and the exact qualities that had got him to where he was began to diminish, with off-field glories now looking more appealing.

Whereas fellow Envigado graduate Rodriguez had used Porto as a launchpad into the top of the European game, Quintero faltered, with weight issues and his reputation for partying seeing him shipped out on loan to Rennes, where an unsuccessful spell had him considering retirement in pursuit of a music career.

Nonetheless, it was a move back to the gritty streets of Medellin that provided Quintero’s renaissance and the chance to knuckle down. A loan to Independiente Medellin, was a move that surely humbled the attacking midfielder and made him realise the ruthless nature of the business.

Back on the domestic scene and playing against clearly inferior opponents, Quintero was simply a class above the one in which he found himself and the spell allowed the chance to regain confidence.

Looking a real talent once again, albeit with professionalism problems still rife, Quintero at least looked to be turning things around and his upturn in output convinced one of South America’s real giants to take a punt on him, with River Plate announcing his signing at the start of the year.

Though he’s found it hard to nail down a place in a strong River side at first, eye catching cameos from the bench saw the Colombian start Los Millonarios’ last two league games and he’s firmly a fan favourite at the Estadio Monumental now, with supporters desperately hoping the club use their option to turn the current loan into a permanent deal.

However, you feel that Quintero has bigger fish to fry now. He’s returned to South America and made a big leap into Argentine football, but if he can turn on his undoubted quality in Russia, a second stab at European football will surely await.

Going into the competition, he’s been linked with numerous moves and whilst he’s not an unquestionable starter in Jose Pekerman’s side for the opener with Japan, his confident state and excellent understanding with James Rodriguez, which was there for all to see in Colombia’s friendly with Egypt at the start of the month, surely has him close to the starting XI, having also notched the winner in a famous 3-2 win over France in March.

Whatever happens, one can only hope Quintero is given his chance at the World Cup, and that he grasps it once again and doesn’t make the same mistakes as in the last four years. Football is often called the beautiful game and it’s players like Quintero that make it exactly that.

Possessing a magical left foot, jaw-dropping dribbling ability, all with a tendency to score spectacular goals, Quintero is exactly the type of player that can light up even the dullest of affairs and it’s that kind of profile that typically goes on to provide the World Cup’s greatest moments and leaves viewers purring at their television screens

As much as Quintero needs the World Cup, the World Cup needs mavericks like him and the two combined could turn out to be a match made in heaven. Whilst James Rodriguez is undoubtedly Colombia’s talisman, Quintero is one of the only players the South Americans possess that appears to be on the same wave length and with a deadly striker in the form of Radamel Falcao in front of them, the trio could well come together to form a formidable partnership.

As easy as it is to criticise Quintero for failing to make the most of the natural ability and subsequent opportunities he’s had, one should also commend him for showing the character to bounce back from the brink of obscurity.

There’s still plenty of work to be done, but Quintero’s book is one that certainly feels as though it has many chapters still to be written; and no better a start can be found than on the world’s biggest stage in front of a global audience.

Quintero has had a great start to the World Cup, putting in some excellent displays and he’s a player England will be keen to keep quiet when the two teams face off for a place in the Quarter Finals.