Liverpool struggled to break through a stubborn Stoke defence on Sunday, but eventually a piece of magic by Phillipe Coutinho settled the game with a 1-0 victory.

But they certainly didn’t look convincing at the Britannia, Stoke controlled the ball well throughout the match and actually had more attempts at goal than Liverpool.

Overall, it was a very drab match in which both sides looked particularly bothered about getting a goal. There were only 6 shots on goal in the entire match, and the £50 million plus that Liverpool have spent on strikers doesn’t seem to be paying off yet.

But to be fair, Stoke did play well. I can’t see Bournemouth’s defence standing up as well to the power of Benteke.

Bournemouth did play well against Aston Villa, and again it was a late goal that settled the scoreline when Rudy Gestede powered in a trademark header for Aston Villa to make it 1-0.

Bournemouth should have got more from the match though, they had more opportunities than Villa and controlled the match throughout the first half.

But this inability to finish off chances won’t get them very far in the Premier League, as they will get far fewer chances than they did in the Championship.

Despite their attacking nature, I think Bournemouth’s plan at Anfield will be to park the bus and hope for the best.

But Bournemouth’s defence isn’t as good as Stoke’s, and I would expect Liverpool to have an easier time breaking the side down, especially at Anfield. Not to mention the fact they have a little Brazilian capable of moments of genius.

I think they could get a few against an overwhelmed Bournemouth defence, and odds of 6/5 for a Liverpool -1 Handicap Win look like very good value. 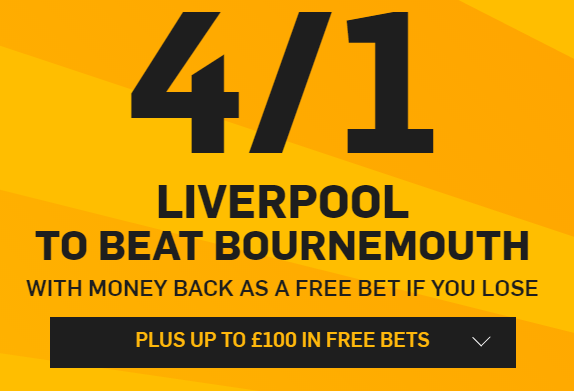