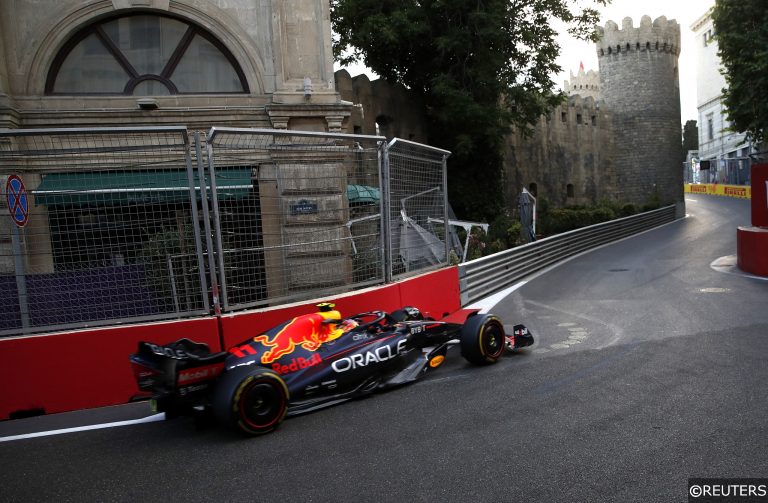 Sergio Perez took the prestigious chequered flag in Monaco last time out and this weekend the Formula 1 entourage heads to the scene of Perez’s last victory as the 20 drivers take on the streets of Baku in the Azerbaijan Grand Prix.

While still a street circuit, Baku is a very different beast to Monaco. It features a 2-kilometre stretch of full-throttle racing on the main straight  and has produced some of the most dramatic races in recent history.

Charles Leclerc to be fastest qualifier at 1/1

Charles Leclerc was two-and-a-half tenths up on Sergio Perez in FP2 and over a second up on his teammate and the Monegasque driver has run well in Azerbaijan in the past.

He was on pole last year in a less competitive Ferrari and the Scuderia have qualified fastest in two of the last four Azerbaijan Grand Prix.

Add that to his five poles from seven races this season and his 100% record of front-row starts and he looks a good bet to qualify fastest again on Saturday.

Alexander Albon has outqualified his teammate in five of the seven races so far and both occasions in which he didn’t come with caveats. Albon failed to set a time at all at Imola and was disqualified in Australia due to the lack of a fuel sample, although the time he did set in Melbourne was over a second quicker than Latifi.

Charles Leclerc has qualified on the front row in all seven races this season and has been beaten to pole position just twice, neither of which were by teammate Carlos Sainz.

Fernando Alonso was running in the top five in both Free Practice sessions, while the best his teammate Esteban Ocon could manage was ninth and the Frenchman has been outqualified by Alonso in three of the last four races.

Lewis Hamilton continues to struggle to get to grips with this Mercedes and in Monaco was outqualified by George Russell for the third time in four races. Russell was over three-tenths up on Hamilton in FP2, too.

Mick Schumacher has outqualified Kevin Magnussen just twice this season and on both occasions the two Haas cars lined up side-by-side on the grid, while Magnussen has managed some incredible qualifying showings such as his fourth-place at Imola.

The struggling Daniel Ricciardo failed to go any faster than 14th in Free Practice and was over a second off his teammate in FP1. Lando Norris has gone faster than Ricciardo in five of the seven races this season and the Australian.

Max Verstappen isn’t used to being beaten by his teammate but the reigning World Drivers Champion struggled a bit in Free Practice and could have some ongoing rear wing issues. Perez outqualified him in Monaco last time out and in Saudi Arabia earlier this season and has taken three podiums from five career trips to Baku.

Yuki Tsunoda was faster than Pierre Gasly in FP1 and the Japanese driver continues to be undervalued despite some strong performances. He has outqualified Gasly in three of the last four Grand Prix and has only qualified more than two positions behind his teammate once this season.

Sebastian Vettel missed the first two races of the season with Covid but leapt straight back into action and has outqualified Lance Stroll in four of the five Grand Prix since, including dragging the Aston Martin into Q3 in Monaco last time out.

Valtteri Bottas has been sensation in the Alfa Romeo this season and it’s no surprise that he has outqualified rookie Guanyu Zhou in all seven races this season, with five Q3 appearances to his teammate’s none.

This will be the fifth instalment of the Azerbaijan Grand Prix and the previous four have given us just one win from pole position, and Red Bull have been big beneficiaries of that trend, too.

They have won two of these four Grand Prix, neither of which came from pole, and it has been the blue of Red Bull on the top step of the podium in each of the last four races this season.

Three of those wins have gone to Max Verstappen and I expect him to bite back after a relatively disappointing weekend in Monaco.

The streets of Baku are suited to Red Bull’s power-focused car, too. The 2-kilometre main straight should provide plenty of overtaking opportunities and, looking at Ferrari’s porpoising issues in Free Practice, the Red Bulls shouldn’t have too many issues passing them on track.

Both Max Verstappen and Sergio Perez have joined one another on the podium in three of the last four races and, as detailed above, Baku is well-suited to Red Bull.

It is also well-suited to Sergio Perez, who has enjoyed some phenomenal results around Azerbaijan.

Including the 2016 European Grand Prix held in Baku, Perez has been on the podium in three of his five trips to Baku and two of those were in a Force India, while he also finished an impressive sixth here in the 2019 Racing Point.

Verstappen and Perez have nine podiums between them this campaign and I’m backing them to make it 11 on Sunday.

Both cars points finish – Alpine at 5/4

Fernando Alonso – who will become the longest serving F1 driver in history on Sunday – was flying in Free Practice as he outpaced both Mercedes in both sessions and teammate Esteban Ocon was also placed in the top ten in both sessions.

Ocon has generally been the more consistent in race conditions and has scored points in five of the seven races so far this season, and he would have done in Monaco were it not for a five-second penalty.

Alonso struggled with reliability earlier in the season but has scored points in his last two races.

A promising start to the season has given way to reliability issues for Kevin Magnussen and he failed to finish for the second time in three races in Monaco.

Only one of these classes as a retirement, as a driver is classified if they complete more than 90% of the race distance, but it is still a major worry for Haas.

To make matters worse, teammate Mick Schumacher is destroying more car parts than a scrapyard this season. He ripped the car in two at Monaco, crashed so badly in qualifying in Saudi Arabia that he couldn’t start the race and now faces another street circuit.

Schumacher had the dubious honour of winning the F1 Destructor’s Championship last season after causing almost $5 million of damage, while Haas had both cars finish the race in just four of the last 11 races last season.