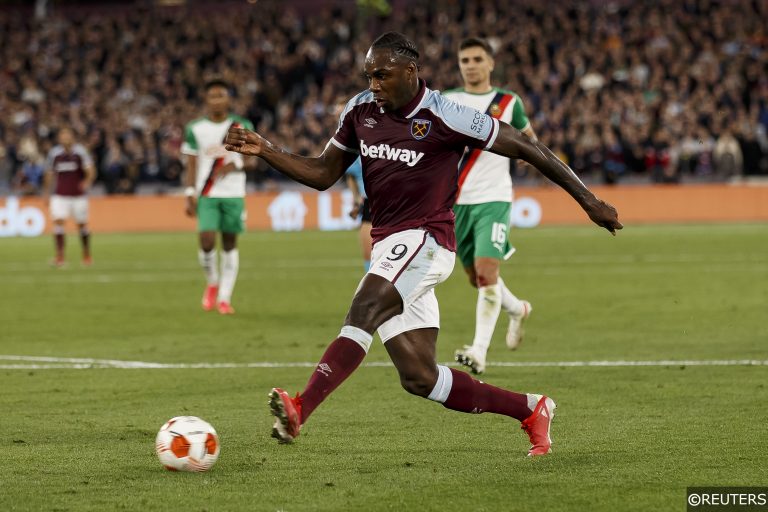 There are plenty of price boosts on offer for these two first leg ties and we’ve picked out a few of the best available, including a huge 25/1 option for West Ham’s home game against Eintracht Frankfurt.

We’ve backed RB Leipzig hotshot Christopher Nkunku to score in our Match Prediction and the Frenchman is a tempting 13/2 to manage two or more with Skybet.

Nkunku has 10 goals in as many games in European competition this season, with Leipzig dropping down into the Europa League after the Champions League group stages, and he scored a brace in the second leg win over Atalanta in the previous round.

We’re expecting both teams to score when West Ham entertain Eintracht Frankfurt and Jarrod Bowen is a contender for an anytime effort after he scored in both legs in the previous round against Lyon.

The Hammers forward is averaging 2.1 shots-per-game in all competitions and 0.4 of those are from outside of the area, so there is a chance he could grab a goal from distance when Frankfurt visit London.

West Ham’s Tomas Soucek has a modest six goals in 41 appearances across all competitions this season but his strikes have come at key times, including in the home leg of the win over Sevilla and a second half leveller against Burnley earlier this month.

Soucek is averaging 1.5 shots-per-game across all competitions for club and country and 0.6 of those are with his head.

Nkunku has been boosted from 14/5 to 7/2 to open the scoring for RB Leipzig by William Hill and the 24-year-old may well be the man to strike first on Thursday. Nkunku has scored in three of his last seven appearances for the Bundesliga club, hitting four goals in total, and has opened the scoring twice in that time.

We have tipped Declan Rice as a good big price option for an anytime goal as West Ham entertain Frankfurt, on the basis he has four goals in 12 cup games this season, and he is 4/1 to register an attempt on target from outside the box with Betfair.

Rice averages 1.0 shots-per-game in the Europa League, on average 0.5 of those are from outside the box and 0.5 are on target – so he may be able to test the keeper from range on Thursday.