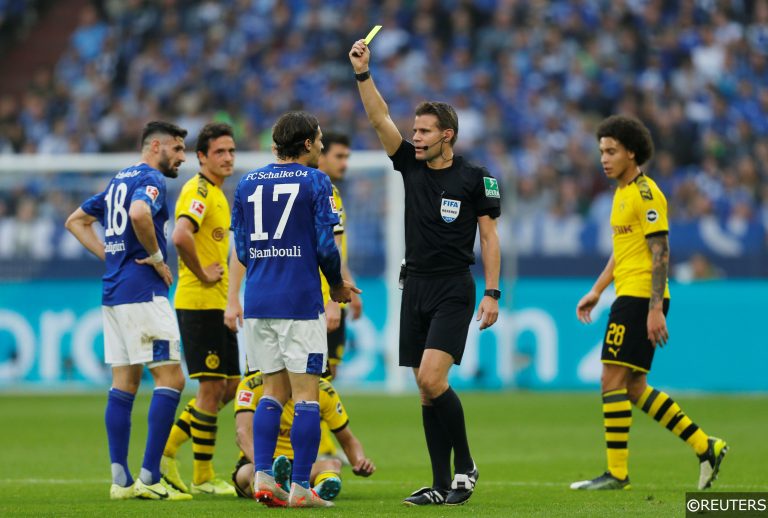 The Bundesliga makes its long-awaited return this weekend, and while there is plenty of German fußball to look forward to, Saturday’s Revierderby between Borussia Dortmund and Schalke 04 is undoubtedly the stand-out fixture.

As bitter local rivals, Dortmund and Schalke will be desperate to kick off the remainder of the 2019/20 campaigns in the best possible fashion and at the other’s expense.

Alongside the bragging rights on offer, the feuding neighbours will battle it out for three precious Bundesliga points that could make all the difference in their respective pursuit of title glory and European qualification.

Saturday’s derby will take place behind closed doors at the Signal Iduna Park, though the explosive action on the pitch should make up for the lack of atmosphere on it.

To help you get in the mood for the game, we’ve compiled a list of our favourite request a bet selections for Borussia Dortmund’s clash with Schalke. Check them out below.

What is Request a Bet?

Ever wanted to construct and customise your own hybrid football bet using different markets from the same match? Now you can!

Many major bookmakers are handing a large chunk of control to their customers by offering their own request a bet and build a bet features.

The features, which have exploded in popularity among punters, allow bettors to tailor their football bets in a direction specific to their own ideas and predictions.

By incorporating several different football match markets (corners, cards, goals etc.) into one single selection, customers can design and tailor their own multi-part bets, which are priced and made available to back immediately by the bookmakers.

Make sure to check out FST’s favourite #OOT (OddsOnThat) selections for Saturday’s other Bundesliga fixtures here!

Dortmund to Win; Dortmund Most Corners & Schalke 04 Most Cards @3/1

Title chasing Dortmund are statistically the best performing team at home in the Bundesliga so far this season, winning nine and drawing three of the 12 league matches they’ve contested on their own patch during the 2019/20 season so far.

As one of the division’s most dominant sides, Dortmund tend to win far more corners than their opponents too – in fact, Der BVB rank third in the Bundesliga this term for average corners won per game (6.2), and no team has conceded fewer corners on average than Lucien Favre’s men per 90 minutes (3.08).

In contrast, Schalke are conceding a much meatier 5.18 corners per Bundesliga outing in 2019/20, while they are also picking up more cards than their neighbours, who hold the cleanest disciplinary record in the entire German top-tier.

Dortmund have plundered a whopping 41 goals in their home contests so far this season, hitting the net 3.41 times per game on average, while their strong showing on corners (as detailed) in the first section also offers promise.

Schalke don’t generally amass too many bookings, averaging just 1.68 yellow cards per game in the Bundesliga this season, though on a derby battle ground where they will be forced to defend for large periods, there is every chance their final card tally will be higher than usual.

Three Schalke players were cautioned in the last Revierderby and it might have been more had referee Felix Brych not been so lenient.

While Dortmund have had few problems flexing their considerable attacking muscle so far this season, there is a counter-train of thought that suggests they might not be able to cut loose as easily this weekend against a defensively robust Schalke.

Die Konigsblauen kept Dortmund off the scoresheet last November, becoming one of only a handful of teams to keep BVB’s talented forward line quiet this season in the process.

Schalke might not be able to fully repeat the trick at the home of their rivals, though they could have enough defensive strength to keep the score down.

In that November derby, a total of 10 corners were awarded to both teams combined and five cards were shown overall to players on both sides, and our 125/1 pick has figures that land close to the mark for each of those game stats.

English international Jadon Sancho has been in phenomenal form this season, notching 14 goals and 15 assists in 21 Bundesliga starts for Dortmund, and in the absence of the injured Marco Reus, the 20-year-old will bear plenty of attacking responsibility on his shoulders this weekend.

Sancho played for Dortmund in their uncharacteristically fruitless 0-0 draw with Schalke in November last year, where the 20-year-old wide attacker did more than most as his team toiled in their attempts to break the deadlock.

Of Dortmund’s four attempts on target in Gelsenkirchen that day, three came from the feet of Sancho, we think he is well priced to test keeper Markus Schubert multiple times again this weekend.

The more straightforward aspect of our final selection is the one that backs Dortmund to win, and though winning to nil isn’t something that you would readily associate with Favre’s team, BVB are actually quite good at it – especially at home.

Somewhat surprisingly, Dortmund have kept a clean sheet in an impressive 58% of their Bundesliga home matches this season -a figure that marks them out as the division’s best defensive unit on their own patch.

It’s also worth noting that Schalke failed to register in 50% of their 12 assignments since August, which is the highest figure in the Bundesliga.