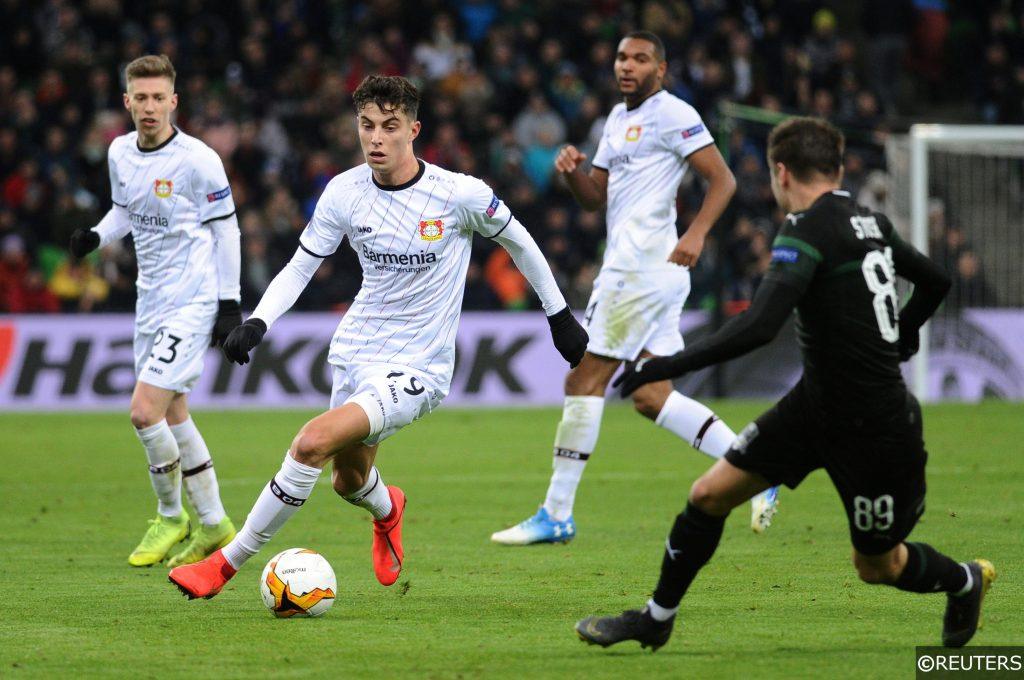 Kai Havertz has been a well known name among Bundesliga enthusiasts for quite some time but now, with the whole of the footballing world tuning in to watch the German top flight, the rest of Europe’s football fans are quickly realising just how big of a deal Bayer Leverkusen’s star man is.

The 20-year-old netted another brace at the weekend as Bayer overcame Borussia Monchengladbach in a crucial clash in the race for Champions League qualification. This followed on from his double at Werder Bremen to make it nine goals and five assists in Havertz’s last 10 club appearances.

There’s no wonder he’s being touted as the future of German football and it’s no surprise that many of Europe’s top clubs are closely monitoring his situation.

As Havertz glided through the Borussia Monchengladbach defensive lines to coolly slot the ball past Yann Sommer for the game’s opener on Saturday, there were hints of just how good he could become.

The 6’2″ youngster has spent the majority of this season operating in an advanced midfield position, but an injury to leading striker Kevin Volland has opened up a new avenue for Havertz to explore. He has scored five goals in his last three Bundesliga games in the absence of Volland, adding an assist in for good measure.

Speaking to Bundesliga.com after his brace at Gladbach, Havertz said: “I have a free role because I don’t feel like I have to stay between the defenders.”

“I can drop back into midfield, which has always been my game, so not a great deal has changed, other than me becoming even more dangerous in front of goal and needing to get into the penalty box more. That suits me very well.”

Echoing his statements, it certainly does suit him very well. Havertz attempted four shots on Saturday, scoring two of them and hitting the woodwork once. He was similarly ruthless last weekend, scoring from two of his five shots, all of which came from inside the area.

Until the controversial second-half penalty on Saturday Volland was Bayer Leverkusen’s joint-top scorer in the Bundesliga this season, but he’ll now be wondering if he’ll even get in the team when he returns from injury.

Havertz, not content with being Bayer Leverkusen’s star midfielder since he was just 17 years of age and becoming the youngest ever player to reach 50 Bundesliga appearances, has now made the striker’s role his own.

Unsurprisingly, Kai Havertz has drawn comparisons to legendary Germany midfielder Michael Ballack. Both are/were goalscoring German midfielders who wooed the Bayer Leverkusen crowds in their formative days, but even Ballack’s record doesn’t compare to Havertz’s at this stage.

Havertz, at the age of 20, has already amassed 112 Bundesliga appearances, 34 goals and 21 assists for Leverkusen.

Ballack didn’t even make his first Bundesliga start until he was 21, although he did help his newly promoted Kaiserslautern team to an unbelievable title win that year.

Of course, Michael Ballack’s career went from strength to strength after that. He ended up winning five league titles and picked up runners up medals in the Champions League (twice), the European Championships and the World Cup. He scored 108 league goals throughout his career and netted 42 times in 98 appearances for Germany.

Havertz may be ahead of the curve somewhat, but you won’t find him complaining about the comparisons.

7 Bundesliga midfielders to keep an eye on this season