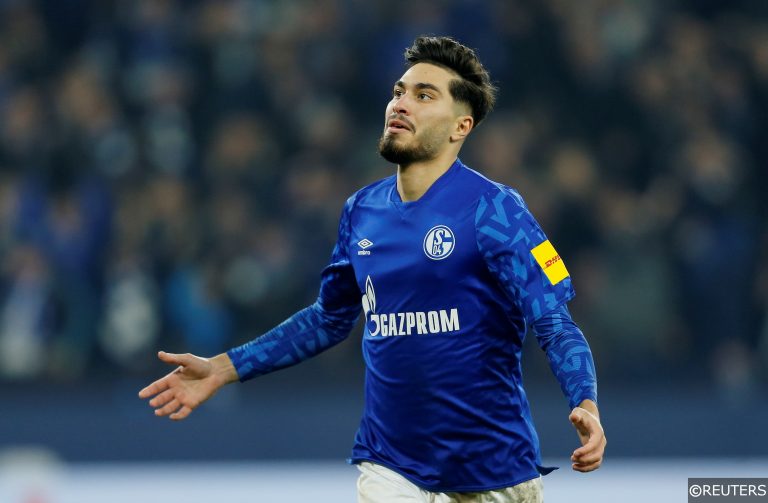 Germany’s Bundesliga has traditionally been home to some of football’s most talented midfielders.

From defence splitting schemers like Kevin de Bruyne, Toni Kroos and Andreas Möller to marauding goal-getters like Michael Ballack and Lothar Matthäus, followers of fußball have had dozens of midfield maestros to enjoy in the modern era.

Today, there is another healthy dusting of high-calibre engine room operators strutting their stuff on the Bundesliga stage, and below we’ve picked out seven of the league’s current midfielders that are worth watching out for between now and the end of the 2019/20 season.

When you’re done here, we recommend checking out our list of 7 Bundesliga defenders to keep an eye on!

20-year-old Moussa Diaby joined Leverkusen from Paris St. Germain in the summer of 2019, becoming the latest blossoming French star to fly the nest in the capital in search of first team football.

After a relatively quiet first half of the season, Diaby’s involvement and performances spiked after the winter break, and the wide attacker has been racking up the goals and assists in impressive style since.

Diaby picked up where he left off before the COVID-19 led hiatus last week, bagging two assists in Bayer’s resounding 4-1 win at Werder Bremen, and the increasingly influential wonderkid will hope to make a similar impact when Leverkusen meet Borussia Monchengladbach in Saturday’s crucial contest.

The skilful Parisian is expected to feature heavily for Die Werself from here on in, and Diaby is already attracting covetous glances from clubs in the Premier League.

One of two brothers at Werder, Maximilian Eggestein is knocking on the door of Joachim Löw’s Germany squad thanks to his impressive all-round performances in midfield.

Bremen look like exiting the Bundesliga for the first time since 1980 this season, though Eggestein is unlikely to join them in the second tier.

The 23-year-old, who can be deployed centrally or from the right, has started 23 times for Werder in 2019/20, and Eggestein was part of the German team that made it to the final of last summer’s European U21 Championship.

Die Werderaner will need Eggestein to be at his best when Werder Bremen travel to play Freiburg this weekend.

Hoffenheim’s breakout star of 2020, the versatile 20-year-old has the flexibility to fill in out wide, behind the striker and even up front – though Baumgartner seems to impress wherever he finds himself on the pitch.

The promising Austrian has notched four goals in just 11 Bundesliga starts for Hoffenheim this term, and though he still features from the bench more often that he would like, Baumgartner is certain to be a regular before long.

Blessed with natural balance and a wonderful ability to beat his marker in one-on-one situations, the fleet-footed attacking midfielder has the tools to carve out a lengthy career at the top level.

Baumgartner will hope to be given another chance to shine when Hoffenheim make the trip to play bottom club Paderborn on Saturday.

Flying Kosovan winger has been exciting fans in Germany this season with his sparkling displays for Werder Bremen, notching 14 goal contributions (10 goals, four assists) in 24 in all competitions for the club since August.

The 23-year-old attacker, who can fill in right across the front line, seems destined for super stardom, though Bundesliga supporters should enjoy his unique dribbling skills while they can – a queue of major overseas clubs are already lining up to sign the Kosovan, who is valued at around £35m, and a summer move beckons.

Marco Rose’s rapidly rising Gladbach team have a lot of young talent to admire, and while midfielder Florian Neuhaus falls short of some of his counterparts in terms of current reputation, the 23-year-old’s standing improves with every accurate pass.

The intelligent playmaker has appeared 22 times for Die Fohlen in 2019/20, helping to drive his team’s quest for Champions League qualification with his clever distribution and reliability.

Neuhaus already has three goals and two assists in the bag for the year, though the five yellow cards he has collected suggests that he also has a keen competitive edge to his game.

Never shy of courting controversy off the pitch, Brekalo continues to develop at a rate of knots on it. The 21-year-old winger has been selected to start 13 times in the Bundesliga in 2019/20 by Die Wölfe, appearing a further nine times of the subs bench and hitting a credible three goals and four assists in total from the left flank.

The gifted Croatian, who was schooled at Dinamo Zagreb’s famed academy, has already won 11 senior caps for his country and has been involved in his nation’s international set up since he was 13.

Brekalo is the archetypal tricky winger with a low centre of gravity and quick feet, and the flanksman possesses the chicanery to leave defenders looking equal parts confused and embarrassed on a regular basis.

Wolfsburg host Borussia Dortmund at the Volkswagen Arena this weekend, in a high-profile clash that should offer Brekalo another platform to showcase his skills.

Having honed his skills as a young player on the same academy pitches as Ilkay Gundogan, Mesut Ozil and Julian Draxler – it should come as no surprise that Suat Serder looks a composite player built from pieces all three of those established stars.

The 23-year-old is already among Schalke’s most influential players, notching seven goals in 18 Bundesliga starts this season for David Wagner’s much improved Königsblauen team.

Serdar was born in Germany to parents of Turkish descent, but chose to represent the country of his birth at international level, making his Die Mannschaft debut against Argentina last year.