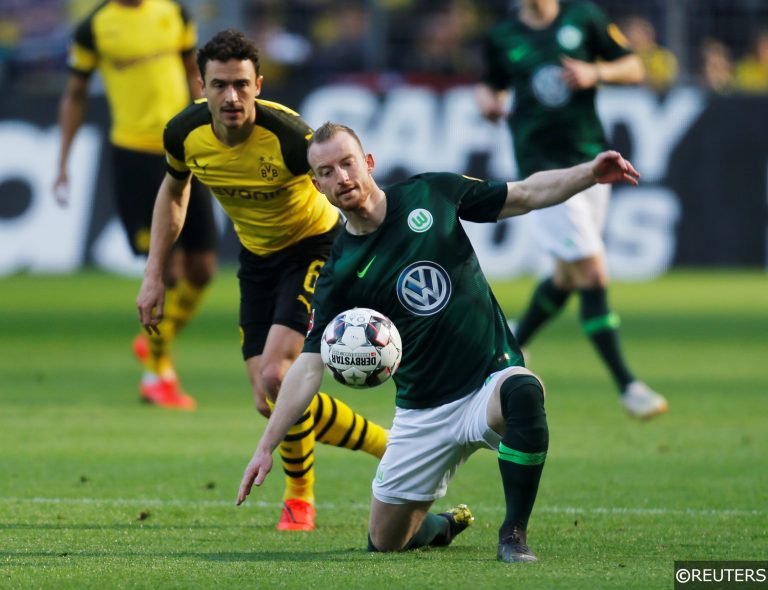 All eyes remain on the Bundesliga on Sunday as BT Sport broadcast a triple header of top flight German action, starting with the struggling Werder Bremen hosting Wolfsburg at 12:30pm.

This is swiftly followed by a trip to Berlin for a 2:30pm kickoff as Schalke look to arrest their downward spiral against a Union Berlin side hoping to put some distance between themselves and the relegation zone.

Finally, it’s a mid-table clash between Augsburg and Cologne at 5:30pm, and with both sides seeing plenty of action in front of goal this is expected to be one for the neutrals.

We’ve taken a look at the betting odds, team news and predicted lineups for all three fixtures to make sure you’re informed before the action kicks off. Remember, you can also check out all our Bundesliga predictions for the weekend here.

How to watch Sunday’s Bundesliga fixtures

All three of Sunday’s Bundesliga matches are being broadcast live on BT Sport 1, but if you don’t have a BT Sport subscription you can still tune in!

bet365’s live streaming service covers all three Bundesliga games on Sunday. All you need is either a funded bet365 account or to have placed a bet in the last 24 hours. You can sign up below to take advantage of their excellent streaming service.

Werder Bremen looked to have turned a corner during the coronavirus-enforced break, but midweek saw their dreadful home record come back to haunt them as they lost 3-0 to an out of form Eintracht Frankfurt side.

Die Werderaner, who are currently 17th in the table and three points off safety, have picked up just six points at the Weser-Stadion and haven’t won there since the start of September.

Wolfsburg also lost last time out, but they’re still in a good position to qualify for the Europa League next season and with four wins from their last five away games they’ll be feeling good about their chances on Sunday.

Leonardo Bittencourt will be looking for his third goal since the Bundesliga restart as he lines up alongside Milot Rashica and Davie Selke as part of a three-man attack.

Marco Friedl could miss out on a starting berth as Ludwig Augustinsson takes the left back slot, while Nuri Sahin has been sidelined for the remainder of the season due to a hip injury. He joins Mohwald and Pizarro on the absentee list.

Captain Joshua Guilavogui is back in training after recovering from an ankle injury but he’s unlikely to be ready for a return to action just yet. Yannick Gerhardt is expected to start at left back, with Paulo Otavio and Jerome Roussilon both struggling with injuries.

Up front Wout Weghorst will lead the line in front of Josip Brekalo, but midfielder Renato Steffen will have to sit this one out after picking up a suspension.

You can find all our detailed analysis for this matchup on our Werder Bremen vs Wolfsburg predictions here.

Both Union Berlin and Schalke come into this match in a rough patch of form. Neither side have won since the return of the Bundesliga, although Union Berlin can at least point towards a pretty tough fixture list which included games against Bayern Munich, Borussia Monchengladbach and a resurgent Hertha Berlin.

Schalke did return to action with a difficult trip to arch-rivals Borussia Dortmund, but they have since lost to Augsburg, Fortuna Dusseldorf and Werder Bremen and need some way of arresting their downward slide.

Key midfielder Robert Andrich returns from suspension for Union Berlin and will slot straight back in to a central midfield berth. Top scorer Sebastian Andersson will once again lead the line after scoring his first goal since the return last weekend, with Marius Bulter playing behind him after making his loan at Union Berlin permanent.

Sebastian Polter will play no part after being suspended by the club after refusing to take a pay cut, while Julian Ryerson is out for the season with a knee injury. Yunus Malli is available to play again after recovering from his positive coronavirus test.

Schalke can blame part of their recent disappointment on their bulging injury list, with their midfield particularly hit by injuries. Omar Mascarell and Suat Serdar are both sidelined, and Weston McKennie is suspended.

Jean-Clair Todibo has also been ruled out with an ankle injury, which means a rare start for Nassim Boujellab could be in order. Benjamin Stambouli is nearing a return to action but isn’t expected to be fit for Sunday.

You can find all our detailed analysis for this matchup on our Union Berlin vs Schalke predictions here.

Augsburg and Cologne sit 13th and 12th in the Bundesliga table respectively and the gap of just three points reflects the tightness of this fixture. There has been little to separate these sides all season, although Augsburg have managed to pick up double the points of Cologne since the restart.

Both teams are perilously close to the relegation battle, with Augsburg just four points above the relegation playoff position and Cologne looking nervously over their shoulder as their winless streak stretches on. In any case, with 26 goals scored in these teams’ combined eight fixtures since the restart, this could be an extremely entertaining affair.

Raphael Framberger is expected to return to the right back spot, leaving no room for Lichsteiner after his appearances against Hertha Berlin. Phillip Max is expected back on the left side of defence too, but Tin Jedvaj could hold on to his place in defence despite Jeffrey Gouweleeuw’s return.

Daniel Baier could return to the lineup after being rested last week, while Alfred Finnbogason is nearing a comeback after his knee injury layoff. Simon Asta, however, is ruled out for the season with a torn ACL.

Top scorer Jhon Cordoba will lead the line despite being substituted last week as a precaution, pushing Anthony Modeste back to the bench. Mark Uth, however, is a serious doubt for the Billy Goats and could be replaced by Elvis Rexhbecaj on Sunday.

Sebastian Bornauw is still suspended, paving the way for Rafael Czichos to return to the back line and partner up with Toni Leistner. Dominick Drexler is another selection problem after picking up his fifth booking last time out.

You can find all our detailed analysis for this matchup on our Augsburg vs Cologne predictions here.

What football is on this week?