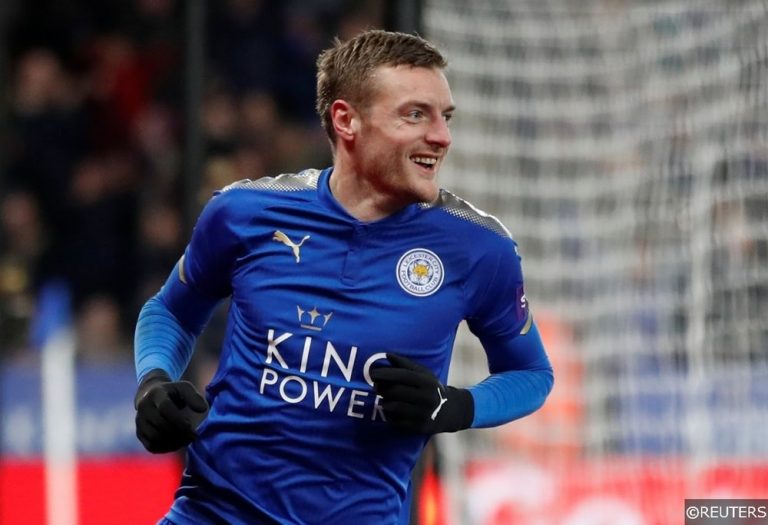 The 2019/20 Premier League season resumes in less than two weeks’ time and running alongside the battle for crucial points and places, the race to finish as the division’s leading marksman promises to be just as intense.

With around a third of the campaign left to contest, the Premier League’s lengthy list of goal-getters and match-winners will be gearing up to launch a late charge to land the Golden Boot ahead of their rivals.

In 2019, that individual accolade was shared by Arsenal’s Pierre-Emerick Aubameyang and Liverpool duo Sadio Mane and Mohamed Salah – and all three superstars are in the running to be crowned the Premier League’s leading marksman again this year.

That trio won’t have it all their own way however and they are joined in the hunt for glory by a clutch of equally threatening competitors.

Remember – we’ll be covering all the action with match previews and tips on our Premier League predictions page. 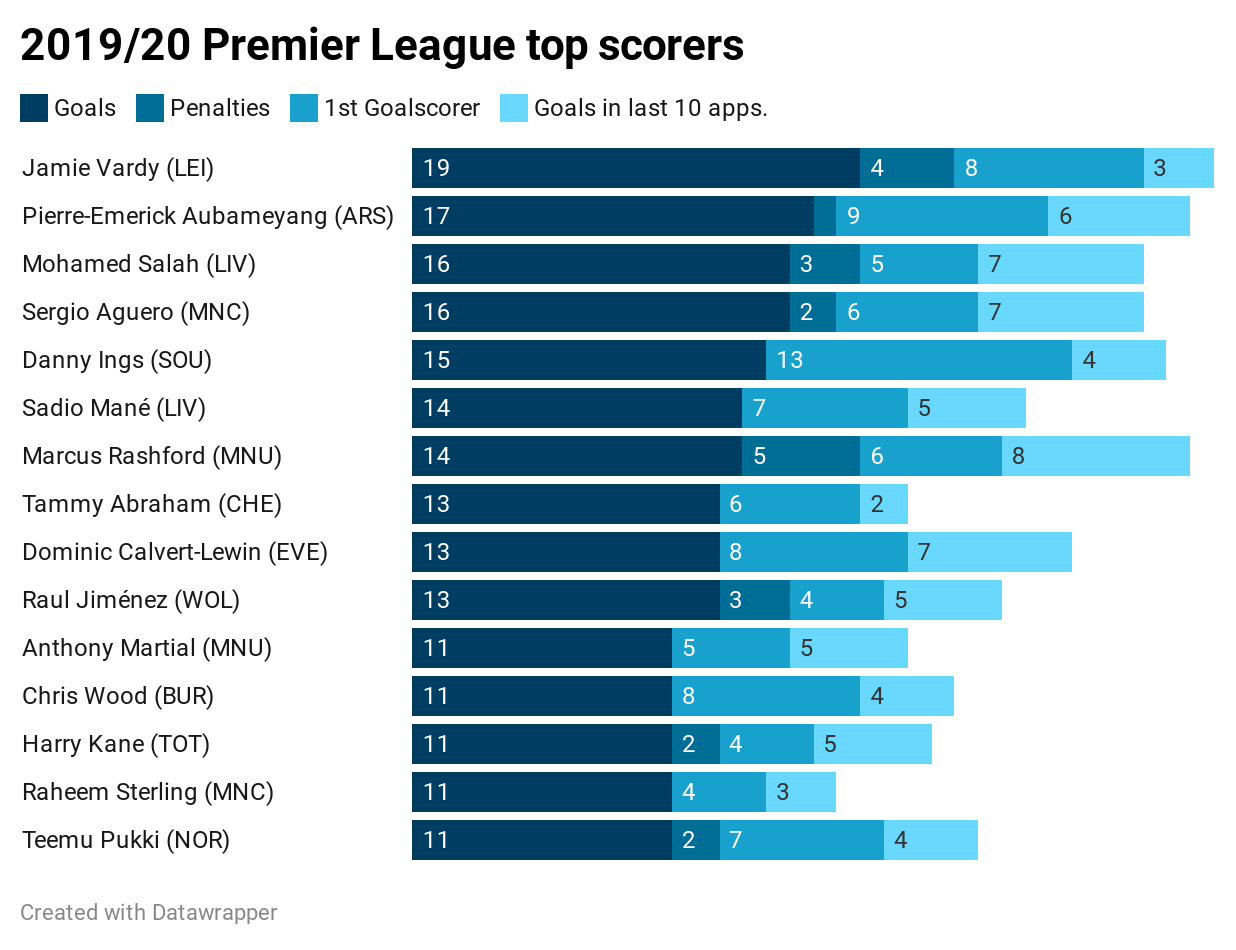 Veteran Leicester City talisman Jamie Vardy is currently out on his own as the Premier League’s top scorer with 19 goals – a total that puts him two clear of his nearest challenger Pierre Emerick-Aubameyang.

The 33-year-old, whose career best tally for a Premier League season was 24 back in the Foxes’ title winning season in 2015/16, has never won the Golden Boot before, though that could all change by the end of the summer.

However, worryingly for Vardy, his form in the run up to the league’s postponement was cold. The striker scored just three times in 10 appearances prior to the hiatus, and Vardy will need to improve on that output fast to keep his place at the top of the charts when play resumes.

While his future with Arsenal remains uncertain, Pierre-Emerick Aubameyang’s goal-scoring prowess hasn’t diminished amid the rumours of a possible Emirates departure.

The expert poacher’s 17-goal tally this season hasn’t been supplemented by penalty kicks – something that few players among the division’s leading scorers can claim.

The 30-year-old Gabon international notched at least 20 league goals in each of his last four campaigns and is well on course to push through that ceiling again in 2019/20.

Egyptian superstar Mohamed Salah hasn’t quite been at his sparkling best this season, though the fact that the 27-year-old is still well on his way to bagging over 20 Premier League goals is testament to his incredible natural ability.

The Liverpool wide-attacker’s form did seem to be spiking in quality in the weeks leading up to the campaign’s temporary suspension however, and Salah had scored seven times in 10 league appearances before play was stopped.

The Reds are potentially just two wins away from sealing their first domestic crown in 30 years, and if they dot the i’s and cross the t’s in good time, their players’ motivation to finish the rest of their fixture programme strongly could ebb.

Explosive Argentine frontman Sergio Aguero passed the 20-goal mark in six of the eight full seasons he’s represented Manchester City in the Premier League, though the ex-Atletico star’s 2014/15 Golden Boot remains his only top scorer award during his time in England.

Aguero, who turned 32 on June 2, is lurking dangerously on 16 goals for the current campaign, however, with City’s title defence in tatters, the club’s focus will be firmly tuned towards success on the continental stage.

City’s desperation to win the Champions League could see them taking their foot off the pedal in the Premier League somewhat, and the ageing Aguero could be one player that is rested more often that he would have liked, thus reducing his Golden Boot winning chances.

Before a stress fracture to his back threatened to completely end his 2019/20 campaign, Manchester United starlet Marcus Rashford was in scintillating form, netting eight times in 10 Premier League appearances before injury halted his streak.

The 22-year-old used the three-month domestic football layoff to regain full fitness however, and Rashford returned to training with his teammates at Carrington last week.

The United academy graduate shares his comeback from injury with French World Cup winner Paul Pogba, and both of those key returnees have yet to share a pitch with Portuguese maestro Bruno Fernandes.

The fresh supply lines opened by that pair of creative midfielders should ensure that Rashford won’t be short on chances to add to his 14 Premier League goal haul before the end of the season.

Worth keeping an eye on

While Danny Ings chances of upsetting the established order at the top of the Premier League marksman charts while playing in a low-scoring Southampton outfit in 2019/20 might be slim, the 27-year-old remains one of the best performers in another key metric.

Amazingly, 13 of the 15 goals plundered by Ings in England’s top tier this term have been Southampton’s first goal of the game. That makes a full 86% of his goals this season the Saints’ first strikes in their matches so far this term.

On six separate occasions Ings scored the first goal overall in the respective fixture he played in, while the striker scored Southampton’s only goal an equally remarkable nine times.

Ings’ incredible importance to Southampton makes him a cracking candidate for two goalscoring markets between now and the end of the campaign – the anytime, and in particular the first goalscorer market, where Ings is the deadlock breaking king.

The Premier League is back! Here are the biggest games to look forward to