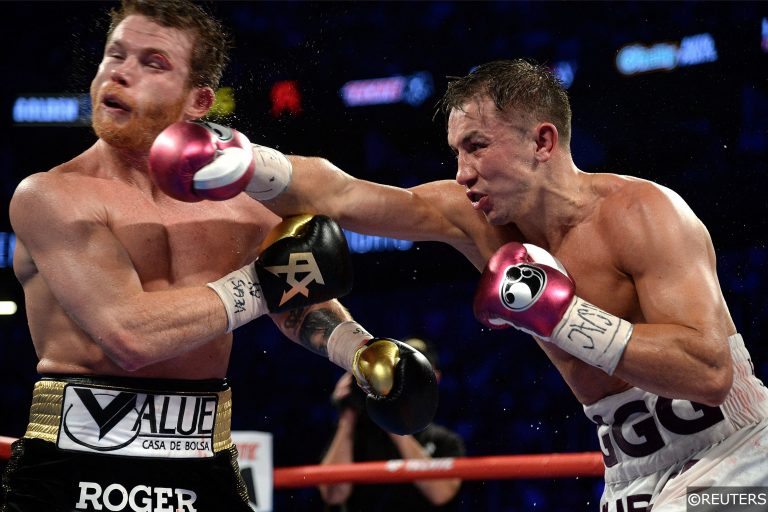 Saul ‘Canelo’ Alvarez and Gennady Golovkin meet for a third time this weekend at the T-Mobile Arena in Las Vegas, Nevada.

The first fight in 2017 ended as a draw and Canelo won the second meeting via a majority decision in what was an extremely close fight, with many pundits feeling GGG should have been awarded a victory.

Saturday’s trilogy fight should settle this incredible rivalry once and for all and we’ve got the big fight covered, as well as a 16/1 accumulator for the undercard and details of how to watch Saturday’s main event.

Where to watch Canelo vs Golovkin III

This fight, billed as The Trilogy, will take place at the T-Mobile Arena in Las Vegas, Nevada – the same venue as the first two meetings.

The fight will be shown on DAZN and viewers in the UK can watch Alvarez vs Golovkin III live on DAZN PPV via the DAZN app, which is available for download onto your mobile, tablet device and Smart TV, at a cost of £9.99 on top of a DAZN subscription.

Ring walks for the headline event are expected to begin at around 4.30am on Sunday 18 September.

Who is on the Canelo vs GGG III undercard?

The record may read 1-0 to Canelo after two fights so far but GGG can count himself unlucky not to have won at least one of those. The Kazakh probably did enough to win the first clash, albeit a draw wasn’t necessarily an unfair decision either, and he landed more punches in the second but ended up losing on points.

However, Golovkin is now 40 and has fought just four times since his defeat to Alvarez, while the Mexican has had eight outings in the intervening years and has faced a higher standard of opponent. Canelo, 32, did lose to Dmitrii Bivol in his last outing earlier this year but that was at light heavyweight and he was simply unable to make inroads against a bigger man, who used his size and power advantage to secure what was ultimately a one-sided victory.

As neither man has ever been stopped the 8/13 on this fight to go the distance looks too good to ignore for a main bet. GGG has never even been knocked down in nearly 400 fights (350 as an amateur, 44 as a professional) and Canelo never looked in any danger of being knocked down against Bivol.

If the fight does go the full distance, Canelo looks the most likely victor as he did outland GGG in terms of power punches in the last meeting and the Mexican is the more likely of the two to connect with eye-catching shots, so backing Alvarez to win via decision or technical decision is an alternative option at a bigger price – and is the selection that will be used on our boxing accumulator to add a bit more value to that bet.

Diego Pacheco to win by KO, TKO or Disqualification vs Enrique Collazo

Matchroom’s Diego Pacheco will fight for his first pro title as he comes up against Enrique Collazo for the WBC USNBC Silver Super-Middleweight and the 21-year-old should be able to get the job done inside the distance. Pacheco has won all 15 of his fights so far and 11 of those wins have come inside the distance, including each of his last four. Collazo is probably the best opponent he will have faced but he should still be able to win without needing the judges.

Austin ‘Ammo’ Williams is an explosive middleweight with nine of his 11 wins coming inside the distance but British hopeful Kieron Conway can provide him with a real test on Saturday. Conway has never been stopped in a 21-fight career and of these two boxers he has arguably the better CV. This match-up looks closer than the odds suggest and over 8.5 rounds looks a good option.

This is a big call as Jesse ‘Bam’ Rodriguez is the heavy favourite and is widely expected to overcome Israel Gonzalez with a stoppage. Rodriguez has won 11 of his 16 fights inside the distance and stopped Wisaksil Wangek in the first defence of his WBC super flyweight strap, but Gonzalez is a solid performer who has never been stopped so the big price on Bam to win on points appeals.

Canelo to win by Decision or Technical Decision vs Gennady Golovkin

In The Mixer: Will Graham Potter be a success at Chelsea?