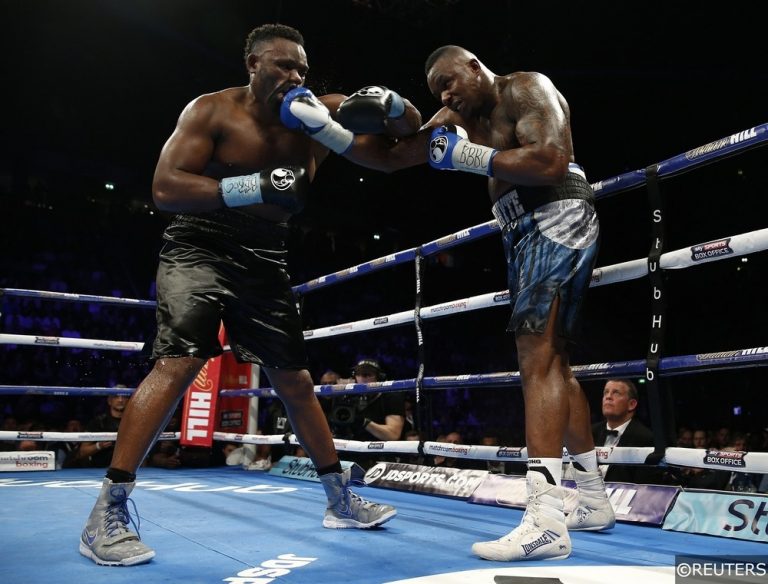 Dereck Chisora returns to the ring on Saturday night at the O2 Arena in London as he takes on fellow veteran Kubrat Pulev in a rematch.

Chisora goes into the clash on the back of three losses after losing out on points to Oleksandr Usyk in the Ukrainian’s second heavyweight fight, before back-to-back points losses to former WBO champion Joseph Parker.

Pulev has lost just twice in a 31-fight career but he has only fought once since being stopped in the ninth round by Anthony Joshua in December 2020, claiming a routine points win over Jerry Forrest earlier this year.

We’ve got the main event covered and also have a 14/1 accumulator covering the undercard, which you can back below.

Where to watch Dereck Chisora vs Kubrat Pulev

The bout will be broadcast live on the DAZN app – the streaming subscription service that costs £7.99 per month for viewers in the UK. The app can be viewed on smart TVs, game consoles, mobiles, tablets and computers.

Who is on the Dereck Chisora vs Kubrat Pulev undercard?

Pulev is rated as the favourite at 4/11 to win the fight, while Chisora is a 2/1 chance.

In the method of victory market, a Pulev win by KO, TKO or Disqualification is 2/1 and a decision or technical decision victory for the Bulgarian is 11/8.

I’d love to predict a win for Chisora here but I’m finding it hard to look beyond Pulev. When the duo met in 2016, Pulev was awarded a split decision victory but, in truth, that result perhaps flattered Chisora and Pulev was unlucky not to be handed a unanimous decision win.

Since then, both of these fighters have put a few more miles on the clock but I’m expecting the same result again, with Pulev winning on points.

Chisora has always been an explosive heavyweight but at 38 he no longer has the ability to come up with those moments in the later rounds and if Pulev can avoid getting drawn into a war in the early exchanges I would expect him to ultimately claim the win. At 41, the Bulgarian’s best years are also behind him but he still has plenty of ringcraft and can record another win this weekend.

Pulev has only stopped one of his six opponents since 2017 though, and the only men to beat Chisora inside the distance are David Haye, Tyson Fury and Dillian Whyte so the Cobra may need the judges to get the win.

Fabio Wardley to win by KO, TKO or Disqualification vs Kingsley Ibeh

British heavyweight Fabio Wardley takes on American Kingsley Ibeh in a fight scheduled for eight rounds, but one that is unlikely to go the distance.

Wardley has a perfect record with 13 wins from as many fights, with 12 of those coming inside the distance. Wardley went the full four rounds on his debut and has stopped all of his opponents since, and only once has he been taken beyond the fifth round.

Ibeh has a 7-2 record and six of his wins have been stoppages, as has one of his defeats. Wardley looks a real prospect – and he should be able to get the job done early on Saturday.

Felix Cash is unbeaten after 15 fights and 10 of those have been stoppage wins but he might need the help of the judges against experienced American Vaughn Alexander.

Alexander has six defeats and one draw in a 24 fight career but he has only been stopped once. The 36-year-old is a bit of a knockout specialist himself with 10 of his 17 wins coming inside the distance, including two first round knockouts. As such, Cash will probably attempt to avoid getting drawn into a full on war but he has the quality to box at range and claim a win on points regardless.

Israil Madrimov to win by KO, TKO or Disqualification vs Michel Soro

Israil Madrimov has only had eight professional fights but the Uzbeki fighter is already becoming a big name. Madrimov has managed six stoppage wins and remains unbeaten, and he stopped Michel Soro in the ninth round when these two fighters met in December.

Soro is a former world title challenger and deserves plenty of respect, but Madrimov should still have the power to get the job done early and he can record another win inside the distance at the O2 Arena.