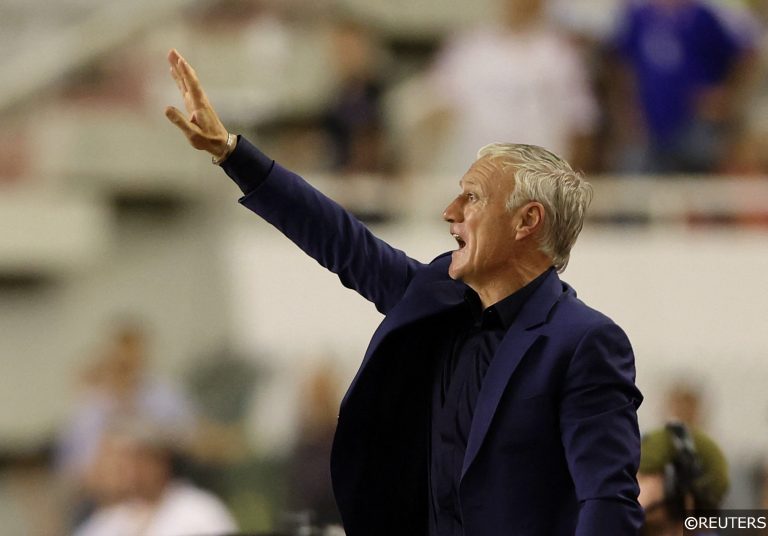 After comfortable wins over Senegal and Poland respectively, old foes England and France face off in a competitive match for the first time since Euro 2012 this Saturday as they battle for a place in the World Cup semi-finals.

Of course, we have a full England vs France preview here, but in anticipation of this huge clash I’ve delved into all the player specials markets to build a gigantic Bet Builder!

Kylian Mbappe stands out like a sore thumb in the goalscorers market after a sensational display against Poland. He scored a brace in that game and added an assist to take his tally to five goals in three starts this World Cup. He will be a huge threat for England to deal with, but by no means the only one. Olivier Giroud broke France’s all-time leading goalscoring record in their last-16 tie and has three goals from three starts.

England have attacking talent in spades, too. Bukayo Saka scored his third goal of the World Cup against Senegal and will be a big threat for the Three Lions, while captain Harry Kane opened his account in that game and has 20 goals in his last 28 appearances for his country.

Harry Kane pops up again here, with the Tottenham man leading the World Cup assist charts with three, making him ideal to back in the “To score or assist” market. Phil Foden may be a better option in the outright assist market, though, after laying on two goals in just 174 minutes of action. Gareth Southgate opted to start the Manchester City youngster and is unlikely to change things after such an excellent performance.

Kylian Mbappe is another repeat appearance. He has assisted twice for France so far, turning provider for Giroud on both occasions and having 34 shot-creating actions so far, more than any other player at the World Cup. Antoine Griezmann (22) is behind only Mbappe (34) and Messi (25) in shot-creating actions and is worth considering, too.

On the other side of the English Channel, Les Bleus forward Ousmane Dembele is 8/11 despite having tested the keeper in each of his last two appearances, including one against Tunisia despite only being on the pitch for 12 minutes.

England are yet to receive a single booking in the World Cup but that could all change when Kylian Mbappe comes running at them. Mbappe has been fouled five times this tournament and England’s full-backs – Luke Shaw, Kyle Walker and Kieran Trippier – have committed nine fouls in total. Walker is the likely selection to try and stop Mbappe and he looks a good price to be shown a card at 7/2.

On France’s side, Aurelien Tchouameni has committed the second-most fouls in the squad and been booked once already. Should he earn a starting berth, Eduardo Camavinga is a potential option, too, after committing five fouls in his single appearances for Didier Deschamps’ team.