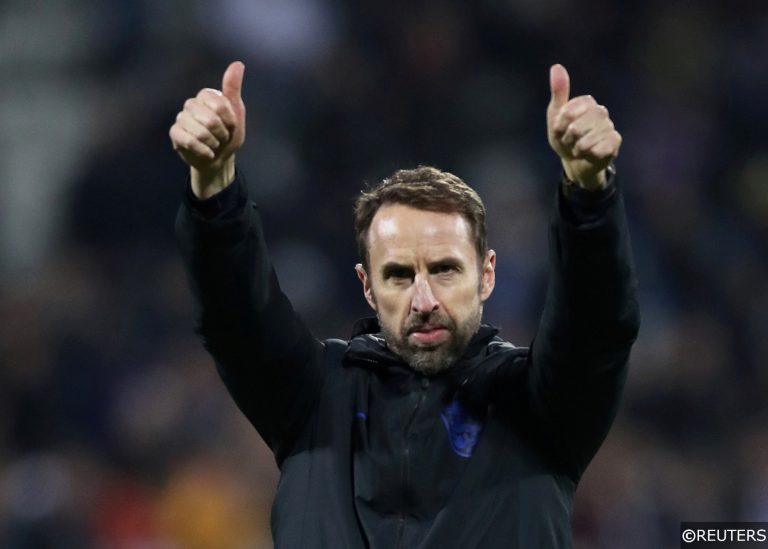 England have taken early control of Group I thanks to successive victories over San Marino and Albania, though the Three Lions face an acid test of their table-topping aspirations on Wednesday when a strong Poland team visit Wembley Stadium.

This week’s World Cup qualification showdown should have viewers on the edge of their living room seats, and as such, it’s an ideal fixture to build bets and multi-part selections around.

With that in mind, we’ve put together a handy bet builder guide for those of you planning to tune in to England vs Poland on Wednesday. Plus – we’ve combined our picks into one huge 168/1 bet builder which you can back below.

You can find the rest of our predictions and analysis for the day’s other fixtures on our football tips page.

England have turned Wembley Stadium into a real fortress in recent years, and their run of 12 wins from their last 13 matches in London has been impressively consistent.

Poland were dealt a major blow in the lead-up to Wednesday’s game when talismanic centre-forward Robert Lewandowski was ruled out with a slight knee injury, and the Bayern Munich man’s absence hands England a major advantage this week.

The Three Lions were already favourites to triumph, though their chances have heightened considerably now that Lewandowski is sidelined.

With Lewandowski in the treatment room, there is a gaping hole at the sharp end of Poland’s attack, though their team won’t be entirely without attacking threat when they travel to the English capital this week.

The Eagles aren’t quite the one-man team they are often made out to be, and just five of their last 18 goals were notched by Robert Lewandowski.

In Arkadiusz Milik, Krzysztof Piątek, Piotr Zieliński and Kamil Grosicki, Poland have several operators that can chip in with goals, so expect Poland to impact the scoresheet this week.

With Poland – who have notched in 11 of their last 14 matches – likely to register at Wembley, England will need to score at least twice to gather the points, and the Three Lions have sufficient firepower to do just that.

Gareth Southgate’s free-scoring side have plundered 44 goals in their last 13 home matches, which works out at an eye-watering 3.38 goals per 90 minutes, and they have the personnel to cut loose again on Wednesday.

Southgate’s England have regular goal-getters in just about every department. Unsurprisingly, their superstar striker Harry Kane is the bookmakers’ favourite to get his name in lights against Poland, but bettors are advised to look elsewhere for anytime scorers with more favourable odds.

Chelsea’s Mason Mount (2/1) – who found the net in Albania – is developing a knack for hitting the net at international level, while a confident again Jesse Lingard (7/4) is also one to watch.

However, Manchester City winger Raheem Sterling caught our eye the most at 13/10. The 26-year-old has bagged six goals in his last nine starts for England, and his pace and penetration runs from wide positions should threaten the Polish defence this week.

Midfield schemers Phil Foden and Mason Mount carry a significant goal-threat from deep positions, and both talented technicians are averaging close to 2.0 attempts on goal per game for club and country this term.

Around half of those efforts have hit the target, and both players are worth including in your bet builder to test Polish keeper Wojciech Szczesny at least once with a strike on Wednesday, at slightly better odds than some of their teammates.

For Poland, Marseille hitman Arkadiusz Milik is your go-to guy in the market. The 27-year-old mustered five attempts combined against Hungary and Andorra, and with Lewandowski out, Milik will shoulder extra responsibly up front.

England and Poland are comfortably the two strongest teams in Group I, and Wednesday’s fixture at Wembley is expected to be a hugely competitive skirmish between two sides aiming to be top dogs.

The Three Lions have collected just three cards in two qualification matches so far, while Poland have picked up only two bookings in their first pair of group games – however, intensity levels are certain to be cranked up a few levels in London.

Expect to see plenty of pressing, tackling and counter-attacks stopped with no-nonsense methods this week, and the foul and subsequent card count should be high as a result.

The midfield battleground is where we anticipate most of the action developing on Wednesday, and two Polish players fully familiar with the cut and thrust of English football are your prime candidates to pick up a booking.

Former WBA anchorman and current Lokomotiv Moscow hardman Grzegorz Krychowiak has already been cautioned nine times for club and country this season, and the 31-year-old defensive screen will have plenty of work to get through at Wembley.

His midfield counterpart, Kamil Jozwiak, has been putting his foot with regularity for Championship outfit Derby County this term, and the 22-year-old has been carded seven times in total for the Rams and Poland.

You can combine all of our tips into one bet builder using the Betfair banner below.