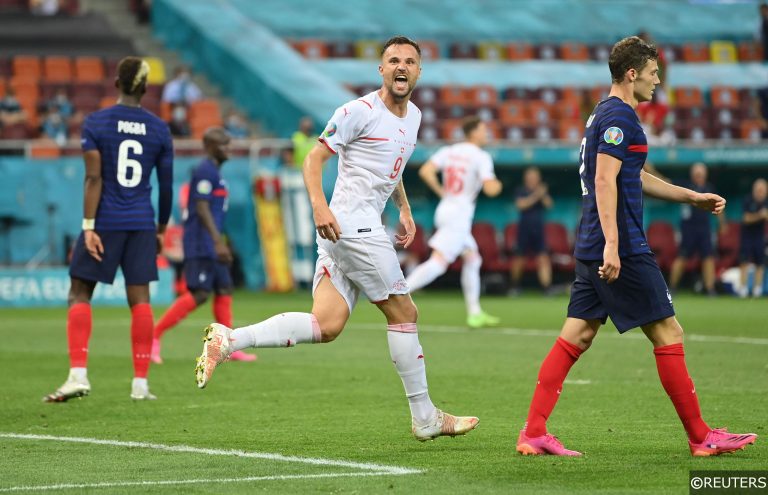 With the four Euro 2020 quarter-finals set to be played across Friday and Saturday, it is time to dive into some markets which tend to go overlooked.

We’ve had a run through the cards and corners data in Euro 2020 and we’ve picked out a best bet for the weekend and an 8/1 accumulator across the four matches. You can see all of our selections below.

Spain and Switzerland square-up in Friday’s opening quarter-final tie in St Petersburg, and La Roja look a good bet to rack up at least six corners.

The pair met twice in the Nations League last year and Spain forced 18 corners over the two encounters.

Spain have had 26 corners during their first four matches, while the Swiss have conceded 14 over their last two games against Turkey and France.

Luis Enrique’s side are going to dominate the ball while Switzerland attempt to soak up the pressure and that should see La Roja land over 5.5 Spain corners at 8-13 with bet365.

Goals are likely to be at a premium in Friday’s second quarter-final between Belgium and Italy and with few chances being created, there may not be many corners.

All four of Belgium’s matches at Euro 2020 have featured six corners or fewer and they failed to register any in their 1-0 win over Portugal, who had only three themselves.

Italy’s extra-time win over Austria featured only seven across the 120 minutes, while their group meetings with Wales (eight) and Switzerland (five) also went under the total on offer.

This is one of the biggest matches in the recent history of both Czech Republic and Denmark and, with a semi-final spot at Euro 2020 up for grabs, tensions could be running high.

The Danes have great attacking talent in their ranks and their energetic approach could draw plenty of fouls from the their Czech counterparts.

It is also interesting to note that referee Bjorn Kuipers has taken charge of two matches at Euro 2020 – Denmark v Belgium and Slovakia v Spain – and he gave four yellows on each occasion. Take over 1.5 Czech cards at 8-13.

Ukraine have conceded 25 corners across their four games at Euro 2020, which is an average of 6.25 per outing, and a quarter-final clash with England should see the trend continue.

This is without doubt Ukraine’s toughest test of the competition and England’s greater attacking presence should put them under intense pressure.

The Three Lions forced six corners in group games with Scotland and Czech Republic and should repeat the trick against Ukraine, who will have to defend resolutely. It is even-money with bet365 that England take over 5.5 corners.

Best value single – Sergio Busquets to be shown a card

Spain’s defensive-minded midfielder Sergio Busquets is not one to shy away from a challenge and his role will be extremely important as Switzerland attempt to break on the counter-attack.

Busquets has started only twice at Euro 2020 but was booked in his first appearance against Slovakia and was very fortunate not to get another yellow card against Croatia last time out.

The 32-year-old collected nine yellow cards in 32 La Liga appearances for Barcelona this season and at 13-5 he looks great value for another card.