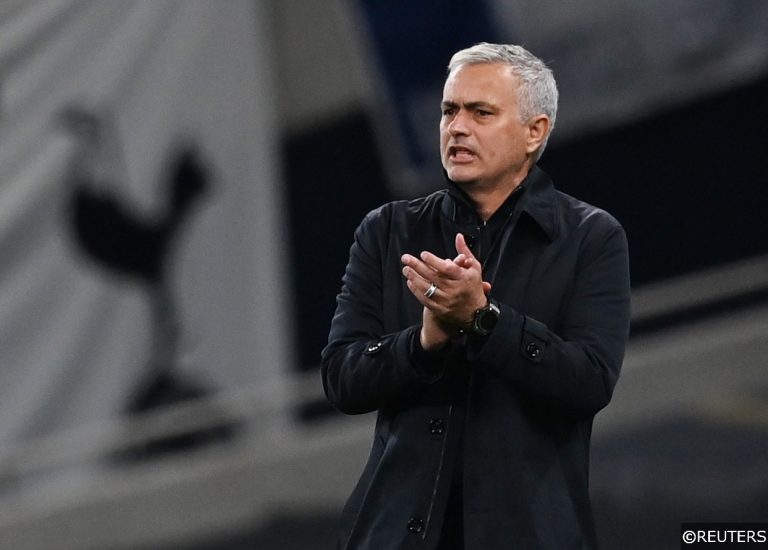 Defending Premier League champions Liverpool travel south amid talk of slipping crowns and standards on Thursday, where a Tottenham team with a ruthless edge led by regular Reds antagonist Jose Mourinho look ready to pounce in the capital.

After a disappointing and injury hit end to 2020, the New Year has brought new problems for Jurgen Klopp in the form of a crisis of confidence. With the club’s unbeaten record at Anfield ended by Burnley and their FA Cup aspirations ended by rivals Man Utd, Liverpool have never looked more vulnerable.

To get you in the mood for what should be a gripping encounter in North London, we’ve put together a massive x/1 #OddsOnThat selection for the game.

Check out our Tottenham Hotspur vs Liverpool predictions for more free betting tips ahead of kickoff.

With just two wins from nine away games in the Premier League this season, Liverpool have been abject on their travels in 2020/21. The usually formidable Reds have struggled to find their flow on the road this term and their inability to perform as the visiting team has seen them drop out of the league’s top four.

Tottenham, meanwhile, are unbeaten in eight games in all competitions and with bookmakers slow to match their prices to Liverpool’s regression, Spurs look superb value in the double chance market this week.

Six of the last seven Premier League tussles between Spurs and Liverpool produced goals at both ends, including the teams’ clash at Anfield back in December, and we expect more of the same on Thursday.

Clean sheets away from Anfield have been rare occurrences for the Reds this season, and their problems can be traced as far back as February last year. Liverpool have secured shutouts in just four of their last 15 Premier League away tests and Tottenham have the attacking class to threaten the Merseysiders’ injury-hit backline again on Thursday.

Keeping Liverpool out at the opposite end could prove a tough task for a Spurs team that carries an uninspiring record of one clean sheet in seven top flight fixtures into this week’s showpiece showdown.

Harry Kane missed a gilt-edged opportunity to give Spurs the lead in their eventual defeat at Anfield last year, but we’re backing the England international to make amends in Thursday’s do-over.

Kane is in red-hot form right now with three goals in his last three top flight appearances, and the prolific 27-year-old will be rubbing his hands at the prospect of facing a Liverpool defence lacking star players and self-belief.

Mohamed Salah looked razor sharp in Liverpool’s FA Cup defeat to Man Utd and the attacker’s brace at Old Trafford offered the Reds a shred of positivity on an otherwise gloomy day.

Even when he’s not scoring, Salah carries a huge amount of attacking threat into Liverpool’s games, averaging more attempts per 90 minutes (3.3) than any of his Reds’ teammates in 2020/21. He also has the joint highest shots on target average in the Premier League this season, and we’re backing Salah to test Hugo Lloris with at least a couple of raspers on Thursday.

Fabinho & Pierre-Emile Hojbjerg to get booked

Stand in centre-half Fabinho has been performing his defensive duties manfully for Liverpool during his team’s selection crisis, though the Brazilian has been tackling his way into trouble of late.

The 27-year-old picked up a booking in each of this last three appearances for the Reds and is a prime candidate to draw unwanted attention from the officials when he lines up against Harry Kane on Thursday.

Similarly, Spurs enforcer Pierre-Emile Hojbjerg won’t be far away from the action when the midfield skirmishes break out in North London. The Dane has already been carded seven times for club and country this term, including when these two sides met before Christmas.