FST’s 17/2 #OddsOnThat for Netherlands vs Spain 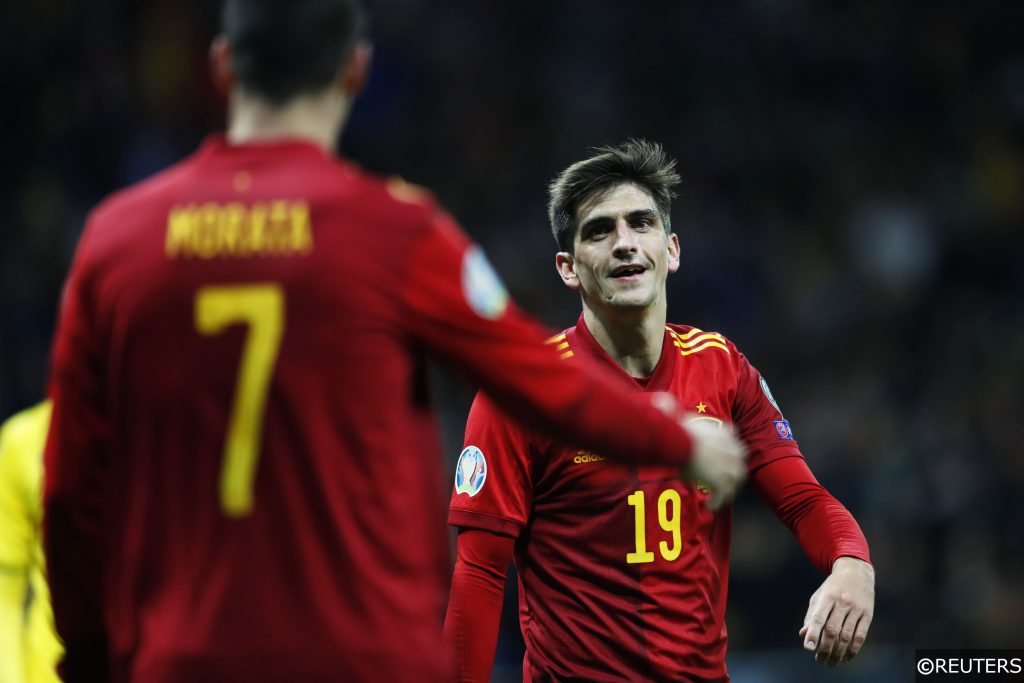 From Nigel de Jong’s kung-fu kick on Xabi Alonso in 2010 to Robin van Persie’s incredible diving header in 2014, games between the Netherlands and Spain have produced some of football’s most iconic moments over the years.

The Oranje and La Roja will pen the latest chapter of their long-spanning rivalry in Amsterdam on Wednesday evening, where former Barcelona teammates -Frank de Boer and Luis Enrique – pit their tactical wits against each other from opposing dugouts.

Ahead of what promises to be an intriguing evening of international action, we’ve put together a cracking looking 17/2 #OddsOnThat special with Betfair for the Netherlands clash with Spain.

Check out our selection below! You can find a more detailed analysis of the game, alongside our expert’s betting tips for the match in our Netherlands vs Spain predictions.

If you’ve not yet signed up to Betfair, you can use the banner below to get £20 in free bets if you bet £5 or more!

FST’s #OddsOnThat for Netherlands vs Spain

Netherlands have made a somewhat uninspiring start to life under Frank de Boer’s stewardship. The Dutch outfit failed to win any of their new manager’s first three games in charge, while their haul of just one goal from the same trio of fixtures was a dismal return for a team littered with talented operators.

Defensively, there have been positives to take for the Oranje however, and in a run stretching back beyond de Boer’s appointment, the Netherlands shipped a total of just three goals in seven assignments.

Spain – who saw under 2.5 goals scored in six of their last nine matches – are far from prolific under Luis Enrique either, and it’s worth noting that La Roja’s last five tests on the road averaged just 1.4 goals per 90 minutes.

Friday’s friendly between the Netherlands and Spain has all the makings of a chess-like tactical battle, and that in turn should ensure that goals are thin on the ground once again.

Real Sociedad captain Mikel Oyarzabal was named La Liga’s player of the month for October following a string of superb displays for the division’s early pace setters, and the 23-year-old will be out to add to his swelling reputation when he represents his country in Amsterdam.

With five goals and two assists in his last seven games for La Real, Oyarzabal has been leading by example at club level, and his 2.85 attempts on goal per appearance average highlights just how threatening he has been in the final third.

On the opposite side of the dividing line, Memphis Depay remains the Netherland’s talisman and his team’s most potent attacking weapon. With 10 goals in his last 18 run outs for his country, the Lyon star’s output has been unparalleled, and the set-piece specialist averaged a whopping 4.3 attempts per game in his last three appearances for Holland.

While both teams will be keen to perform and win in Amsterdam this week, we expect the friendly contest to lack the aggressive edge that a competitive fixture would likely have.

With avoiding injuries and suspensions ahead of more pressing matches a priority for both de Boer and Enrique, challenges are expected to be light and tackles carefully considered on Wednesday evening.

When Netherlands and Spain last met for a friendly encounter in 2015, there were zero cards handed out by Scottish referee William Collum, and their latest exhibition meeting in the Dutch capital should be similarly tepid.

As we touched on above, many of the Netherlands’ recent fixtures have been low on penalty area drama, and as a result, a good chunk of their games have been level at half time.

Four of the Oranje’s last five matches in fact, against Poland, Mexico, Bosnia-Herzegovina and Italy, were all square at the interval, and in what should prove to be a tight tussle with Spain on Wednesday, a similar outcome is anticipated.

Like their opponents this week, Spain have been seeing more action in the second half of their recent assignments, and La Roja went into the break level with their antagonists in three of their last five skirmishes.

With little riding on Wednesday’s result, and incentives to take chances few and far between, we think Netherland’s clash with Spain could be another slow burner, and we’re backing the teams to be level after 45 minutes.