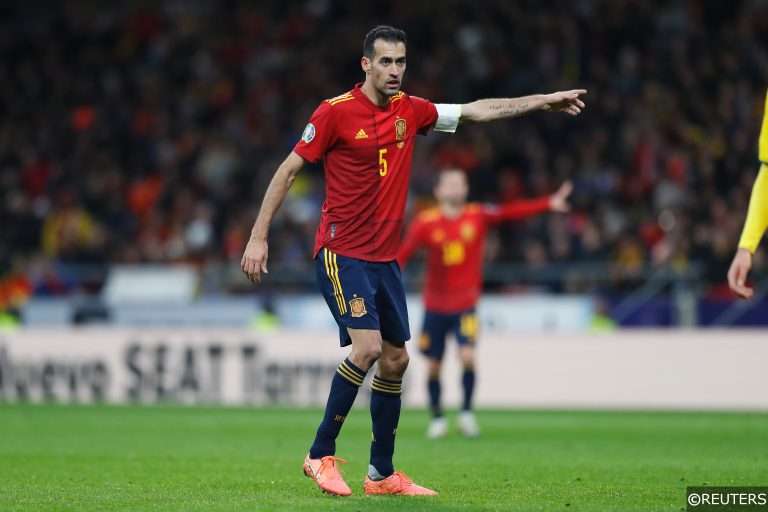 A powerful Die Mannschaft team will meet a technically talented La Roja outfit this week in a showpiece international fixture between Germany and Spain at Stuttgart’s Mercedes-Benz-Arena Wednesday evening.

The skirmish between two of Europe’s most successful footballing nations is easily the most compelling contest from a jam-packed Nations League schedule tomorrow, and with both sides keen to start their campaigns off in a positive manner, the competitive edge is expected to be sharp.

On paper, this Group A4 clash has the look of a potential section decider despite its early appearance on the Nations League fixture calendar, and both Germany and Spain will be hoping to use Wednesday’s game as a springboard for further success in the competition.

Ahead of this big-hitting Nations League bout, we’ve put together a tasty looking #OddsOnThat selection for the game that comes in at 25/1.

Remember – you can find a more comprehensive preview of the match complete with our expert’s analysis and betting tips in our Germany vs Spain predictions.

Germany will be without several key Champions League winning players from Bayern Munich for Wednesday’s Nations League opener in Stuttgart, but against a Spain side on the cusp of a major transition, the hosts should still be able to avoid defeat.

La Roja boss Luis Enrique has accelerated a changing of the guard in his team’s ranks ahead of Spain’s visit to Germany with a full 10 players who have collected one or fewer international caps named in his current squad.

Germany, who were beaten just once in their last 10 matches on home soil, have the edge in terms of experience and firepower over their visitors, with Timo Werner, Hai Havertz, Leroy Sane in particular forming a trio of explosive attacking weapons that should prove difficult to contain.

While Germany’s team looks laden with high-quality forward-thinking operators, their recent defensive record suggests that a sometimes-brittle backline should offer Spain opportunities to score in Stuttgart this week.

The Germans are a formidable outfit in their homeland, though a run of just four clean sheets in their last 10 assignments in Deutschland is a poor return by their own lofty standards.

Peru, Serbia and Northern Ireland are among the teams to have plundered goals in Germany over the past year, and Spain – a vastly superior outfit to all three – should also have the quality to make an impact on the scoresheet.

Keeping Die Nationalelf out at the other hand has proven a near impossible task for teams visiting Germany however, and Joachim Lowe’s charges failed to score just once at home since June 2016. With the factors and landscape considered, goals at both ends at the Mercedes-Benz-Arena are anticipated.

Rapid centre-forward Timo Werner should be exploding with confidence following his money-spinning switch to big-spending Premier League club Chelsea this summer, and the 24-year-old will be desperate to show his new employers what he is capable of when he turns out for Germany this week.

With just two goals in his last six appearances at international level, Werner’s recent return for the Germans has been relatively modest, but fresh from a club campaign where he notched an incredible 34 goals in 45 matches for RB Leipzig, the hitman has momentum to burn and should be his team’s biggest threat against Spain.

We’re backing the poacher to make his mark on the international stage this week, and with Toni Kroos, Leroy Sane, Ilkay Gundogan and new Chelsea teammate Kai Havertz supplying the ammunition, Werner won’t be short on chances.

Sergio Busquets to be carded

Even at 32, Sergio Busquets remains a key component in Spain’s midfield, combining an unerring passing accuracy with his ability to snuff out danger before it develops.

As the deepest lying midfielder for both club and country, Busquets picks up his share of bookings however, and the 116-times capped international was carded 13 times for Barca last season.

For Spain, he was cautioned twice in his last four appearances, and against a fast-breaking, counter-punching Germany side bristling with pace and energy, there is a good chance Busquets will have to call on his mastery of the game’s dark arts.

Spain’s last quartet of away matches produced a remarkably high number of corners with 58 in total awarded across the four contests, a figure that distills to an average of 14.5 corners per 90 minutes of action.

Germany’s last four competitive international fixtures meanwhile, saw a total of 45 corners awarded, which breaks down to an average of 11.25 per contest.

Both Germany and Spain accounted for the vast majority of corners awarded in their aforementioned respective games, and we expect them to combine to push through the 10 corners ceiling with relative comfort this week.