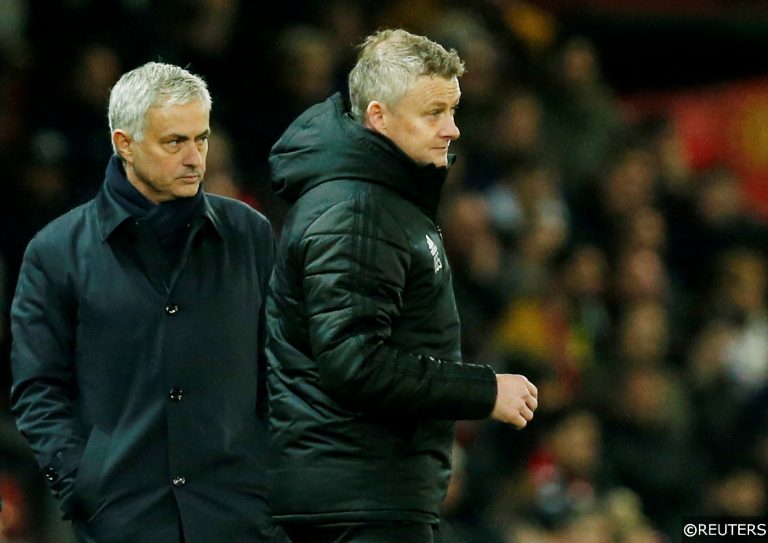 Tottenham Hotspur’s clash in the capital with Manchester United on Friday evening is a restart fixture worth waiting for and we have an OddsOnThat special for the game to match!

Friday’s contest pits current Spurs boss Jose Mourinho against his old employers in United and his successor in the Old Trafford dugout in Ole Gunnar Solskjaer – and the acerbic Portuguese manager will be determined to show his former club what they are missing this week.

With eight wins from 11 games before football’s March postponement, the Red Devils had built up a serious head of steam before play was halted, and a good performance in North London on Friday would help to allay fears about momentum being lost ahead of the crucial run in.

Friday’s game also marks the return to fitness of a number of potential match-defining stars on both sides with Harry Kane and Son Heung-min back for the hosts and Marcus Rashford and Paul Pogba available again for the visitors – though ring rust and a lack of match sharpness could yet limit their effectiveness.

Ahead of the action, our analysts have come up with a huge x/1 four-fold #OOT offering for Tottenham Hotspur’s tussle with United. Check it out below!

Make sure to check out our Tottenham Hotspur vs Manchester United predictions to read our expert’s betting tips and detailed analysis for the game.

Manchester United, inspired by the innovative brilliance of January signing Bruno Fernandes, were playing their best football of the 2019/20 season in the weeks directly before the enforced hiatus.

Their superb run of eight wins in 11 matches in all competitions was accompanied by an excellent eight clean sheets during the same period, with summer incomings Harry Maguire and Aaron Wan-Bissaka key to their rapidly improving defensive performances.

In contrast, Tottenham’s entire campaign looked on the verge of implosion after a stretch of five defeats in six, and embarrassingly limp exits to RB Leipzig and Norwich City in the Champions League and FA Cup respectively saw them enter the three-month break horribly out of form and low on confidence.

In victories over Man City (three times), Chelsea (twice), Leicester and Tottenham earlier this season, United showed a consistent aptitude for producing the goods in their toughest games, and we think the Champions League qualification chasers are priced generously to complete the double over Spurs on Friday.

While United have been making decent strides to improve efficiency in their defensive third – their record on the road this season suggests that a clean sheet at Spurs is highly unlikely.

David de Gea conceded in all but two of United’s 14 Premier League away assignments since August, and having failed to keep Tottenham at bay in four of his last starts against them, we’re tipping the Spaniard to let one past him again.

Despite some wildly inconsistent results, Spurs have managed to maintain an attacking threat right throughout their 2019/20 home campaign, netting in in 17 of their 21 competitive home games this term overall – though their return of just four clean sheets during the same time period screams that we should expect goals at both ends when they meet potent counter-attackers United this week.

Check out all of FST’s latest both teams to score predictions here.

Marcus Rashford has been receiving plenty of plaudits for his off the field work this week, but on the pitch, the 22-year-old had been enjoying the most prolific campaign of his career before injury struck.

Rashford had bagged 19 goals in all competitions for United between August and mid-January before a stress fracture to his back threatened to end his season prematurely.

The United academy starlet needs just one more goal to push through the 20 ceiling for the first time since arriving on the scene, and having hit both of his team’s goals in their 2-1 win over Spurs last year, a fit again Rashford is a prime candidate to register again.

Rashford scored the only goal of the game when United eked out a 1-0 win at Tottenham last season and his nose for the big occasion should serve him well again this week.

Giovani Lo Celso to be booked

Combative Argentine midfielder Giovani Lo Celso has been feeling his way into the first team picture at Spurs this season following his summer switch from Real Betis last year, though the 24-year-old hasn’t been shy about throwing his weight around when he has featured.

Incredibly, the tough-tackling schemer was booked five times in his last eight appearances for Spurs between early February and early March, adding to the two cautions he had picked up in his limited run outs before that.

Lo Celso was shown yellow in Spurs’ high-profile Premier League encounters with Man City, Chelsea and Wolves during that spell in the team – suggesting that his tenaciousness tends to ramp up considerably in Tottenham’s toughest tests.

The 21-times capped Argentinean international is certain to be snapping into the challenges again when he lines up against United this week, and that in turn makes him well worth backing in the cards market.

You can add our 25/1 OddsOnThat special for Tottenham Hotspur vs Manchester United to your betslip below!