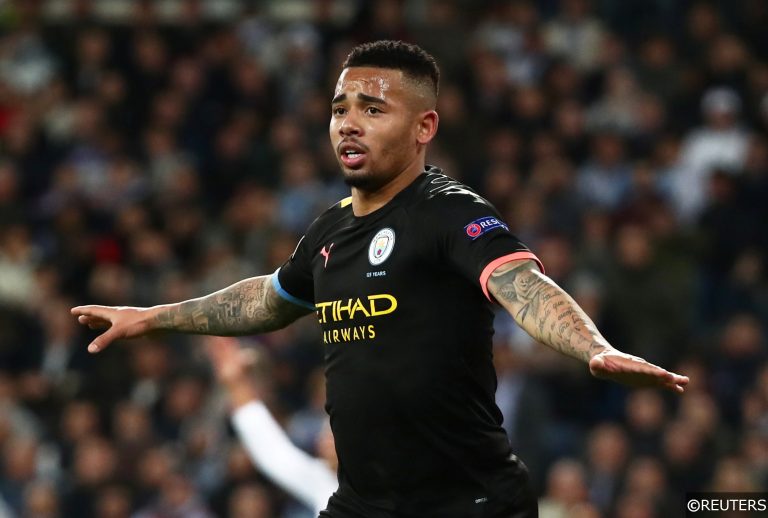 However, beneath that upper curst of fantastic final third finishers, is a new generation of outstanding young attacking prospects pushing hard to join their more senior role models on the top shelf.

Having already shone the spotlight on the best young midfielders in the Premier League and the top young defenders in England’s top flight – it’s time for their more forward-thinking counterparts to take centre stage.

With that in mind, we’ve assembled a list of the best young attackers currently strutting their stuff in the Premier League. Check it out below!

Remember – we’ll be covering the English top flight action in detail with betting tips and match previews on our Premier League predictions page.

At just 23-years-old, the increasingly influential Gabriel Jesus is already enjoying his fourth Premier League campaign with Manchester City, and the Brazilian attacker is well on course to eclipse the 21-goal haul he hit last season for the Citizens in 2019/20.

Schooled at Palmeiras in his homeland, Jesus has a devastating array of goal-scoring attributes at his disposal and his record of scoring a goal per every 133 minutes of Premier League action this season is as good as anyone’s.

One of several Chelsea academy graduates thrown into the team by Frank Lampard this season, Tammy Abraham’s return of 13 goals from 23 Premier League starts in 2019/20 is an impressive strike- rate for a player with such relatively low top-level experience.

Abraham enjoyed productive loan spells at Bristol City, Swansea and Aston Ville before he was handed a shot at Chelsea this term, though the South London born centre-forward has work to do to keep himself in the first team picture with the Blues.

With German international Timo Werner moving to Stamford Bridge before the start of next season, Abraham will need to drag his game up a couple of levels to avoid being replaced by the RB Leipzig hotshot.

Before a stress fracture to his back threatened to completely end his 2019/20 campaign, Manchester United starlet Marcus Rashford was in scintillating form, netting eight times in 10 Premier League appearances before injury halted his streak.

In total, the 22-year-old local lad had notched 19 times in total across all competitions in a campaign where the versatile attacker was starting to add end product to his sparkling approach play.

Rashford also has a real nose for the big occasion, something that Liverpool, Manchester City and Tottenham will testify to, and the England international is an outside contender to win the Premier League’s Golden Boot this year.

The Manchester born wonderkid has been tipped by many to eventually become one of the best strikers in the world. Read FST’s rundown of the game’s best finishers to find out which other Premier League stars currently make the cut.

The 18-year-old, who is equally adept with either foot, scored 12 times for United in a smattering for first team starts in a number of different competitions, and in the Premier and Europa League, the precociously talented teenager has been hitting the net once every 110 minutes.

Greenwood has been filling in on the right flank more often than not this term, though his long-term future is undoubtedly in more central areas.

Flying Wolves forward Diogo Jota, who turned just 23 before Christmas, is rapidly developing into one of the Premier League’s most difficult to handle attacking players.

With six goals in his last five appearances in the lead up to the postponement of club football across Europe in March, Jota was starting to hit the sort of numbers his defence shredding running had always threated to

Jota is one of several Wanderers stars to regularly fill the transfer gossip column inches, with Liverpool, Atletico Madrid and Man Utd all thought to be monitoring him closely.

In the era of extensive transfer databases and scouting networks, it’s proving more and more difficult to unearth a future star ahead of rival clubs, though Arsenal certainly beat their competitors to the punch when they plucked Gabriel Martinelli from Brazilian outfit Ituano last summer.

While Martinelli’s Premier League appearances so far have been fleeting, he still managed to score three times in the top-flight during his debut campaign in England, while his record of seven goals in nine cup starts is a superb first year return for the still green 18-year-old.

With Alexandre Lacazette and Pierre-Emerick Aubameyang both believed to be angling for a move away from the Emirates Stadium, Arsenal boss Mikel Arteta could have his new first choice marksman already in house with Martinelli.

23-year-old Everton striker Dominic Calvert-Lewin had been enjoying the most prolific season of his career before the COVID-19 led cancellation of football in March.

The Sheffield United academy product had rattled home 13 goals in 22 Premier League stats for the Toffees, with strong individual showings in games against Man City, Chelsea, Arsenal and Manchester United evidence of his growing stature.

With seven goals in 17 involvements for England’s Under 21’s, Calvert-Lewin has already shown an ability to produced the goods on the international stage and full honours with Gareth Southgate’s senior Lions could follow.

Watford smashed their transfer record to sign wide forward Ismaila Sarr from French club Rennes last summer, and after a low-key bedding in period at Vicarage Road, the Senegalese international exploded into life after the turn of the year.

Sarr’s searing pace and dizzying close control have combined to make him a nightmare opponent for Premier League defenders, and the 22-year-old’s match winning performance against champions elect Liverpool felt like a coming of age moment.

Sarr scored two and made the other of the Hornets’ goals in their shock 3-0 win over the Reds, and the new £30m Watford hero tore the Merseysiders’ notoriously mean defence to pieces.

7 expert bets for the opening weekend of La Liga