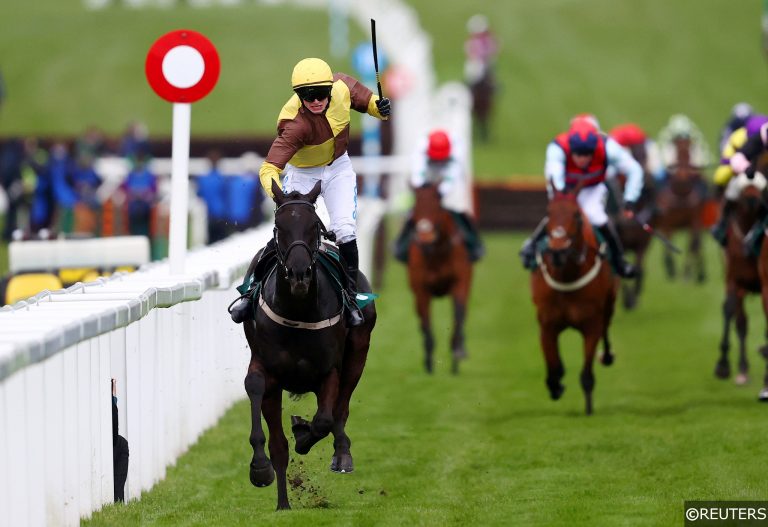 It’s the biggest horse race of the year for many and this Saturday the country will once again tune in to Aintree to watch the 2022 Grand National.

With 40 runners to choose from, plus the reserves, there is plenty of methods punters use to pick their favoured horse. If you’re just looking to have a bit of fun, how about marrying a horse up with your Premier League team of choice? We’ve picked out one for all 20 of the Premier League sides below.

Arsenal came under fire after shelling out a fortune on centre back Ben White over the summer but the former Brighton man has turned out to be a top performer for the Gunners. Aptly, the outlay of around £50 million for the 24-year-old marries up nicely with Top Ville Ben’s ante-post price.

Dingo Dollar could be a top pick for Aston Villa right-back Matty Cash if the 24-year-old fancies a flutter this weekend. He’ll be left counting a hefty pile of cash should his namesake come home at 66/1.

Brentford’s data-driven approach finally paid dividends last season as they were promoted to the Premier League but the Bees are also among the top teams when it comes to giving youth a chance. With the second-youngest average starting XI age of 25 years and 256 days, Thomas Frank is very much relying on the school boys to keep them in the top flight.

Brighton were the football statistician’s favoured team last season as they underperformed their expected goals figures throughout the campaign, only just avoiding relegation despite fantastic underlying numbers. But it all levels out in the end and one of those shots will go in Any Second Now.

Burnley’s extended stay in the Premier League looked to be coming to an end in February, with a narrow defeat to Liverpool making it 11 games without a win and star-striker Chris Wood turning out for relegation rivals Newcastle after a seemingly shrewd January signing. However, a 3-2 win over Everton on Wednesday made it ten points from their last eight games and leaves them just a point from safety. Can they rise like a Phoenix from the ashes?

The last month has been dominated by off-field issues for Chelsea but on the pitch they are still in the hunt for two trophies and young star Mason Mount will be key if they are to succeed in the Champions League and FA Cup. The 23-year-old has scored eight and assisted nine in all competitions this season and Chelsea fans could fancy namesake Mount Ida to be their lucky punt.

Many expected Crystal Palace to struggle this season after the appointment of Patrick Vieira but the Frenchman has helped his Eagles to soar up into the top-half of the table. If Anibale Fly can fly like Vieira’s Eagles there’s every chance of a big payout.

Perched just a point above the relegation zone, Everton fans haven’t had much to enjoy this season and 31-year-old midfielder Allan has been no exception with 22 appearances ranging from very poor to just-above average. Maybe Enjoy D’Allen can bring some much-needed joy to Toffees fans at Aintree.

Grand National pick: Lostintranslation at at 66/1

Marcelo Bielsa may have said his farewells to Elland Road but the Argentine manager will forever be remembered in this part of Yorkshire and one of his defining characteristics was the English translator constantly by his side, ensuring nothing was Lostintranslation.

The heady days of 2015/16 will live long in the memory of Leicester fans and while that glorious year is behind them, talisman Jamie Vardy is still going strong and there’s every chance he could be hosting another party this year. The Foxes are still in with a shout in the Europa Conference League and, should they win it, you can bet your bottom dollar Vardy will be partying again, although maybe not a Poker Party.

Liverpool’s hunt for an unprecedented quadruple is still on the cards and if they are to achieve the unthinkable they will need everyone firing on all cylinders, including link-up expert Bobby Firmino.

Last year’s Grand National winner Minella Times is bidding to repeat the success with back-to-back victories at Aintree and that’s something Manchester City are hoping to achieve in the Premier League. Know the last time the Grand National was won by the same horse twice in a row? 2018 and 2019, which just so happens to be the only time Manchester City have won back-to-back Premier League titles.

Driven by good intentions and boundless energy, Manchester United midfielder Fred has enjoyed something of a popularity resurgence under Ralf Rangnick as he runs wild across the Old Trafford pitch. Should he finish first at 20/1, Run Wild Fred will certainly enjoy a similar popularity surge.

Both Newcastle and Enjoy D’Allen have been purchased by owners with deep pockets recently and both look to have bright futures ahead of them, while Magpies fans might also liken the 12/1 shot with namesake and cult hero Allan Saint-Maximin.

The definition of a yoyo club, Norwich are rooted to the bottom of the Premier League table with just 18 points from 30 games. They have a seven-point deficit on 17th-placed Everton and it’s an understatement to say they have a mountain to climb if they are to avoid the drop.

Ralph Hasenhuttl’s Saints have kicked on in the last few months and look capable of challenging for a top-half finish after a relatively slow start to the campaign, much like namesake Burrows Saint after the 20/1 shot finished second behind Al Boum Photo in January.

Class Conti may not be a class apart for Willie Mullins’ team in the Grand National but the huge 150/1 shot does share a name with a manager who is a among the gold standard, although Spurs fans will be hoping Antonio Conte can perform better than Class Conti’s odds suggest in his battle for a top four berth.

Watford have made a name for themselves for being ruthless when it comes to replacing managers and Fiddleontheroof sees about as many jockeys as the Hornets do managers, with each of them having three apiece since January 2021.

Wolves find themselves in the fight for European qualification under Bruno Lage this season and with the fourth-best defensive record in the Premier League it’s clear where there strengths lie. Centre back Romain Saiss has been key to their success and admirers of the Moroccan defender might fancy a small punt on this 150/1 outsider, who is the third reserve runner.

The Grand National sweepstake is one of the pillars of any office or friendship group but there’s no denying it can be a pain to organise.