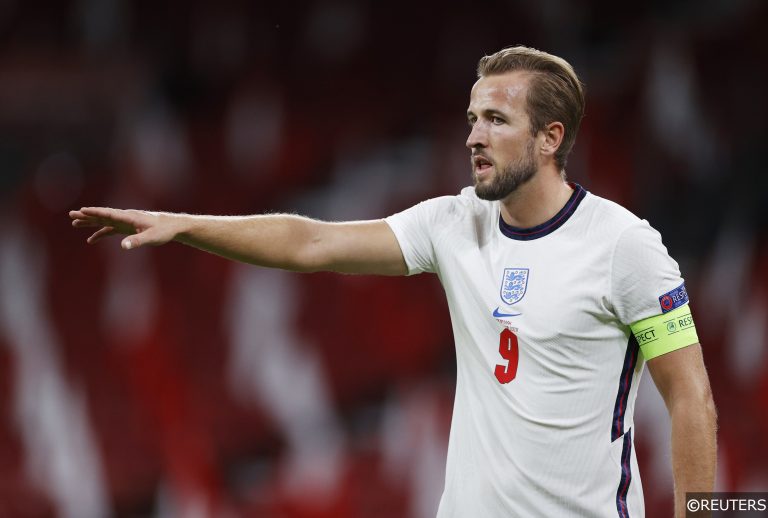 England entertain Italy in the Nations League on Saturday in the first meeting between the two sides since the Azzurri broke the Three Lions’ hearts with a win on penalties in the Euro 2020 final last summer.

Gareth Southgate’s men need to kick start their campaign in this competition after picking up just one point from their first two games. Italy haven’t been particularly impressive either but they do have four points from six available so far.

We’ve already covered the game in our Match Predictions, and now I’ve picked out five selections and combined them to create a huge 102/1 Ultimate Bet Builder tip ahead of the clash.

You can back my bet below, or pick out a few of these selections for your own bet builders ahead of the game.

Harry Kane is closing in on Wayne Rooney’s scoring record for England after his strike from the spot against Germany and he can add to his 50 international goals with another against Italy.

Kane finished the Premier League season strongly with club side Spurs with five goals in total in his final five games. The forward will be on spot kick duties again on Saturday and after becoming just the second man to reach 50 goals for England he will be in confident mood ahead of the visit of Italy.

Italy full-back Leonardo Spinazzola made a big impression at Euro 2020 last summer despite the fact his tournament was cruelly cut short by a ruptured Achilles tendon.

The Roma star only returned to action towards the end of the season, making just four appearances, but he still managed to impress and he registered a first assist since his comeback in the Azzurri’s 2-1 win over Hungary last time out.

The 29-year-old is a constant threat for the Azzurri and in his last eight games for his country he is averaging 1.6 key passes per-game, 2.0 crosses and he has a pass success rate of over 85%. Those stats demonstrate he is always capable of providing for a team mate and at a big price an assist from Spinazzola looks a good option on Saturday.

Jarrod Bowen to have one or more shots on target

There aren’t too many spots up for grabs in the England squad ahead of the World Cup later this year, and West Ham’s Jarrod Bowen is one man who will feel he is playing for his place after being called up for the first time for this latest batch of fixtures. Bowen has impressed in his 100 minutes of action across two games so far and he should be in the starting XI on Saturday. Bowen averaged 2.2 shots-per-game for the Hammers in the Premier League and 0.9 on target across all competitions, he also had four attempts against Hungary in total and two of those were on target, so he can test the keeper at least once at Molineux.

Giacomo Raspadori to have one or more shots on target

Sassuolo’s rising star Giacomo Raspadori is expected to start for Italy and he can register an attempt on goal. The 22-year-old averaged 2.0 shots-per-game for the Neroverdi in Serie A, 0.7 on target, and although he doesn’t quite post those kinds of numbers for Italy he still stands out as a good contender at a decent price considering England conceded 23 shots, 11 of which were on target, across their last two games against Hungary and Germany.

England tend to win plenty of corners and they managed to force eight against Germany and six against Hungary, taking more than their opponents in both of those games. The Three Lions won five to Italy’s three when these sides met in the Euro 2020 final last summer and they should be able to win the corner match bet when these two sides meet again on Saturday.