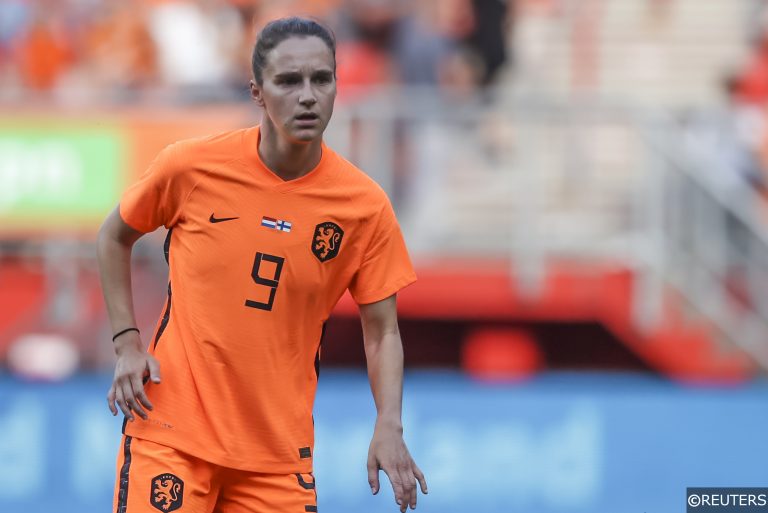 The Women’s European Championship kicks off at Old Trafford on Wednesday evening and, with England hosting the tournament and being among the favourites to win it, interest is high among football fans.

With the upcoming tournament in mind, we asked some experts who they think has the biggest chance of topping the individual goalscoring charts.

Although I fancy the Lionesses to lift the trophy, I am reluctant to back any England forwards in the top goalscorer market as goals are often shared about an attack which boasts plenty of depth.

Therefore, I’d opt for Marie-Antoinette Katoto of France. The 23-year-old is her country’s focal goal threat and is renowned for her pace in-behind and her ability to peel off defenders.

Katoto bagged 32 goals in 33 matches in all competitions for Paris Saint-Germain last term and already has six goals for France to her name in 2022. Les Bleus do not face any other powerhouses of the women’s game in the group stage and Katoto can capitalise.

There are only four players available at single-figure quotes to lift the golden boot at this year’s women’s Euros and of them it is French star Marie-Antoinette Katoto who looks the most convincing.

Picking the winner of the tournament doesn’t look easy – it is 9-2 the field for a reason – but France should be involved at the death and, providing they are, Katoto looks likely to be amongst the goals.

The 23-year-old has racked up 108 goals in 113 appearances for club side Paris St-Germain and since earning her first cap for France in a friendly victory over Brazil in 2018, she has netted 24 times in 28 internationals.

That scoring rate is seriously impressive and their Group D section, featuring Belgium, Iceland and Italy, looks soft so she could set the bar high pretty early. At 6-1, with four places available for each-way backers, there is a lot to like about her chances.

Marie-Antoinette Katoto has a decent claim to the Golden Boot after another excellent season with club side Paris Saint-Germain. The 23-year-old scored at a rate of a goal a game for the Parisians as she finished the season with 20-plus goals for the fifth campaign in a row. Katoto has shown she has international class too with her goal record at this level an impressive 24 goals in 29 appearances.

France don’t appear to have the toughest group on paper with Belgium and Italy decent but limited sides, and Les Bleues shouldn’t have too many issues opening up their sectional opponents to get Katoto on her way.

England boasted the top goalscorer in the last European Championships and have home advantage for Euro 2022, with Ellen White installed as the favourite to win the Golden Boot.

The Man City star has claims, particularly in one of the weaker-looking groups, but so too does France’s Marie-Antoinette Katoto, who has thrived for Les Bleues having scored 24 goals from 29 appearances.

The PSG star also bagged eight goals in qualifying and with the third-best side in the Fifa rankings facing an easy group stage, the 23-year-old looks capable of making a fast start in the Golden Boot race.

France have impressive continuity in their lineup, with the PSG frontline of Marie-Antoinette Katoto, Kadi Diani and Sandy Baltimore supported by members of the Champions League-winning Lyon side.

Belgium and Iceland should be straightforward opponents for the French and Katoto should make the most of that. She won player of the year in the French top flight last term and her Ballon d’Or credentials could be boosted by a strong showing at the Euros. As the focal point for a side heavily backed to win their group, back Katoto to rack up the goals.

Opinions split between rest of the field

Alexia Putellas is the best female footballer on the planet and she looks worth a shot at 11-1. Putellas has scored 117 goals in 271 games for Barcelona and she now moved into a Spanish side that notched 48 times in qualifying for the European Championship.

Clearly, it’s a better level of opposition in the tournament proper, but the current Ballon d’Or holder has to have a good chance of racking up a fair few goals in the group stage.

Putellas has notched 26 times in 98 appearances for her national team and I can see her improving that record in England.

The word prolific is often used to describe Netherlands and Arsenal star Vivianne Miedema and she must surely be in contention for the Golden Boot at the women’s Euros.

The 25-year-old has a frankly staggering 94 goals in 111 Dutch caps so far, while she’s hit 114 in 132 club games for the Gunners since joining from Bayern Munich in 2017. Her overall club stats list her scoring a mind-blowing 249 goals in just 282 games, and she’s bang in form ahead of the Euros. Miedema comes into the tournament with three goals in her last four games for the Dutch, including a brace in Saturday’s 2-0 friendly win over Finland.

Ellen White is the bookies favourite for the Golden Boot and it is easy to see why given the relatively easy group England find themselves in.

The Lionesses should make light work of Norway, Northern Ireland and Austria and there is nothing stopping White from filling her boots in Group A. The Manchester City striker, who is England’s record goalscorer, has scored 14 goals in 13 appearances for England since the start of 2021 and has the backing of home support to spur her on.