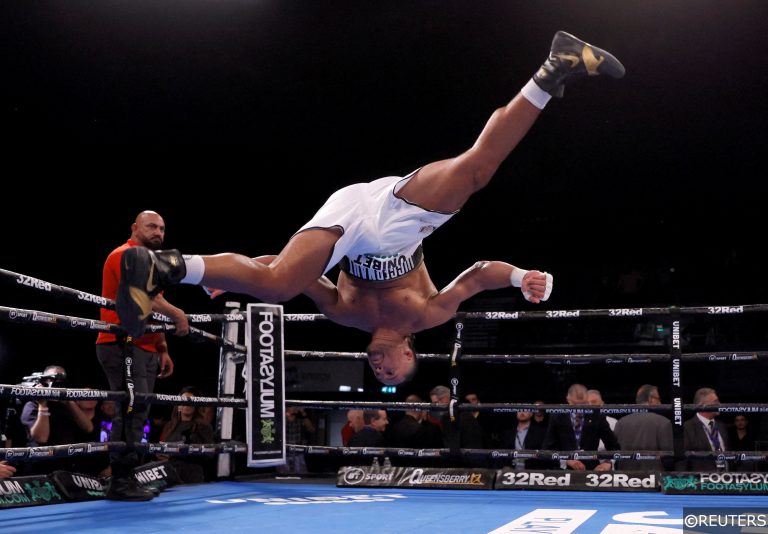 Joe Joyce continues his bid to engineer a world title fight on Saturday as he takes on Joseph Parker at the Manchester Arena.

The winner will claim the vacant WBO interim heavyweight title and become mandatory challenger for the main belt, which is currently held by Oleksandr Usyk. A title fight, however, could still be some way off as Usyk is likely to take on Tyson Fury next year in a unification fight, providing Fury beats Anthony Joshua later this year.

We’ve got the big fight covered, as well as details on how to watch. We landed a 16/1 accumulator tip for last week’s huge middleweight match-up between Canelo and Gennday Golovkin and this Saturday out acca pays out at 15/1, which you can see and back below.

Where to watch Joyce vs Parker

The fight takes place at the Manchester Arena on Saturday, September 24, and ring walks for the main event are expected to take place at 10:30pm.

If you want to attend the fight itself tickets are still available, with prices starting at £64.95 + booking fee. The fight will be broadcast on BT Sport Box Office in the UK and the price for the event is £19.95.

Who is on the Joyce vs Parker undercard?

Parker, 30, held the WBO title between 2016 and 2018 before suffering a first professional loss, a points defeat to Joshua in Cardiff. He then lost out on points to Dillian Whyte but has recorded six wins since – including two against Dereck Chisora in Manchester – leaving him with a record of 30 wins (21 KOs) and two defeats.

Joyce is unbeaten after 14 contests and 13 of those have come inside the distance, but this is perhaps his toughest fight to date.

Saturday’s clash should be a close battle between two fighters looking to set up a world title fight. New Zealand’s Parker has been there and done it before, while Joyce boasts an unbeaten record and goes into the fight on the back of a four-round demolition of Christian Hammer.

Joyce clearly carries plenty of power but he is facing a man who has never been stopped, despite the fact Parker has been knocked down a couple of times over the last few years, and as such he may need the judges to decide this one.

This contest will probably be much closer than the odds suggest, Joyce is 1/2 and Parker is 13/8, but I’m still siding with the favourite here and a points win for Joyce looks a strong option at 13/10. Joyce simply cannot afford any setbacks in his bid to become a world champion and I think that – and home advantage – just gives him the edge here.

Last Saturday’s boxing acca landed at 16/1 and this fourfold pays out at 15/1.

Fight to go the distance – Yes

Unbeaten welterweight Ekow Essuman takes on Samuel Antwi in what looks a competitive clash and this one could well go the full 12 rounds. Essuman has seven KOs in 17 wins, while Antwi has lost just once in 15 fights. Antwi’s defeat did come via a stoppage but that was back in 2018 and he has fought seven times since, so this match-up looks likely to go the distance.

Belfast native Anthony Cacace faces a tricky match-up with unbeaten Italian Michael Magnesi for the IBO World Super featherweight title in what looks a fairly evenly matched contest. Cacace has lost once, but has since recorded some impressive wins – including a points win over Sam Bowen. The southpaw has arguably faced the better standard of opposition and has a degree of home advantage, but he doesn’t have a huge amount of power with just seven of his 21 wins coming by stoppage so a points win for ‘Anto’ is the selection.

Amanda Serrano gave superstar Katie Taylor a bit of a scare in her last fight but ultimately lost on a split decision. The Puerto Rican will be looking to make a statement against Sarah Mahfoud, and she can record a 31st stoppage win. Denmark’s Mahfoud is unbeaten after 11 fights but this is likely to be a step up in class too far and Serrano will be hungry to put on a big performance, so back her to get the job done without needing the judges.