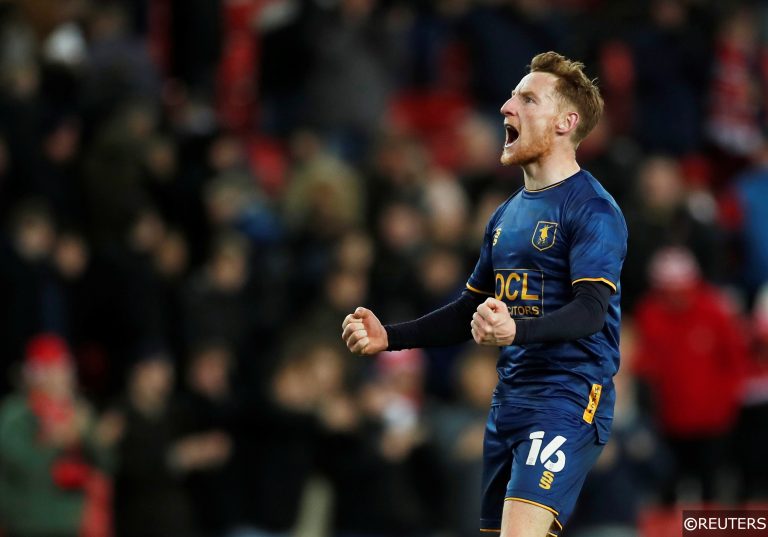 League Two was arguably the most competitive division in the Football League last season as just nine points separated the top nine and we could be set for another fascinating campaign this year.

Promoted Stockport County are rated as the favourites to win the league, ahead of Bradford and Salford, but there are plenty of teams who will fancy their chances of challenging for the title and promotion.

I’ve picked out options for the outright winner, promotion, relegation and a top scorer selection with just over a week to go until the action resumes once again.

Stockport are the favourites to win the League Two title next season and they’re definitely a club on the up after securing a return to the Football League after over a decade outside of the top four divisions. The Hatters have a good manager in place in Dave Challinor, who has experience managing at this level with Hartlepool, and look well placed to challenge for back-to-back promotions but I’m reluctant to back a newly-promoted team to win the league outright.

Instead, at a bigger price Mansfield Town appeal after coming close last term. The Stags finished seventh in the standings last season but they were still only eight points behind champions Forest Green, and they then went on to lose to Port Vale in the play-off final.

Mansfield have largely managed to keep their squad intact and the captures of midfielder Hiram Boateng and veteran keeper Scott Flinders from MK Dons and Cheltenham respectively look shrewd editions.

The Stags made their Field Mill home a fortress last season as they won 15 of their 23 games, losing just four. They have an experienced manager in place in Nigel Clough and the quality to mount a sustained title challenge in the coming campaign – if they can replicate last season’s home form and improve on their travels then they should be among the contenders to finish top of the pile.

Mansfield deserve a mention here as well at a not-too-shabby 9/4 to be promoted if you’re not convinced by their title credentials, but for a bit more value relegated AFC Wimbledon look a solid option at 5/1.

Admittedly, they have lost a few big players as Jack Rudoni has departed for Huddersfield and Ben Heneghan has joined Sheffield Wednesday – but if others can step up and fill that void I see them as a team capable of challenging for a top seven spot.

The Dons had a woeful end to the season last term as they dropped out of League One but they were still fairly tough to beat and too many draws were ultimately their problem. At a lower level, they can turn those draws into wins and they can challenge for a top seven spot as they look for an immediate return to the third tier.

With four spots available, it makes sense to offer another option and Northampton stand out at a more modest 10/3. The Cobblers only just missed out on the automatic spots last term and should be in the mix again.

The relegation market in League Two is a little tougher to work out with only two spots to avoid but Harrogate Town could be in line for a difficult season and at 5/1 they look an interesting option.

Barrow are the favourites for the drop and next in the betting are Hartlepool United and Rochdale. All three will probably be in the bottom half of the table but the 11/4 on Barrow isn’t particularly eye-catching for a season bet and the 9/2 on both the Pools and Dale looks too short.

Harrogate made a great start last year but that was as good as it got for the Sulphurites. Harrogate won just six of their final 27 games last season and lost 16 of those as they ended up finishing in 19th place, while they shipped 75 goals and only bottom club Scunthorpe conceded more. If they pick up where they left off when the new campaign gets underway, they could be in trouble.

With each-way betting available on the top scorer market, paying four places with bet365, it makes sense to go for an outsider in this market and the 66/1 on Newport County new boy Omar Bogle has real appeal.

Bogle, who is as short as 33/1 elsewhere, hit five goals in 20 games for an out-of-sorts Hartlepool United last season after joining in January. That may not be the most impressive return, but it is worth noting that the Pools’ form tailed off towards the end of the campaign and the last time he was at this level he hit 19 goals in 27 games for Grimsby in 2016/17.

Newport create plenty of chances and Dom Telford, now with Crawley, topped the scoring charts last season. Bogle will be the focal point in their attack next term and at 66/1 he looks a huge price to finish as League Two’s leading marksman.