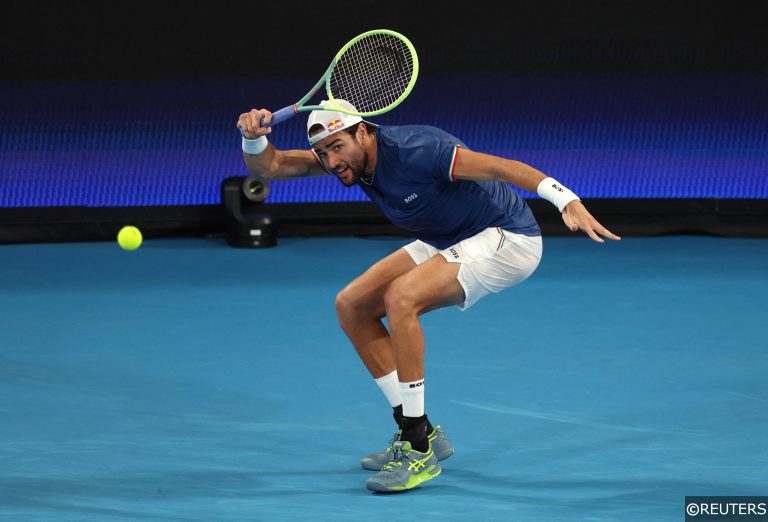 We’re closing in on the first tennis Grand Slam of the year and we’ve already got you covered with our tips and predictions for the 2023 Australian Open.

However, we’ve cast our eye a little further down the line, selecting a winner for both the men’s and women’s singles for all the slams in the same vein as our 59,849/1 golf majors accumulator.

Aryna Sabalenka has long been touted as a future Grand Slam champion and this year’s Australian Open is where everything could fall into place for the 24-year-old Belarusian.

Sabalenka is already in winning form this year, having secured her 11th career title in a warm-up event in Adelaide, and when on-song her hard-hitting style allows her to blow the opposition away.

The powerful world number five has made three semi-finals from her last five Grand Slam starts and that indicates that her time may be fast approaching.

The Belarusian may now be at the right age to challenge for Major silverware and its worth remembering that she finished last season with a run to the final of the WTA Finals, a tournament in which she recorded wins over Iga Swiatek in the semi-final and Ons Jabeur and Jessica Pegula in the group-stage.

Polish world number one Iga Swiatek is already a three-time Grand Slam champion at the age of just 21 and her domination on clay means plenty more big successes should follow.

On her best form, Swiatek looks a cut above everyone else on this slower surface, highlighted by her convincing French Open title triumphs in 2020 and 2022.

There’s every chance she could dominate this tournament just as Rafael Nadal has done on the ATP Tour and after last year’s convincing success, which culminated in a 6-3 6-1 win over Cori Gauff, it’s tough to see how she can be stopped in the French capital.

There has been a different women crowned winner of Wimbledon in each of the last six years the tournament has taken place and this season may be the turn of Ons Jabeur.

The talented Tunisian has shown her liking for the grass in recent seasons, finishing runner-up to Elena Rybakina last year and reaching the quarter-final in 2021.

Having also finished runner-up at the US Open last season, Jabeur is evidently closing in on a Grand Slam prize and it is the hallowed turf of the All England Club that appears her best chance.

The current world number two has claimed two of her three titles on the WTA Tour on the grass and it is a surface that plays to the strengths of this excellent mover.

Cori Gauff to win the US Open

For an 18-year-old, Cori Gauff is extremely experienced and the American has already shown herself as a star of the future with two career titles and a run to last year’s French Open final.

Gauff made her third career Grand Slam quarter-final at last year’s US Open at Flushing Meadows, a venue where she could be destined to claim a first Major title just as Emma Raducanu did in 2021.

If going deep in the event, Gauff will have the home crowd on her side and the world number seven has already displayed herself as being a world-class operator on countless occasions.

It is surely only a matter of time before Gauff dines at the top table and this year this appears her best chance of doing so.

Novak Djokovic is already a nine-time winner of the Australian Open and having been forced to miss last year’s competition, the Serb looks determined to make up for last time.

Djokovic’s last three appearances in the Australian Open have seen him claim the silverware and, while he appears to be raring to go, there are doubts surrounding many of his chief title rivals.

World number one Carlos Alcaraz is a notable absentee, defending champion Rafael Nadal has to prove his well-being while two-time runner-up Daniil Medvedev was soundly beaten in straight-sets by Djokovic in a warm-up event in Adelaide just last week.

The Serb went on to win that title and should take all the beating in his pursuit of a 22nd Grand Slam crown.

Rafael Nadal has made the French Open his own, having won the title on 14 of his 18 visits to Paris, and the Super Spaniard may have another Roland Garros triumph in his locker.

At 36 years of age, Nadal’s levels are soon going to drop and he isn’t by any means the force he once was.

That said, clay is a specialist surface and there is none better on the slower terrain than Nadal, who is the defending champion.

This is Novak Djokovic’s most vulnerable surface and while young pretender Carlos Alcaraz could soon make this tournament his own, he was beaten in last year’s quarter-final by Alexander Zverev.

Nadal eased past Casper Ruud in last year’s French Open final, winning 6-3 6-3 6-0, and there is no reason to desert him just because of his advancing years.

Matteo Berrettini was forced to withdraw from Wimbledon on the eve of the tournament last year after testing positive for COVID-19, but the 2021 runner-up should not be forgotten about.

Djokovic defeated Nick Kyrgios in last year’s final but many felt grass-court specialist Berrettini would have made his presence felt.

The Italian brute lost in four sets to Djokovic in 2021 but was a serious test for the Serb throughout and will be well aware that his best chance of claiming Grand Slam glory is on his favourite surface, the turf.

Berrettini is a seven-time winner on the ATP Tour and four of those titles have come on the grass, which includes at Queen’s Club in each of the last two seasons.

The 26-year-old can be prone to injury but this is a tournament he will be targeting and he has shown he has the grass-court game to reign supreme at the All England Club.

Carlos Alcaraz to win the US Open

After making his Grand Slam breakthrough at the US Open last year, it seems unlikely that the 19-year-old is going to go a full season without following up with another big one.

Alcaraz is an absentee from the Australian Open and has it all to prove on grass, so the French Open and US equivalent appear the most likely destinations.

King of Clay Nadal may have something to say in Paris so the teenage sensation may have to wait until defending his title in America.

Alcaraz rose to world number one after his heroics at the US Open last year, with wins over Marin Cilic, Jannik Sinner, Frances Tiafoe and Casper Ruud seeing him take the title.

It was a breakthrough 2022 for Alcaraz, who won five titles in total including ATP Masters 1000 events in Madrid and Miami, and he will surely be motivated to defend his US Open crown.

In The Mixer: Experts talk up 20/1 Roma’s Europa League bid