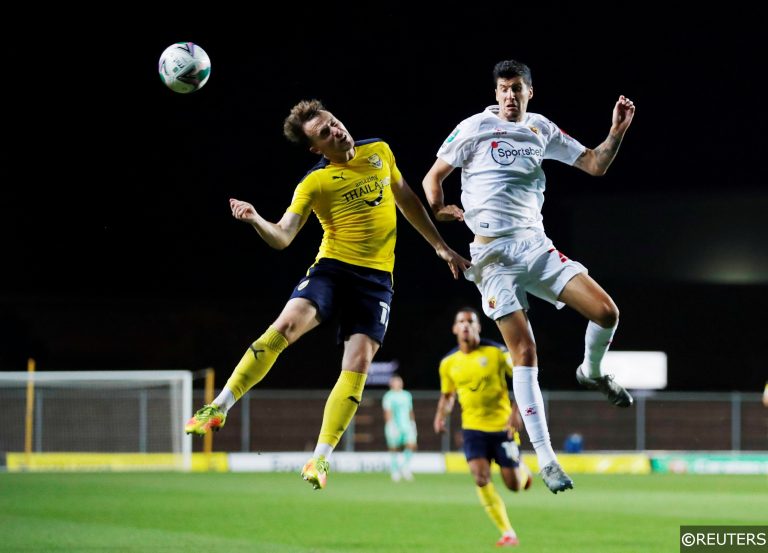 After 12 Championship games across Friday and Saturday England’s second tier is quickly back in action for an Easter Monday slate of games. The round kicks off with arguably the most interesting clash of the bunch, as Middlesbrough host Watford.

The hosts have serious playoff ambitions, making them a test for a Watford side who are on a roll and bearing down on a Premier League return. With that in mind, we’ve ran through the big markets on this clash to produce our same-game multi selections and a 105/1 bet builder prediction, which you can see below.

You can find the rest of our tips for Monday’s Championship games in our match predictions section.

Watford have made a brilliant run to climb into the automatic promotion spots in the Championship and they’ve now opened up a nine-point lead over third. That fine form has come thanks to them winning each of their last six matches and seven from eight overall.

No Championship side have secured more points across the last eight games than Watford’s 21. Meanwhile, Middlesbrough have lost three of their last five league games and three of their previous four clashes with the Hornets. Given how impressive the visitors have been of late an away win is our first bet builder selection.

While we see the visitors taking the points, we don’t expect them to run away with it. Our Middlesbrough vs Watford predictions point to a 2-1 away win, with Boro in decent form in front of goal.

Watford come into this one having failed to keep a clean sheet in their last four away trips, despite their recent winning run. Meanwhile, Middlesbrough have scored in six consecutive matches at the Riverside so we think both teams to score is good value here.

Watford have averaged over six corners per away game this season and we see that continuing here. Not only have the Hornets recorded at least five corners in four of their last five games, but they are likely to see plenty of set piece action in a game we back them to dominate.

The Hornets have averaged 54% of possession per away trip, with Middlesbrough seeing just 46% of the ball per home game. With Watford coming here full of confidence we see them making plenty of surges forward, so they should win over four corners.

Both of these sides have midfielders who toe the line when trying to pen back the opposition. Watford’s Nathaniel Chalobah has more bookings than any other player across the two sides, as he’s been cautioned 10 times this term. He makes 1.7 fouls per game on average and we can see him getting another yellow on Monday.

Meanwhile, Middlesbrough’s Sam Morsy has made 1.9 fouls per game this term, picking up eight bookings as a result. With Morsy facing a top Watford side this week, we are also backing him to be cautioned in this clash.

March tip report: Another month of winners for FST!