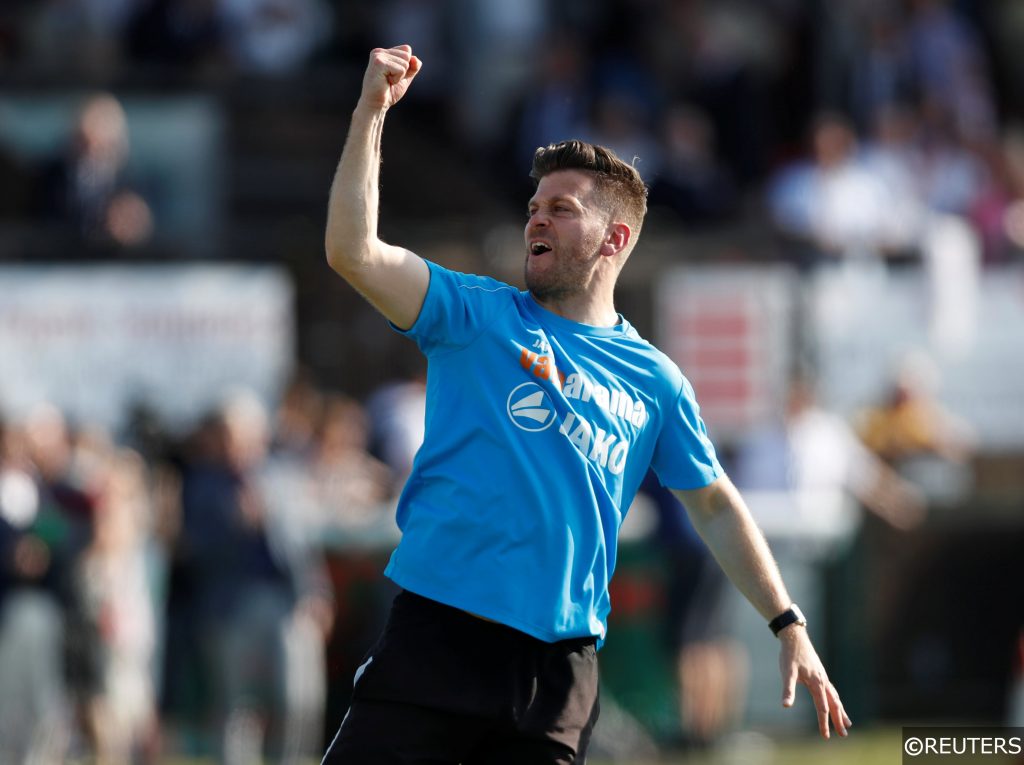 International endeavours continue to steal focus this weekend, however, there is still plenty of exciting club action to look forward in the lower tiers of the England football pyramid on Saturday afternoon.

There are nine National League games to keep you interested tomorrow, and below we take a look some of our favourite bets from Saturday’s schedule.

We’ve also got a glut of EFL betting tips and analysis for you to sink your teeth in to on our League One match predictions page and our League Two predictions and best bets feature complete with a huge 160/1 acca – make sure to check them out before kick-off tomorrow!

Keep reading to discover our National League best bets below along with our tasty looking 43/1 acca!

With four wins on the bounce, Maidenhead are advancing up the National League standings at a rate of knots, though the Magpies failed to keep a single clean sheet during their surge.

Chesterfield have been struggling to find positive results, however, The Spirerites have scored in 100% of their league games at the Technique Stadium, and should register again.

Betting tip: Both Teams to Score

A run of six wins in eight games in all competitions has allowed Solihull Moors to build a powerful head of stream over the past month, and on Saturday, James Shan’s side can maintain their momentum at Halfax’s expense.

Without a victory in five attempts in the National League, Town’s misery was amplified by an embarrassing FA Cup exit to South Shields in late October, and with their confidence at a low ebb, The Shaymen could come unstuck again.

Sutton bounced back from successive home defeats in league and cup to Notts County and Bromley respectively by beating bottom club Yeovil on the road last time out, a result that suggested United – who had won three on the spin before their double reverse – look ready to restart their ascent up the table.

Kings Lynn were turned over in each of their last two assignments on their travels, shipping a galling seven goals along the way, and newly promoted Town could be sunk again against a much stronger Sutton outfit.

Table-topping Torquay can tighten their grip on first place with another victory this weekend against a Boreham Wood side searching for consistency.  The hosts have won five games in a row, and Torquay’s self-belief was topped up further when they notched nine goals combined in their last two outings.

Boreham Wood avoided defeat in three of their last five National League matches, though Luke Garrard’s toothless side failed to register in three of those games, and their lack of final third thrust could count against them again on Saturday.

Second from top meets second from bottom Grosvenor Vale, when promotion chasing Wealdstone entertain relegation candidates Dover. The Stones are rolling up the table following a string of five straight wins, and with momentum to burn, another victory this weekend looks likely.

Dover meanwhile have been generous visitors this season, and having been toppled in each of their first three away tests of the new campaign, another one-star jaunt looks probable.

Woking are trapped in mid-table limbo after some up and down results, though they have looked far more impressive in the familiar surroundings of the Kingsfield Stadium than they have done on the road.

The Cardinals are unbeaten on their own patch so far, taking seven points from nine at home overall, and we don’t expect Woking to suffer their first loss there to the National League’s bottom club Yeovil.

You can back all six of our favourite National League bets for the weekend in one accumulator below, with the sixfold being priced up at 43/1 with bet365.

Woking to Win vs Yeovil Town

Woking have yet to taste defeat at home in the National League this term, and while their away form continues to stutter, The Cardinals’ return from seven points from nine at the Kingsfield Stadium should allow them to play with confidence again on Saturday. Bottom club Yeovil are the visitors, and having lost at home to fellow relegation contenders Chesterfield in their last assignment, Town will arrive looking vulnerable again.