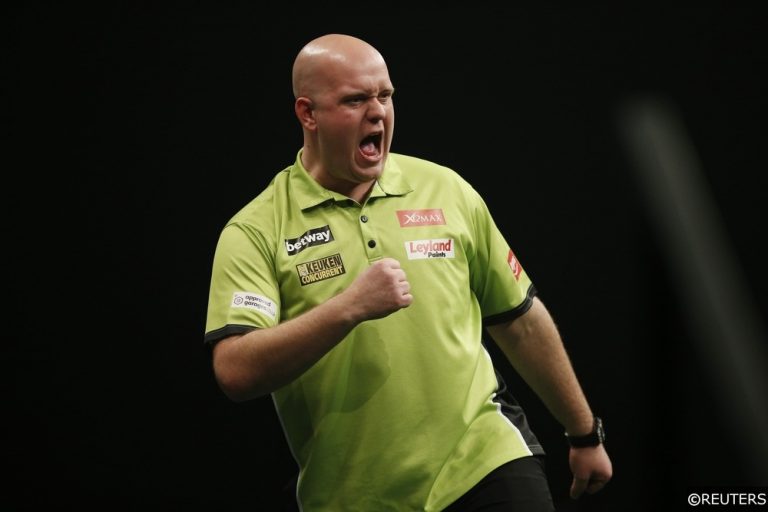 The PDC World Championship begins this week at the Alexandra Palace in London and we’ve recruited Racing Post darts expert Aaron Ashley for his thoughts ahead of the showpiece event.

The rise of Gerwyn Price and the sheer consistency of Peter Wright mean it has been a tough couple of seasons for MvG, but the Dutchman appears back to his imperious best.

Back in 2019, Van Gerwen was simply untouchable and, after months of hinting that he was edging back to rediscovering that form, it looks as if he has peaked just in time.

It has been a super year for MvG, who has won the Premier League, World Matchplay, World Grand Prix and Players Championship Finals.

So with defending champion Wright seemingly struggling to find his best form and world number one Price potentially already at a disadvantage in needing to win over the boo boys, MvG’s claims look crystal clear.

The draw doesn’t look too shabby for him, either. An opening game against Niels Zonneveld or Lewy Williams should settle the nerves, while Mensur Suljovic, Dirk van Duijvenbode and Ross Smith are all that stands in the way of a quarter-final spot.

From there, former winners Rob Cross or Gary Anderson would be the most daunting proposition, neither in good enough nick to cope with the fired-up Dutchman.

Wright is also housed in the bottom half of the draw but the Scotsman’s quarter is thwarted with danger as Dimitri Van den Bergh, Jonny Clayton, Nathan Aspinall and emerging star Josh Rock are all fighting for a semi-final spot.

While MvG looks a strong favourite for a fourth world title, another Dutchman also appeals as a viable outsider.

Housed in the top quarter alongside Price, Danny Noppert is well drawn and has had an ultra-consistent campaign.

Noppert, a former BDO World Championship runner-up, claimed a first Major title when beating Michael Smith to win the UK Open in March and he has also made the semi-final of the World Matchplay and the quarter-final of the European Championship and Players Championship Finals.

The 31-year-old has shown himself to be a top player and on his day he can score with the best of them, while he’s pretty efficient on his doubles too.

Richie Edhouse or David Cameron await Noppert in round two, while on current form he has the beating of Daryl Gurney, James Wade and Gabriel Clemens, suggesting a quarter-final spot is his for the taking.

The world number nine could meet Price there but the Welshman doesn’t always get much love from the Ally Pally crowd and Noppert showed when losing 10-8 to Price at the Grand Slam in November that he can mix it with him.

On that occasion, Noppert led Price 7-4 before a 164 checkout from the Iceman changed the complexion of the match.

So if Price does falter, Noppert looks the most likely to capitalise and the prices about him winning his quarter and even the title make plenty of appeal.

Humphries the pick in second quarter

Many feel Michael Smith’s turn is edging nearer after he finally got the monkey off his back with a first Major title at the ninth attempt in the Grand Slam of Darts.

Last year’s runner-up got the better of Nathan Aspinall in that final, having previously had to play second fiddle in the UK Open and the European Championship.

But he’s priced accordingly now and he appears to have a horror draw with Joe Cullen, Damon Heta, Luke Humphries, Davie Chisnall and Stephen Bunting in his quarter.

And it’s Humphries who makes the most appeal to come through that section.

The fifth seed has been a quarter-finalist at the World Championship in three of the last four years and semi-final runs at the Grand Slam of Darts and the European Championship suggest the 27-year-old is better now than ever before.

Cool Hand Luke is a relentless scorer and his doubling is on the upgrade too, indicating that he could be primed to go all the way.

Vincent van der Voort is his likely third-round opponent before Chizzy or Bunting in round four and potentially Smith in what would be a quarter-final epic. But, at 7-2, his chances of finally making the last four at Alexandra Palace have been underestimated.