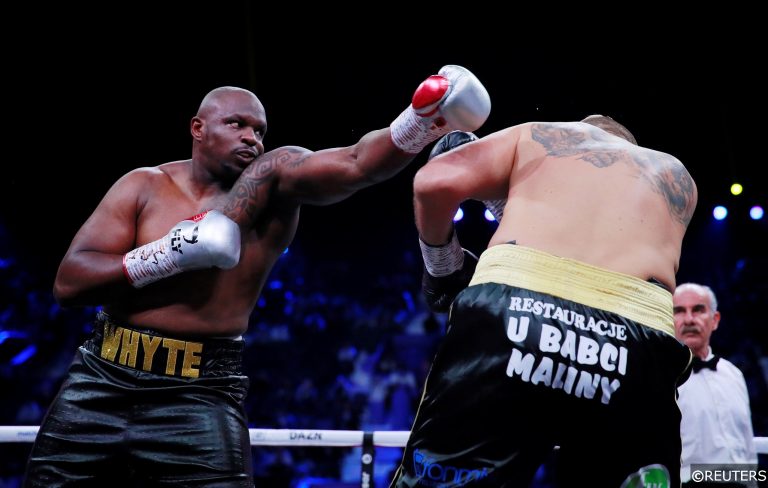 Sports fans are being treated to a whole lot of action this weekend. March Madness begins on Saturday for basketball fans, while motor sport enthusiasts can look forward to the start of the Formula 1 season in Bahrain.

Boxing fans are also being treated to a spectacle as Dillian Whyte looks to exact some revenge over Alexander Povetkin in the Rumble on the Rock in Gibraltar.

We’ve covered all you need to know ahead of this showdown, including where you can watch the rematch and betting tips and predictions for the fight.

Where to watch Alexander Povetkin vs Dillian Whyte

Povetkin vs Whyte 2 will be broadcast live on Sky Sports Box Office on Saturday 27th March. Coverage begins at 7pm UK time and the main event ringwalk is expected to start at around 10pm, but there’s plenty of undercard action to sink your teeth into before then.

The story so far

Just over seven months ago Dillian Whyte walked to the ring in Essex as a firm favourite against the then 40-year-old Alexander Povetkin but by the end of the night Whyte lay on the canvas having lost his title as interim WBC heavyweight champion.

The result doesn’t tell the whole story, however. Whyte dominated proceedings, twice knocking his opponent down before the Russian challenger landed an incredible uppercut that put the Brit on the canvas.

The rematch between the pair has already been delayed once after Povetkin was admitted to hospital with Covid-19.

Now they’re ready to face off again, this time in Gibraltar, and the winner is likely to go on to face the winner of Anthony Joshua vs Tyson Fury.

Alexander Povetkin’s fifth-round knockout of Dillian Whyte in August last year was one of the biggest shock results in recent years and one Whyte can reverse in the ‘Rumble On The Rock’ on Saturday night in Gibraltar.

The heavyweight rematch headlines the pay-per-view card live on Sky Sports Box Office and promises to be an intriguing contest.

Whyte had rebuilt his career after a devastating knockout defeat to Anthony Joshua in 2015 and worked himself into a position where he was within touching distance of a heavyweight world title shot.

He stepped through the ropes to face his Russian opponent as the number one contender for Tyson Fury’s WBC title but it all came crashing down when he was defeated.

Povetkin rose from the canvas twice before disguising a sensational uppercut to end the contest and will be confident of doing the same again.

Surprisingly, the outright prices are very similar to the original contest but Brixton boxer Whyte can land the odds this time and is fancied to gain the stoppage win late on.

Whyte boxed smartly and dominated Povetkin up until the infamous uppercut, fight fans should expect similar domination again but Whyte cautious and less gung-ho early on.

He can throw out his jab and pick off his 41-year-old opponent in the first half of the fight, before coming on strong late on and exacting his revenge.

8 wonderkids hoping to win their first cap this week