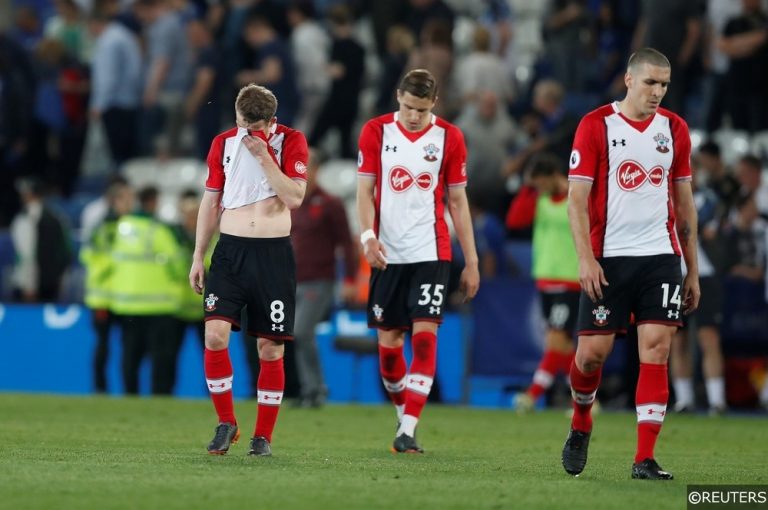 In part three of our Premier League 2017/18 Climax feature, we turn our attention to developments near the foot of the table. With under a month of Premiership football left to play, the identities of the league’s three relegated teams have yet to be confirmed. West Brom’s return to the Championship after a seven year stay in England’s top flight looks inevitable, but any other two of the six clubs above them are still at risk of joining them in English football’s second tier.

If you haven’t read part one on the race for second place or part two on the battle for Europa League qualification then we recommend having a read of them first.

From miracle escapes to startling collapses, the final few weeks of a Premier League season tend to be incredibly dramatic, and with a mere six points separating Crystal Palace in 14th and Stoke City in 19th, the battle for survival is still very much on. Let’s take a closer look at the teams involved in this year’s relegation scrap. 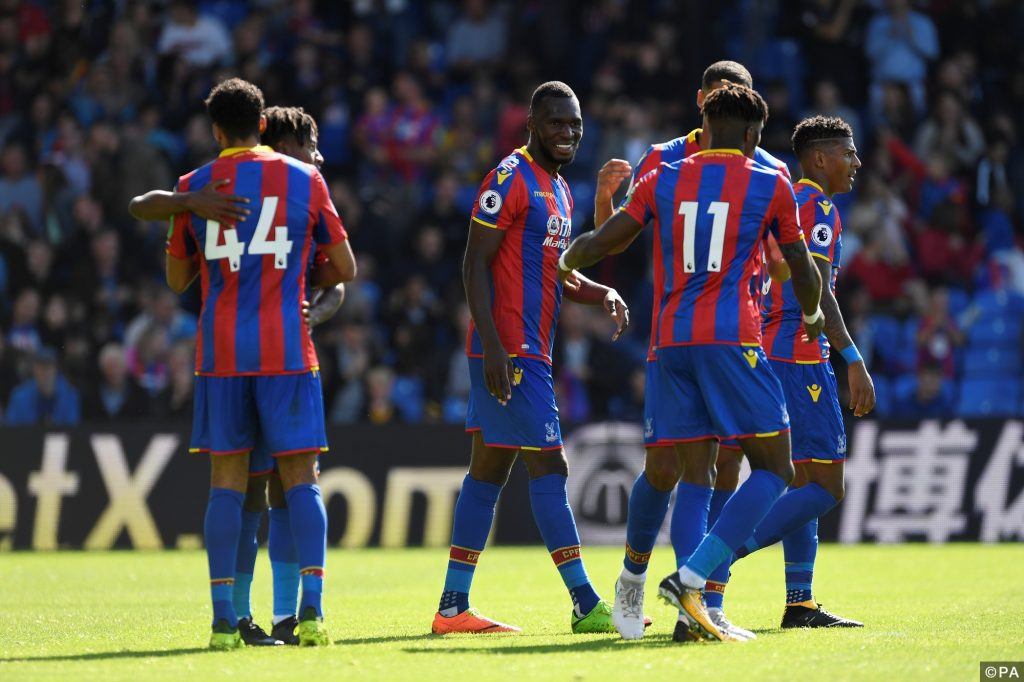 Of the remaining teams threatened by relegation, Crystal Palace are in the strongest position.  Really, the Eagles could have secured their Premier League spot long before now. Palace suffered narrow defeats against Tottenham (0-1), Man Utd (2-3), Chelsea (1-2) and Liverpool (1-2) inside the space of four weeks earlier in the year and on each occasion their performance merited at least a point.

Three of those fixtures were lost inside the last six minutes, but while many other struggling teams would have wilted in such confidence shattering circumstances, Palace have instead shown an incredible resilience. Their reverse to Liverpool remains their only defeat in five and with two of their last three games taking place at Selhurst Park, the Eagles look set for a strong finish to the season.

Further boosting their survival prospects is Crystal Palace’s unbeaten record against all three of their final Premier League opponents in 2017/18. Palace cruised past Leicester City at the King Power Stadium in December, beating the former champions 3-0 in one of their best displays of the season. They came from behind to beat Stoke City 2-1 in London back in November and took a point at West Brom in a dour 0-0 draw two weeks before that. A single victory from their remaining trio of games should be enough for Palace to avoid the drop and they could get that win as early as this weekend in their return fixture against the Foxes. 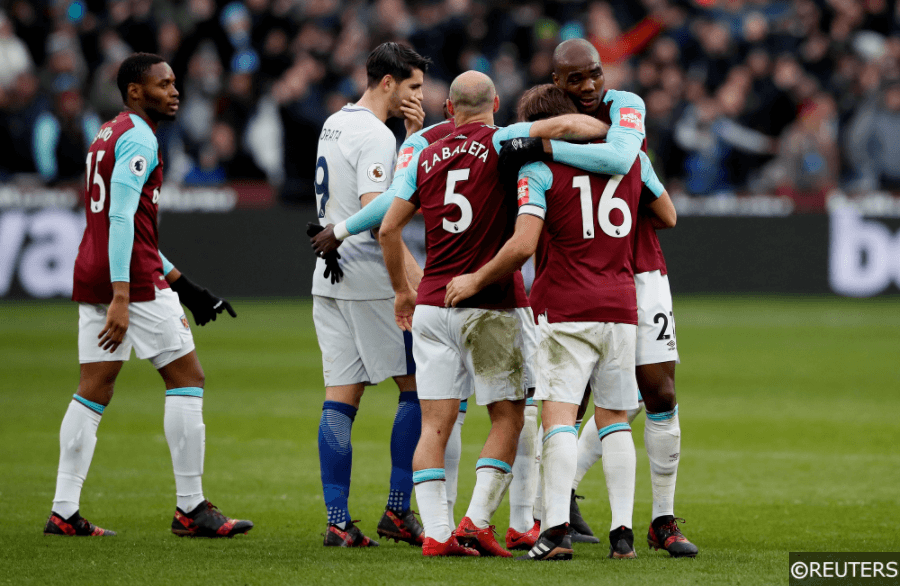 In similar vein to Crystal Palace just ahead of them in the table, one more Premier League win would almost certainly guarantee the Hammers’ top flight status. West Ham have one more game than Palace in which to collect the required points, though a tricky run-in casts major doubts about their ability to get them.

West Ham play three of their final four matches at the London Stadium, but with the atmosphere in the stands reflecting a souring of the relationship between club and fans, home advantage will mean a lot less than it did. Two of those three games in London pit West Ham against the Manchester clubs, the first of which is this weekend against Man City. That cranks up the difficulty level even further, though David Moyes can at least draw some positivity from the Hammers results on their own patch – they have been beaten just five times in sixteen Premier League games at the London Stadium.

Nevertheless, West Ham will see any points won against the Premiership’s top two as a bonus and their games at Leicester and against Everton will be where they’ll expect to do better. West Ham drew 1-1 with the Foxes earlier in the campaign and if they lose the return match at the King Power, Moyes may have to get one over on his former club Everton in the Irons final game of the season to ensure they stay up.

Huddersfield  Town are locked on thirty five points with both West Ham and Crystal Palace directly above them in the table, but while the latter pair are priced at 40/1 and 20/1 respectively to be relegated, the bookmakers have priced the Terriers at 5/1 to go down. At first glance, that might seem like a harsh assessment of their chances compared to the teams around them, but a look at Huddersfield’s final quartet of fixtures soon brings into focus the difficult task at hand for David Wagner’s side.

Town may very well need every inch of their current six point buffer to 18th place by the time the final round of Premiership fixtures rolls around. Trips to Man City and Chelsea followed by a last day clash with Arsenal could be games that yield little to nothing in terms of points for Huddersfield. Only one team in the current bottom seven has a worse goal difference than Huddersfield and better teams than them have been ripped apart at the Etihad and Stamford Bridge this season.

It means that this weekend’s game against Everton suddenly ramps up in importance. It is a must win? Huddersfield will unquestionably have to approach the contest in that manner. A win against the Toffees at the John Smith’s stadium will help to pour cold water on any panic in the Huddersfield ranks, but anything less could spell big trouble for the Terriers. 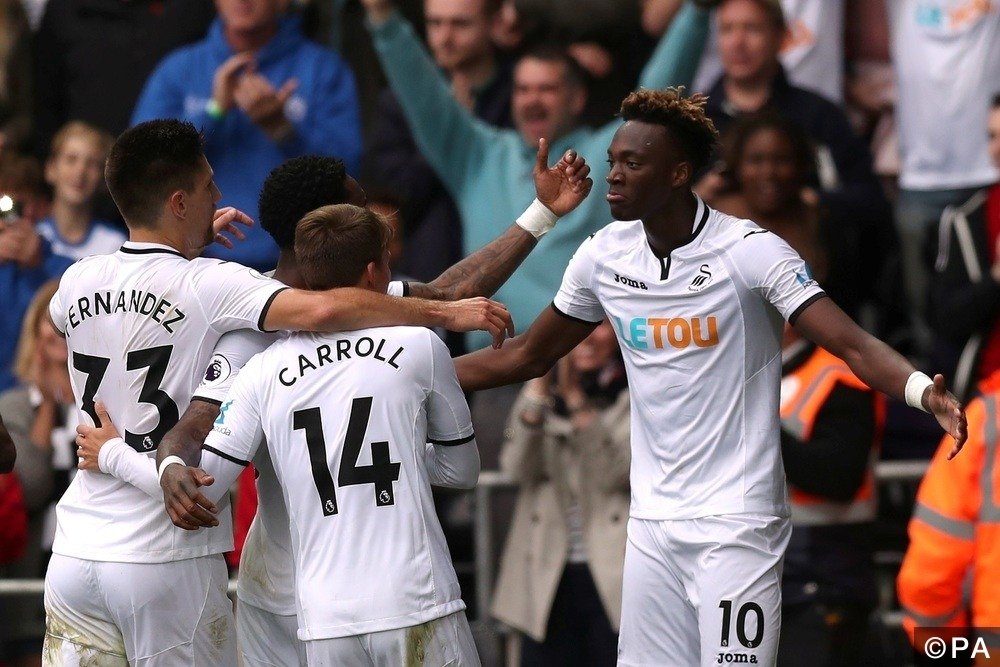 Swansea City are without a win in six ahead of their game against Chelsea this weekend. Incredibly, the Swans had lost just one of their fourteen matches before that; though they couldn’t sustain their excellent run long enough to drag themselves clear of trouble. Games against Tottenham, Man Utd and Man City inside their last six fixtures may have helped to paint an unrealistically negative picture of their current form, but the Swans still need to find their feet again fast.

After a dismal start to their 2017/18 campaign, Swansea showed manager Paul Clement the door, temporarily replacing him with club legend Leon Britton, who was in turn replaced by the enigmatic Portuguese Coach Carlos Carvalhal just before the turn of the year. Although his appointment raised plenty of eyebrows at the time, Carvalhal has proven an inspired choice, dragging Swansea from what looked like an inescapable fate to the cusp of survival with four games remaining.

Three of Swansea’s final four matches are scheduled to be played at the Liberty Stadium and while that’s undoubtedly a major plus, the identity of their opponents in their final two fixtures is an even bigger boost. Southampton in 18th and Stoke City in 19th are the biggest threats to Swansea’s Premier League status. In either contest, the Swans could be presented with an opportunity to rescue themselves while simultaneously laying waste to their rivals’ survival hopes. Naturally, both Southampton and Stoke City will be thinking along the same lines, but having lost just one of their last nine in Wales, Swansea will definitely be in the driving seat. 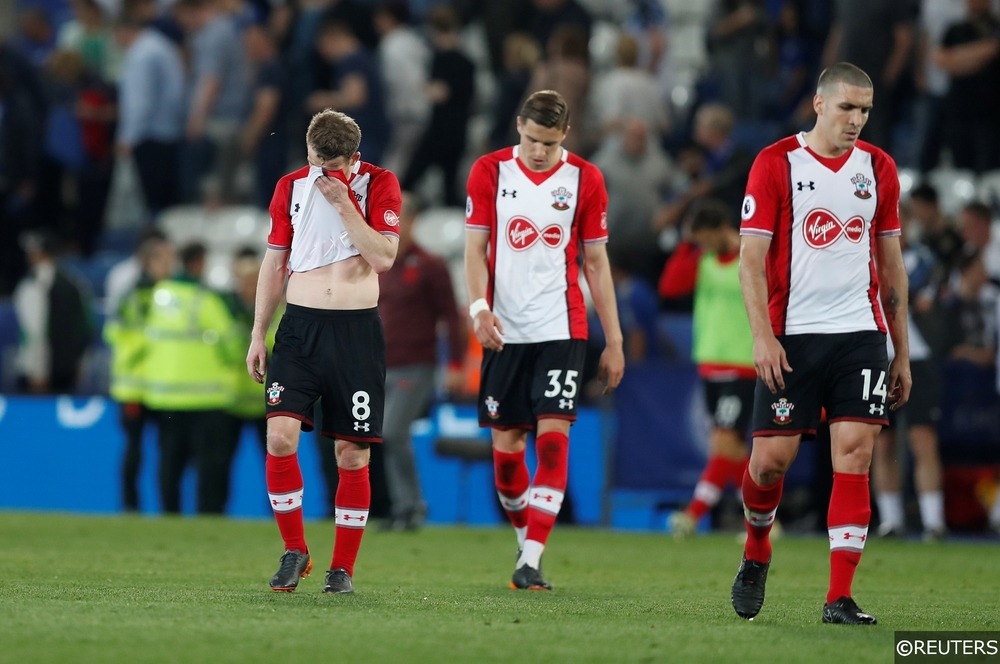 Having finished in 7th, 6th and 8th in their last three seasons, nobody would have expected Southampton to be so close to a Premier League exit with four games to go in 2017/18. It could be that Southampton’s talent-draining, develop and sell transfer policy finally caught up with them, though some strange managerial appointments and decisions didn’t help either.

The Saints started the campaign with Argentinean Mauricio Pellegrino in the hot seat but any enthusiasm about their prospects soon evaporated after the team’s poor early season showing. Southampton failed to score in four of their first six league matches, a sequence that set the trend for a poor finish to the year. When Southampton did eventually part with Pellegrino in early March of 2018, it was at the end of a run of just two defeats in eleven. The timing felt strange given their upturn in fortunes and even stranger still was their decision to draft in Mark Hughes on a short term contract just two months after the Welshman had been sacked by Stoke just below the Saints in the table.

Southampton have won just one game in six since Hughes was given the job and that victory came at League One Wigan in the FA Cup. In the Premier League, the Saints have taken just three points from the last twenty one available, and they will have to find a way to better that haul inside the space of just four matches from now until the end of the season. Southampton will hope to be within touching distance of Swansea by the time they play them on May 8th, but even if they can somehow get out in front of the Swans, they risk having all their good work undone on the final day by a record chasing Manchester City side. It’s not looking good for the Saints. 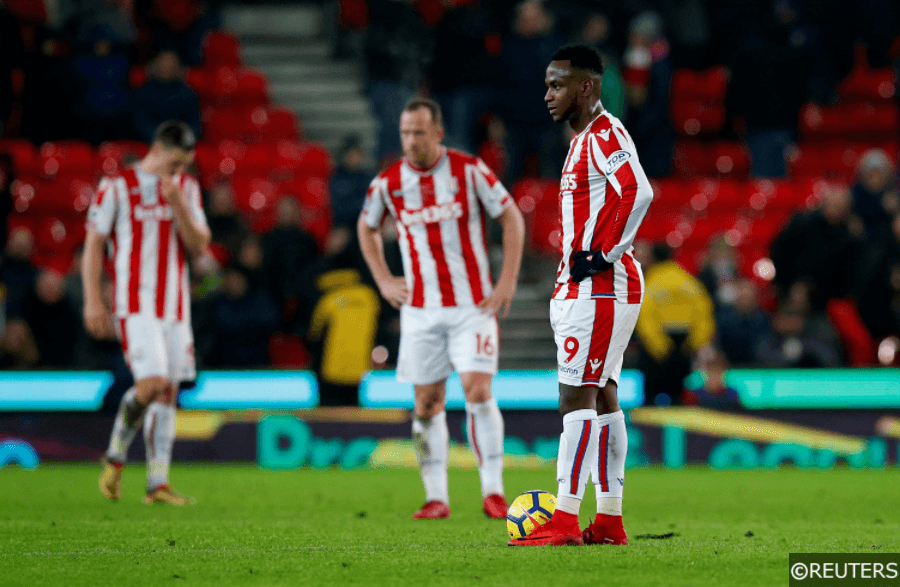 The 2017/18 season started off so brightly for Stoke City, who lost just one of the opening five fixtures of their campaign. Inside the first month of their league calendar, they took points off Arsenal and then Man Utd at the Britannia, though five defeats in their next six soon darkened the mood. 0-4 and 2-7 hammerings by Chelsea and Man City respectively were the first of a number of drubbings for the Potters, who have conceded more goals than any other team in the league this season with sixty five.

With Mark Hughes unable to get anything out of a talented squad that includes Xerdan Shaqiri, Joe Allen, Saido Berahino, Jack Butland and Ryan Shawcross, the Welshman was shown the door after Stoke’s embarrassing FA Cup exit to Coventry City on January 6th.  Journeyman coach Paul Lambert, who was sacked from his last three jobs, was the man chosen to save Stoke’s ailing season, but under his management the Potters have won just one in twelve.

Having battled to just one Premier League victory in total in 2018, it would take something incredible for Stoke to turn around a four point deficit and a horrific goal difference inside their last three fixtures. Stoke already have one foot out the door and a defeat on Saturday against Jurgen Klopp’s exciting Liverpool side should see their fate finally sealed.

Whose days are numbered?

We have seen some miraculous escapes in the Premier League, but if Stoke can somehow fight their way to safety this season, it would rank at the top of the list for last gasp reprieves. A defeat for the Potters at Liverpool this weekend and a win for Swansea in their home game with Chelsea would see their relegation confirmed – they are hanging by a thread that thin. However, even if they avoid the drop this week, it’s really just delaying the inevitable and we think they will be joined in the Championship by Southampton.

The Saints could conceivably win their next two at home to Bournemouth and away to Everton – results that would keep them close enough to Swansea ahead of their clash on May 8th. But even if they can leapfrog the Swans before the last game of the Premier League season, their chances of getting anything against Man City in game thirty eight are incredibly slim. Swansea’s task looks infinitely easier against what will probably be an already relegated Stoke City team at the Liberty Stadium. If it comes to a head-to-head between Southampton and Swansea on the final day, where the team with the best result survives, there will only be one winner.