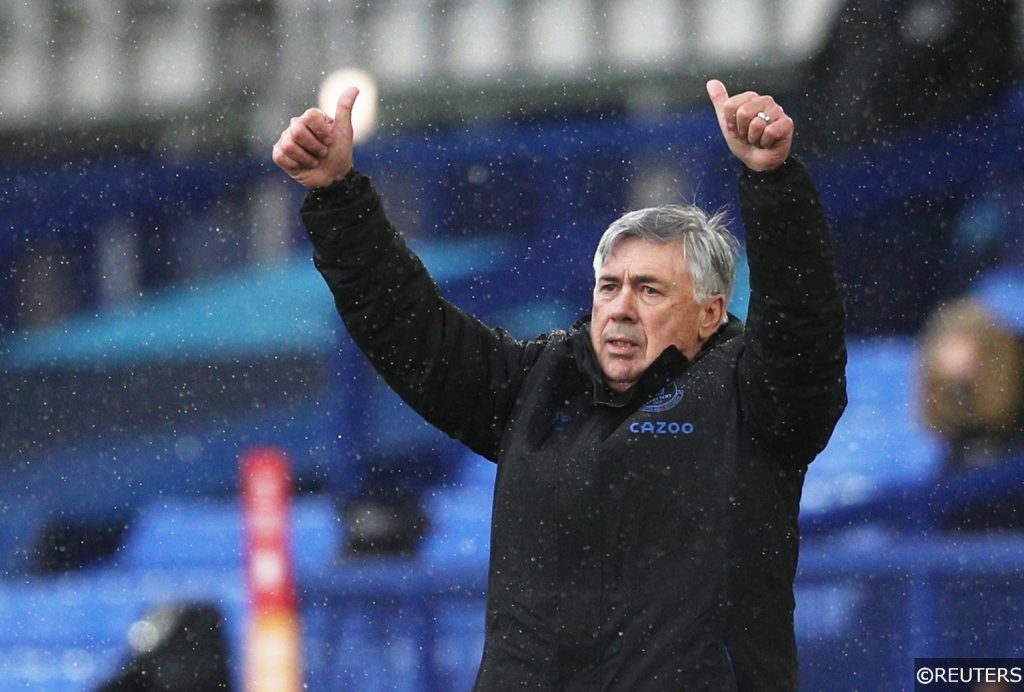 The Premier League launches a three-pronged attack on the senses today, with a trio of tantalising top-flight tussles stuffed into a stellar looking Sunday afternoon.

First up, early pace setters Everton take their unbeaten streak to the south coast to take on Southampton, before a Wolves team finding form welcome Newcastle to Molineux shortly after.

In the day’s final contest, Arsenal and Leicester meet at the Emirates in a Sunday showdown that promises to produce fireworks at the Emirates, with kick-off pencilled in for 19:45 pm in the capital.

Ahead of Sunday’s action, we’ve combed through Betfair’s superb #OddsOnThat specials for today’s games to pick our some of our favourite bets.

Check them out below and remember – you can find detailed match previews and betting tips for each of Sunday’s matches on our Premier League predictions page.

Arsenal, Everton and Leicester to score 6 or more goals combined @12/5

Premier League fixtures have been remarkably goal-laden this season, and the campaign’s thrilling matches are averaging a huge 3.45 goals per 90 minutes since the summer.

With 4.6 and 2.4 goals scored per top-tier test so far this term respectively. Everton and Leicester have been doing their bit to keep the division’s numbers high, and while Arsenal’s 1.6 goals per game average is low in comparison, all three averages combined push us well past the targeted tally in our first #OOT selection.

In their match previews for Southampton vs Everton and Arsenal vs Leicester today, our analysts have tipped six goals to be notched in their correct score predictions – a total that would land our first #OddsOnThat pick at 12/5.

Four ultra-competitive bone-crunchers make an appearance in our next #OddsOnThat choice as we delve into the individual cards markets for Sunday’s Premier League fixtures.

Southampton’s steely Spaniard Oriol Romeu has already been cautioned twice in five games for the Saints this season and later today, the 29-year-old will line up against Everton’s combative Abdoulaye Doucoure, who has already been booked once for the Toffees this term.

Romain Saiss has somehow steered clear of trouble for Wolves so far this season, though the Moroccan was booked a massive 10 times in the Premier League in 2019/20 and his first card of the new campaign could arrive against Newcastle.

Controversial Arsenal midfielder Granit Xhaka also collected double figure yellow cards in the Premier League last season, and while his record looks cleaner this time around, we expect his defensive workload to be high against clever counter-punchers Leicester later on.

A number of in-form strikers will feature in today’s Premier League progamme, and punters can piggyback on their purple patches in our next #OddsOnThat pick-out.

Auba’s teammate Alexandre Lacazette is out on his own as the club’s leading scorer in the league on three goals, while Everton’s Dominic Calvert-Lewin is among Europe’s most lethal finishers at the moment after a run of seven goals in five Premier League starts.

We need just three of the aforementioned centre-forwards to notch today for our bet to land at a tasty looking 17/10.

In our Southampton vs Everton match preview, we’ve tipped the Toffees to notch three times against a Saints outfit that shipped three times at Chelsea and five at home to Spurs in recent weeks.

Leicester City meanwhile, have shown they have the tools to unlock Arsenal’s defence in recent seasons, and the Foxes’ ability to spring forward quickly from deep should lead to opportunities at the Emirates.

Newcastle remain modest goalscorers, though the Magpies did mange to register at least once in seven of their eight competitive fixtures this season, and Steve Bruce’s charges look capable of crafting a chance or two at Molineux against Wolves.