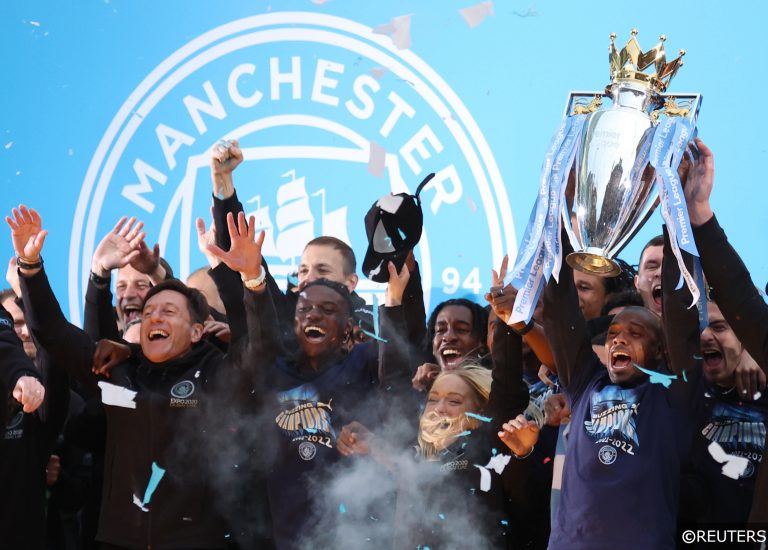 The World Cup came to a climactic end on Sunday night and, in unprecedented fashion, we can now turn our attentions back to the imminent return of the Premier League.

It’s going to be a hectic dash to the end of the season, so what better time to delve into the outrights market and cast our gaze towards the rest of the domestic season, especially after landing a bunch of tasty outright tips in the World Cup!

It looks to be a two-horse race at the top of the Premier League and I fancy current leaders Arsenal at an attractive price.

Manchester City may be slight favourites but they do not deserve to be 2/5 favourites. They are five points adrift of the Gunners and have the Champions League to focus on, while Mikel Arteta can afford to put almost all his attention on the Premier League.

Not only that, but Manchester City players played a league-high 4,625 minutes at the World Cup, with Arsenal representatives playing just 1,703 minutes.

Gabriel Jesus will be a big miss over the next few months after picking up an injury but it is worth noting the Brazilian forward, after a sensational start to life at the Emirates, hasn’t scored in any of his last 11 appearances for Arsenal and has just two assists to his name in that period.

Everybody expected the newly enriched Newcastle to start moving up the table, but not many predicted such a drastic improvement in fortunes.

Eddie Howe has completely transformed the side, moulding it into a cohesive unit capable of taking on anybody. They head into Boxing Day’s round of fixtures just two points adrift of Manchester City and with a four-point cushion inside the top four.

They are unbeaten since August, winning seven of their ten matches since and conceding just five goals. The Magpies have an effectively bottomless transfer kitty for January, no European football to distract them and only two teams saw their players fielded for fewer World Cup minutes than Newcastle’s 458 minutes.

The stage is set for the Saudi-led team to break into the big time.

With 18 goals already and a restful mid-season break under his belt, only a major injury can stop Erling Braut Haaland from taking the Golden Boot this season but the top goalscorer without Haaland market offers some tasty prices.

Harry Kane is the leader with 12 goals, but eachway selections pay out the top three and Fulham striker Aleksandar Mitrovic occupies the last of the paying positions and is offered at a hefty 18/1.

Mitrovic has nine goals – just three behind Kane – and the only other player above him is Ivan Toney, who could well be in for a lengthy suspension after being charged with breaches of betting rules.

Mitrovic returned to the Premier League off the back of a record-breaking Championship season and scored twice in the World Cup. He has found the net in 12 competitive matches for club and country since the start of the season and looks worth a punt.

The Leicester hierarchy’s faith in Brendan Rodgers looks to have paid off and the Foxes have recovered well after a dreadful start to the campaign.

They entered the World Cup break with five wins from their last six games in all competitions, pushing them up to 13th in the table and just two points off the top half.

Given their quality and form, I expect them to outperform the likes of Crystal Palace, Aston Villa and Brentford over the remainder of the season and that should be enough to secure a top-half finish.

Premier League relegation prediction – Wolves to be relegated at 10/11

Wolves may have Julen Lopetegui on board but there is not much to like about their squad or their form and I cannot see them bridging the four-point gap between themselves and safety.

They have managed just ten points this season and are the only team to remain in single figures for goals scored.

Wolves’ only wins this season have come against the other two sides in the relegation zone and they have scored more than once in just one league game since May.

Premier League relegation prediction – Southampton to be relegated at 13/8

Southampton finally lost patience with Ralph Hasenhuttl but I don’t expect his successor, Nathan Jones, to fare much better at St Mary’s Stadium.

The Saints sit two points shy of safety and have only won three league games this season and Nathan Jones didn’t exactly set the footballing world alight the last time he left Luton.

The Welshman has enjoyed two very successful spells at Luton but he lasted just ten months in charge of Stoke in 2019, winning only six of his 38 games in charge. He could find it a similarly difficult step when he moves to the south coast.