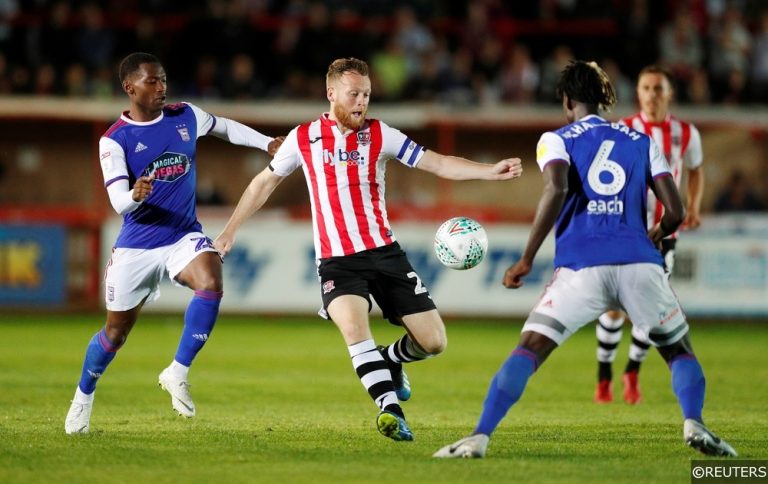 It’s Bank Holiday weekend and that can mean only one thing, a feast of football for us to enjoy. Down in League Two there is a full fixture list on Saturday for us to get our teeth into and in our preview we look at where the headlines might be come 5pm on Saturday.

Paul Tisdale departed Exeter City in the summer to take up managerial duties at Milton Keynes Dons, and this weekend sees him face off against his former employers for the first time. Both clubs have made unbeaten starts, with the Dons winning two and drawing two so far, but the Grecians are top of the table with 10 points from a possible 12 under new boss Matt Taylor.

It promises to be a clash with action at both ends and the fact that neither side has suffered defeat this season means that they will both go into the match fully expecting to come away with all three points. However, recent history doesn’t favour the visitors. Exeter are yet to get the better of MK Dons in any competition over the years, losing six of the eight meetings.

Speaking of the managerial merry-go-round, Cheltenham Town became the first side in the fourth tier to pull the trigger on their manager as they parted company with Gary Johnson earlier this week. The Robins managed to earn their first point of the new season in midweek, earning a 1-1 draw at newly promoted Macclesfield Town, but that wasn’t enough to keep Johnson in the job.

Johnson, who successfully guided the Robins back to the EFL in 2015/16, was the ninth longest-serving manager in the EFL before Tuesday night’s Whaddon Road departure, but it’s now up to caretaker boss Russ Milton to help the club pick up three points this weekend.

First up for Milton is the trip to the Abbey Stadium as they face off against a Cambridge United side who have also had their troubles so far this season. The sides last met in a seven-goal thriller back in April, and it was the U’s who came out on top that day. The omens are not good for the visitors as they have won just once in their six visits to the Abbey Stadium, but with fresh leadership they will be hoping that is a record which can be improved on this weekend.

Both of these sides were among the bookies’ favourites for promotion at the start of the season and this weekend they meet at Sincil Bank. The Imps have enjoyed an excellent start to the campaign and they are currently sitting second in the league having not tasted defeat thus far. Meanwhile, Kevin Nolan’s men are rooted to the bottom of the table with just one point to their name after a disastrous start.

Whilst the Magpies have stuck with their manager, their fans are becoming more and more frustrated with the form their side have shown and their patience is already running thin. With this in mind then, a win at the weekend will surely go a long way to building bridges with their disillusioned faithful.

After suffering relegation, it can take quite a while for a side to re-adjust to their new level and start playing their best football. However, this weekend Northampton Town have the opportunity to earn their first victory of the new campaign when they make the trip to the Colchester Community Stadium to face off against a Colchester side who are looking pretty strong at the moment.

Colchester United hit Crewe Alexandra for six in midweek to emphasize just how good they are looking at the moment. On the opening weekend of the season Colchester showed their steel as they held our pick for the League Two title this season, Notts County, to a 0-0 draw, and they built on their success in that fixture with a 2-0 win over a Port Vale side we also expect to have a good season. A defeat on penalties in the League Cup was followed by a draw with another of the title favourites, Mansfield Town, but Tuesday’s emphatic 6-0 win over Cambridge showed that they are a force to be reckoned with this season.

The second season syndrome is a curse which often haunts a side who have had a successful term first time out, but even though Forest Green Rovers had a solid season in their first ever campaign in the Football League, they have started this season in good fashion. This weekend they have the opportunity to continue their excellent start to the campaign when they welcome Swindon Town to The New Lawn.

The hosts stated their intent from the very first game as they saw off Grimsby Town after a strong second half showing which eventually saw them run out 4-1 victors. Three draws in a row in the league has perhaps stunted that momentum but a 1-0 win away at Swindon in the League Cup shows that they are a force on their day, although their visitors will surely be looking for some revenge.